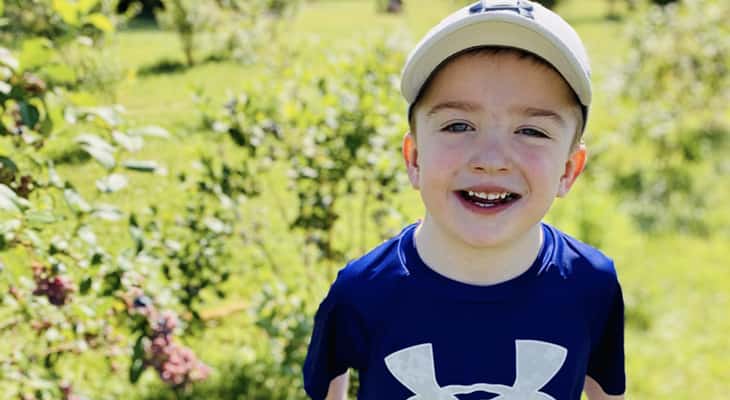 As Audrey Sims talks on the phone, her 7-year-old twin boys can be heard enthusiastically enjoying the video game they are playing upstairs.

“We picked up video games when the pandemic hit,” Audrey said. “It is something they could do while quarantined and inside. They also like Legos. Luckily, neither of them is ever alone, and they are best friends. They get stressed out if they have to be separated from each other.”

What makes this commonplace scene at home extraordinary is that one of the boys, Aiden, has had two major heart surgeries in his young life.

After an anatomy scan at 19 weeks and other tests, Audrey and her husband, Andrew, learned Aiden had Ebstein anomaly, a major abnormality of one of the heart valves, as well as a hole in the heart called a ventricular septal defect.

At 10 months, Aiden underwent bidirectional Glenn shunt surgery, performed by Erle H. Austin III, M.D., pediatric cardiothoracic surgeon Norton Children’s Heart Institute, affiliated with the UofL School of Medicine. Dr. Austin was then-chief of pediatric cardiac surgery at Norton Children’s Hospital. The operation connects the superior vena cava to the pulmonary arteries. This diverts oxygen-poor blood returning from the head and neck away from Aiden’s weakened heart and directly to the lungs where it can pick up oxygen. But, typically, blood returning from the rest of the body is still not getting all the oxygen it needs.

“He did well with that,” Dr. Austin said. “He still had ‘blue’ [oxygen-poor] blood mixing inside his heart. We’ve learned patients who function with one pumping chamber benefit from staged procedures, with the final stage a Fontan operation.”

In October 2018, at just 3 years old, Aiden underwent Fontan surgery, which redirects oxygen-poor blood from the lower body into the pulmonary arteries.

“Aiden doesn’t remember a lot about what happened,” Audrey said. “He remembers being at the hospital on Halloween, getting toys and seeing Spiderman. He doesn’t talk about the more stressful parts of his hospital stay.”

Since the surgery more than three years ago, Aiden’s heart has been stable and under the care of Brian J. Holland, M.D., pediatric cardiologist with Norton Children’s Heart Institute.

The only real ongoing effect of Aiden’s condition is low oxygen saturation, which makes respiratory viruses particularly risky for him, at times requiring additional visits to Norton Children’s Hospital.

“We feel at home there, but I’m happy we haven’t had to be there in a while,” Audrey said. “I have kept in touch with several nurses [in the neonatal intensive care unit, where both Aiden and his twin, Jaxon, spent their first six weeks of life] and communicate regularly through social media.”

Life as a survivor

Due to Aiden’s oxygen issues, Audrey and Andrew at one time feared he could be cognitively delayed. They are happy to report today those fears proved to be unfounded.

“He reads above grade level and has never shown a sign of delay,” Audrey said. “We realized that just because something is a risk, it isn’t always going to be that way. He’s definitely an overcomer. We’ve been very blessed by that.”

Today, Audrey is grateful for the continuing support she receives from the team at Norton Children’s, especially the coordination between departments so both boys’ appointments are on the same day, requiring only one drive to Louisville from their home in Madison, Indiana.

“Aiden is super-resilient,” Audrey said. “You can put your faith in your child’s ability to take on the challenges that are ahead of them. He’s never let it make him different than anyone else.”

When asked about his favorite things to do, Aiden quickly expressed his love for video games. A favorite game is more difficult to identify.

“Fortnite, for sure,” Aiden said. “Or Mario Smash Brothers. Or maybe basketball.”

An apt demonstration of how beautifully typical this very special 7-year-old truly is.