After heart transplant, girl takes her story to Washington

After heart transplant, girl takes her story to Washington

Scharnese Cook will meet with legislators, see the sites 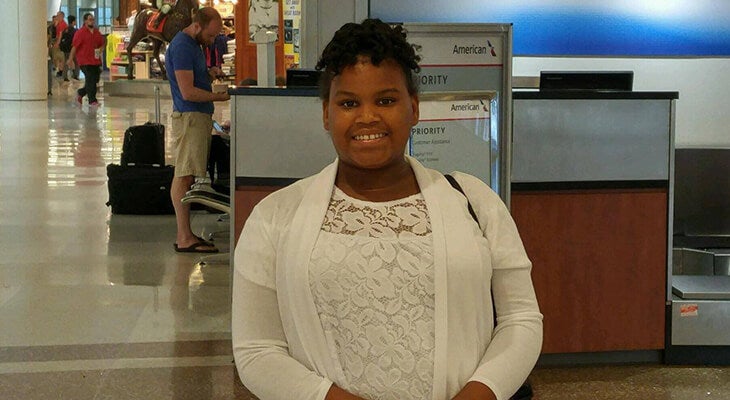 At age 8, Scharnese Cook was very active. She ran track at school and was involved in various activities. In May 2015, she began to have trouble breathing. At first, it appeared to be a severe asthma attack. The situation became critical when emergency medical personnel found that her pulse was much too rapid. A chest X-ray revealed that Scharnese had an enlarged heart.

“As a former director of a youth center, I had seen children who had enlarged hearts,” said Scharnese’s mother, Shilese Stover. “I knew this was something we needed to get looked at right away.”

Tests at the Norton Children’s Hospital emergency department revealed Scharnese had congestive heart failure. Doctors diagnosed dilated cardiomyopathy. Her heart chambers were enlarged and her heart was pumping only one-fourth the normal amount of blood.

“I didn’t believe it,” Stover said. “There was no way a child I knew to be healthy could be in heart failure. She had just run a track meet and I was around her every day!”

Heart failure is a term used to describe an inability of the heart to pump blood properly.

“Heart failure can occur in people of all ages,” said Joshua Sparks, M.D., medical director for the advanced heart failure program at the Norton Children’s Hospital Heart Center and pediatric cardiologist with University of Louisville Physicians. “It’s not uncommon for earlier signs of heart failure in children to mimic other conditions such as asthma, reflux or even viral illness.

“She actually started reassuring me”

“At least half of children with heart failure are diagnosed when it is fairly advanced.”

Scharnese will be in the nation’s capital this week talking to lawmakers about children’s health needs as part this year’s Speak Now for Kids Family Advocacy Day.

Heart failure can be due to congenital heart disease, infections or inherited or metabolic conditions. In around half of all cases, including Scharnese’s, there is no apparent cause.

Scharnese was admitted to Norton Children’s Hospital’s “Just for Kids” Critical Care Center, where she was put on medication to control her symptoms. The medication worked initially, but after a week, she started passing out in the hospital.

Back home after eight weeks

“She didn’t understand why everyone was around her bed fussing, and she actually started reassuring me that she’d be fine,” Stover said. “But then she passed out again.”

Losing consciousness was caused by her heart stopping, according to Dr. Sparks.

“Scharnese and I were playing a game and the next thing I knew I was signing paperwork for the heart transplant list,” Stover said.

A ventricular assist device was inserted in her heart to help pump blood through her body. She was able to move around, eat and get stronger while waiting for a donor heart.

“We estimate that around 300 children in Kentucky suffer from heart failure each year,” Dr. Sparks said. “The majority can be treated with medication alone but some require surgery. A small percentage require advanced therapies such as VADs and heart transplants. At the Norton Children’s Hospital Heart Center, we can address any need a child has.”

After about four weeks on the VAD, on June 26, 2016, specialists at Norton Children’s Hospital and UofL Physicians performed a heart transplant. Just two weeks later, Scharnese was home from the hospital — only eight weeks after the ordeal began.

This week, Scharnese will celebrate her 11th birthday in Washington, D.C. She’s there telling members of Congress about her personal story and how Norton Children’s Hospital has helped her.

“Patients who have had heart transplants can play sports, go to school and church, and essentially do everything they want with very few limitations,” Dr. Sparks said. “But it’s important to know the transplant is not a cure. There are still daily medications plus procedures and testing.”

Scharnese and her mother, Shilese, made it to Washington, DC with the Norton Children's team to represent the children's…