Depending on the severity, pediatric orthopedists will recommend different approaches to treating scoliosis within three broad options. 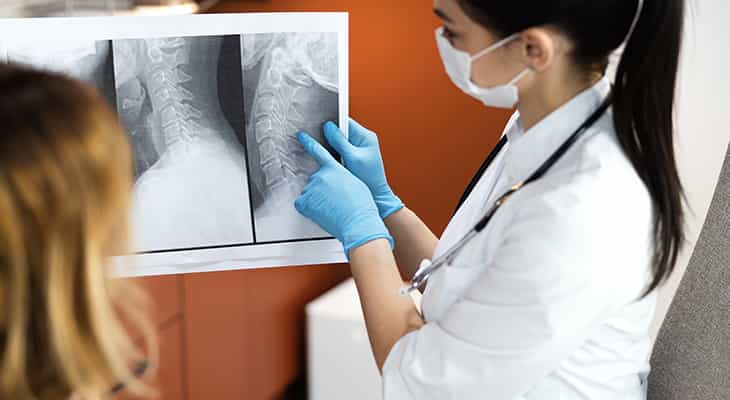 There are three basic ways to treat scoliosis in kids, depending on whether they are still growing and the severity of the curve.

When viewed from the side, the spine needs to have some curve to it, in both the upper and lower back. But with idiopathic scoliosis — scoliosis with no known cause — the spine can curve dramatically when viewed from the front or back. The severity of that potentially harmful curve will signal which treatment path to pursue.

How to treat scoliosis

Less than 10-degree curve –This is termed “spinal asymmetry and the patient wouldn’t need treatment by a pediatric orthopedist.

Curve of 10 to 25 degrees and still growing – Observed with regular X-rays and clinical exams to determine whether it’s worsening or improving with growth. Observation is typically the path taken in children whose bones and soft tissue have not matured.

A 25- to 45-degree curve in children with growth remaining – Bracing is usually best for these patients. Numerous options for braces, depending on your child’s condition, are available, including ones that can be worn under clothing.

Curve of greater than 45-50 degrees – This is severe enough that surgery often may be recommended. The standard procedure, a spinal fusion, is performed with metal rods attached to the spine. This allows bone to grow around the rods and “fuse” — holding the spine in place much like a cast holds a broken bone in place to heal.

The range of surgical options is wide, with new advances that can include precise 3D modeling of your child’s spine, which assists in placement of the metal hardware in the spine.

The advantages of early treatment of scoliosis

“If you have a lot of growth remaining, you have a much higher chance of curve progression,” said Joshua W. Meier, M.D., pediatric orthopedic surgeon with Norton Children’s Orthopedics of Louisville, affiliated with the UofL School of Medicine. “It’s not unusual to see a 10-year-old girl with a curve of about 15 degrees progress to about 25 degrees in a year and greater than 30 degrees by the time she’s 12.”

By contrast, a teenage girl whose skeletal system has been mature for at least a year could have a 30 degree curve that doesn’t progress. But curves of 50 degrees or more can get worse by a degree or so per year as the child ages. A 15-year-old with a 50 degree curve can expect to be at 80 degrees or more by the time they reach their late 40s.

The No. 1 goal of spinal fusion is to stop the curve’s progression. Secondarily, surgery can improve the curvature, decrease a rib hump on the back and improve spinal balance — leaning heavily one way or the other — and maintain the proper lumbar and thoracic curves.

Using a 3D printer, a model of the patient’s spine can be created and used in the operating room to give more perspectives on the spinal structure and test exactly how to place equipment that will guide the surgeon while attaching the rods.

While spine surgery can be performed with a high degree of safety and reliability, methods can be helpful for some patients.