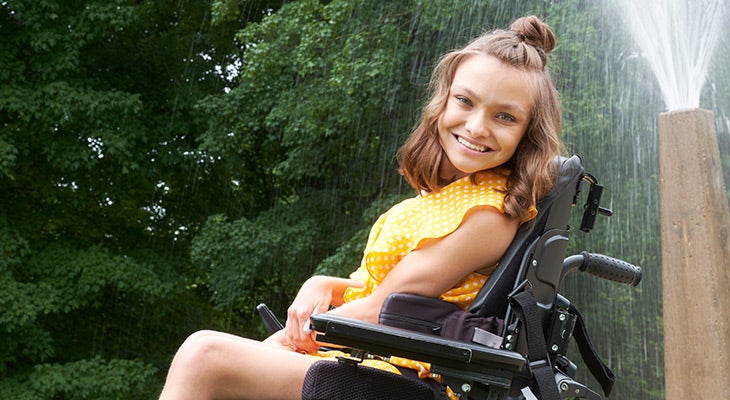 Gracie Latkovski is sitting up straighter and breathing easier after undergoing state-of-the-art spine surgery. Her surgeons were able to be precise in her complex surgery by preparing with the help of a 3D printed replica of the 14-year-old’s spine.

“Health-wise, it has helped her tremendously,” said Christin Latkovski, Gracie’s mother. “We are totally excited about what it has done for her.”

In addition to having scoliosis, Gracie has cystic fibrosis and cerebral palsy, and she uses a wheelchair. Gracie and her family live in Bullitt County outside of Louisville.

Gracie’s spinal surgery used new Firefly technology to address a spine severely bent and curved by scoliosis. The Firefly software converts computed tomography (CT) images of a patient’s spine into digital files that can be printed using a 3D printer.

“Without surgery, the curving of her spine eventually would have affected her lungs,” said Joshua W. Meier, M.D., a pediatric orthopedic surgeon with Norton Children’s Orthopedics of Louisville.

A 3D model of Gracie’s spine was used to create custom-made drill guides for each of her affected vertebra. Dr. Meier and his partner Kent L. Walker, D.O., also a pediatric orthopedic surgeon with Norton Children’s Orthopedics of Louisville, used the guides to implant surgical screws. These pedicle screws are placed into the vertebrae, and a rod connects the screws, allowing the spine to fuse in place.

“The result of the 3D printed models and guides is increased accuracy and increased safety putting those screws in,” Dr. Meier said. “The surgery is also quicker, meaning less time under anesthesia and a lower risk for infection and bleeding.”

“She loves being taller and it helps her breathe,” Christin said. “She was pretty much leaned over to one side. Straightening her up has really helped her so much.”

According to Dr. Meier, not all back surgeries require the Firefly technology, but it was a valuable tool in a case like Gracie’s.

“She had a lot of curvature in her spine and lot of rotation,” he said. “Her case would have been a fair amount more challenging without the Firefly technology.”

The technology is new, with the Firefly guides receiving approval from the Food and Drug Administration within about the last two years.

According to Dr. Meier, using 3D printed models of an individual patient’s spine was not even on the radar when he graduated from medical school in 2002.

“I’m not even sure 3D printing existed then,” Dr. Meier said.

“It was unbelievable what her spine looked like,” Christin said, adding that the final decision whether to undergo back surgery was Gracie’s.

“She said, ‘I’m ready. I want to do it. I don’t want to be like this the rest of my life,’” Christin said. “There’s nothing stopping this girl.”

As evidence, Christin points to a 2013 YouTube video showing Gracie and her older sister, Quincy, dancing together. Gracie performs her moves with the help of a motorized wheelchair. The video has more than 4 million views.

After surgery, Gracie, now a ninth-grader, was using her cellphone to make a video of her own, recording X-rays showing the hardware in her spine.

“She said she looked like a Transformer,” Christin said.

A “Transformer” transformed by surgery using the latest technology.