The recommended scoliosis screening age is the preteen years, which often allows any spinal curve that needs treatment to be corrected with a brace, reducing the likelihood of surgery later on. 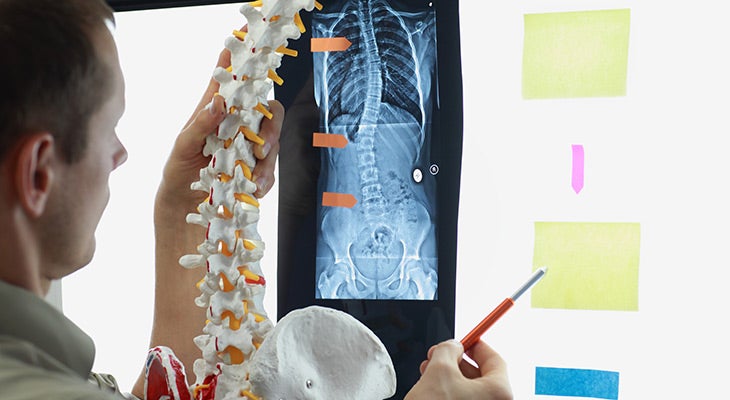 The typical scoliosis screening age starts about age 10, as the screening is most helpful during an adolescent’s growth spurt. If your health care provider detects a curve in the spine that needs treatment, a brace will often correct the condition at this age and can prevent the need for surgery later in life.

Girls are much more likely than boys to have scoliosis. It also runs in families, so if a relative of your child has scoliosis, you should get your child checked by your pediatrician.

Scoliosis — a curvature of the spine — is a fairly common condition that often doesn’t require treatment. But if the curve is severe enough, scoliosis treatment may involve bracing or even surgery.

“Depending on the location and magnitude of the curve, we can often treat scoliosis with braces that are worn under the clothing and don’t bring unwanted attention to a young person,” said Kent L. Walker, D.O., a pediatric orthopedic surgeon with Norton Children’s Orthopedics of Louisville.

Pediatric orthopedists refer to summer as “scoliosis season” because many children will undergo procedures while school is out, allowing time for recovery before school begins again.

Scoliosis is often subtle in children and if left untreated, can get worse with growth. The result can be an uncomfortable lean and could compact internal organs.

Ask your pediatrician to look for a spine curvature, especially if you have a family history. A scoliosis screening is simple and painless at any age.