Avery Conover has had two of three planned surgeries and multiple heart catheterizations to address her single ventricle heart defect. 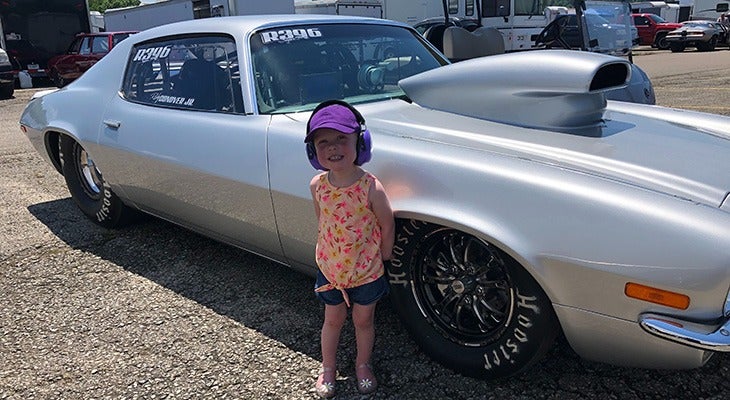 Avery Conover says she wants to drag race someday, just like her father, Ricky Conover. According to her mother, Kayla Conover, Avery is very independent and doesn’t give up. Kayla says that fighting spirit is how Avery has weathered surgeries and care of a single ventricle congenital heart defect.

Kayla was surprised at her 20-week anatomy scan — her OB/GYN told her that she couldn’t see the four chambers of her baby’s heart.

Because of that, Kayla was referred to Norton Children’s Maternal-Fetal Medicine, where specialists have expertise in treating mom and baby and during complex, high-risk pregnancies. To monitor Avery’s heart issue, Kayla worked with pediatric cardiologist Lucinda T. Wright, M.D., and other members of the fetal cardiology team at Norton Children’s Heart Institute, affiliated with the UofL School of Medicine.

For delivery, Kayla was induced at 38 weeks.

From there, Avery was taken to the neonatal intensive care unit (NICU) so the team could deliver medicines that would keep her patent ductus arteriosus (PDA), an open passageway between the pulmonary artery and the aorta, open. The ductus arteriosus usually shrinks and closes on its own during the first few days of life in children born with a normal heart. Infants like Avery born with a single ventricle defect experience decreased blood flow from the heart to the lungs or decreased flow of oxygen-rich blood to the body. Keeping the PDA open helps give babies with single ventricle defects time to stabilize before the first surgery to repair their condition. In Avery’s case, that first surgery was the Norwood procedure.

As members of the care team began preparing Avery’s parents to manage her care at home, Avery went into supraventricular tachycardia (SVT), a type of abnormally fast heart rate.

“Looking at her, you couldn’t tell that anything was going on,” Kayla said. “But looking at the screen, her heart rate was in the 200s. We were very quickly moved back to the CICU. And that started a whole new process of medicines to keep her heart rate down. We went home a couple days after that. We were in the hospital for 17 days total when she was first born.”

After Avery was discharged from Norton Children’s Hospital, the Conovers managed their daughter’s condition at home. At around 6 weeks old, Avery had been sleeping in her bassinet next to Kayla’s bed when Kayla awoke to the sound of gasping.

“I got up, dialed 911 and starting doing CPR. We had to do a CPR class before being discharged from the hospital,” Kayla said. “She was blue, she was limp. The police and EMS got there in about three minutes. I was just trying not to pass out because I was not OK. They took her to Norton Women’s & Children’s Hospital to get stabilized. We got there, and they rushed her back and they put us in a room with a chaplain. And then we waited for them to transport her downtown.”

At Norton Children’s Hospital, the Norton Children’s Heart Institute team worked to stabilize Avery as she continued to experience cardiac arrest. Dr. Alsoufi placed Avery on extracorporeal membrane oxygenation (ECMO), using a machine that can provide life-saving therapy for children with heart or lung issues. With ECMO, surgically placed cannulas in a child’s large blood vessels (neck vessels in Avery’s case) allow an artificial pump and lung to provide heart support and oxygen to the body.

The heart team suspected that another form of heart disease, known as Wolff-Parkinson-White (WPW) syndrome, may have caused the cardiac arrest. This rhythm condition causes a rapid heartbeat due to an extra electrical pathway that appears between the heart’s upper and lower chambers. Medication was started to keep Avery’s heart rhythm normal. She remained on ECMO for three days before she was stabilized. Testing confirmed that there were no anatomic issues following the Norwood surgery to explain Avery’s difficulties. The downturn in her condition was determined to be the result of her abnormal rhythm pathways, which would be controlled with medicine. The family spent the Christmas holiday in the hospital, but Avery was able to go home before New Year’s Day.

“She recovered so fast from everything,” Kayla said. “Everyone was just amazed.”

Avery had her second heart surgery, the Glenn procedure, with Dr. Alsoufi, at 6 months old. The Glenn procedure is the second of three surgeries for patients with complex single ventricle defects. Kayla described a very long day of waiting from a morning surgery through evening when she finally got to be with her daughter again, even though Avery still was experiencing low oxygen levels. Avery had bilateral (two) superior vena cava instead of the normal single superior vena cava. Her two veins were small, and she was not getting enough oxygen through shunts placed during the Glenn procedure.

“And I just remember one of the scrub nurses who was in there with her all day, she hugged me and I just cried,” Kayla said.

That evening, Edward S. Kim, M.D., pediatric cardiologist with Norton Children’s Heart Institute, completed an emergency heart catheterization to place a stent in one of Avery’s blood vessels, and that resulted in improved oxygen levels.

Since her second procedure, Avery has been on a schedule of seeing Dr. Kim every six months, then following up with a heart catheterization six months after that. During a catheterization, Christopher L. Johnsrude, M.D., pediatric cardiologist with Norton Children’s Heart Institute, performed a special test called an electrophysiology study, showing that Avery no longer appeared to have evidence of WPW syndrome. Avery still will need another surgery, the Fontan procedure, to finish the three-surgery series to address her complex single ventricle defect.

“We are in a waiting game right now, waiting for her to meet the weight requirements for the surgery,” Kayla said. “I know [with] each appointment, we’re one step closer to the Fontan.”

According to Kayla, the challenges of Avery’s heart condition haves been tough at times, but the only person who doesn’t realize it is Avery herself.

“This experience has been very hard,” Kayla said. “But I see how Avery is so determined. She doesn’t let any of this slow her down; she’s very independent. She’s very hardheaded, and she doesn’t give up. I remember when she was a baby in the [intensive care unit] and a nurse told me, ‘little girls fight hard.’ And she really does. Sometimes I wish she would understand that she needs to take a break when she’s out of breath or having a hard time. But she’s determined; she’s not going to sit around and be sad about it.”