What is supraventricular tachycardia (SVT) in children?

What is supraventricular tachycardia (SVT) in children?

Supraventricular tachycardia refers to fast heartbeats that are due to heart tissue abnormalities somewhere above the lower chambers of the heart. 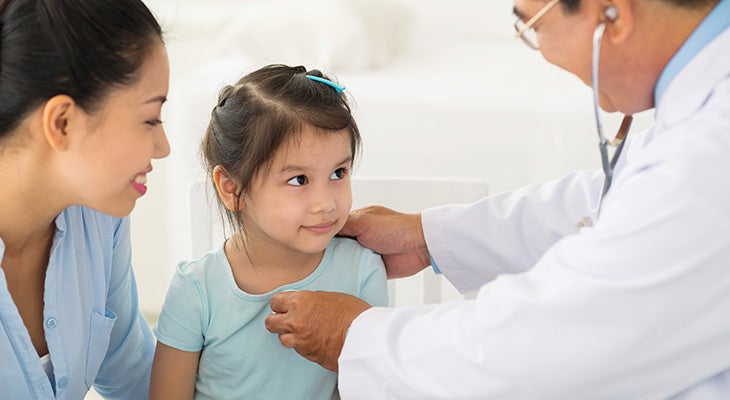 Normal heartbeats can be slow when an individual is resting or asleep, fast when running, excited or upset, and somewhere in between at other times. Even at rest, young children have faster heartbeats than older children, who have faster heartbeats than teenagers or adults. The variability in heart beats is due to the heart’s electrical system, which is responsible for controlling every heartbeat, every time. Abnormally fast heartbeats (tachycardia) occur when the heart beats much faster than it should, unrelated to physical activity or age, and is due to an abnormality somewhere in the heart’s electrical system. Tachycardia or a fast heartbeat that’s due to heart tissue abnormalities somewhere above the ventricles (lower chambers of the heart), is called supraventricular tachycardia (SVT).

Causes of SVT in children and infants

In most children, an electrical short-circuiting causes SVT and is due to a small birth defect. This abnormal tissue is too small to be seen by X-ray or a heart ultrasound (echocardiogram). Whereas many children with SVT have an otherwise normal heart, some children have other heart conditions directly related to the short-circuiting tissue.

Even though the abnormal tissue is usually present since birth, the first episode of SVT may occur at any age, including teenage years and adulthood.

When SVT starts, it usually does so quite suddenly. Many children say the rapid heartbeats felt like “flipping a light switch.” For some children, there is a pretty clear trigger, such as being sick, physical activity, excitement, stress or stimulants like caffeine. For many other children, however, there does not appear to be an obvious trigger or pattern, and SVT spells seem to come on randomly and without reason.

Once SVT starts, the electrical impulses continue to short-circuit, over and over again. Every “turn of the circuit” causes one heartbeat, and so this causes the heart’s rhythm to race rapidly, seemingly out of control. Sometimes, the short-circuiting during SVT stops on its own in just a minute or two, but at other times SVT continues much longer, for several hours and less often, for days.

Certain conditions, such as stress or anxiety, can trigger an episode of SVT. Knowing when a child’s SVT is clearly triggered by physical activity or stress can help guide the cardiologist in selecting medication and time of day to take it. It is important to know that the “cause” of SVT is a birth defect, and these circumstances can trigger or wake up SVT.

Most children having a spell of SVT will have symptoms. Older children and teenagers usually can tell immediately that there is something wrong, and will be able to tell you about it. However, SVT doesn’t cause symptoms in all patients. For example, brief or mild episodes may not cause an infant or small child to complain of a problem or look sick. When SVT is more sustained or intense, however, all children will either complain of problems or appear sick.

Norton Children’s Heart Institute, affiliated with the University of Louisville

The Society of Thoracic Surgeons has ranked our heart program as high as any in Kentucky or Ohio.

Talk to a staff member about quality care without having to travel too far from home.

Some symptoms of an SVT episode:

Heart rates of children with SVT are variable and depend on the child’s age, the type of SVT and other factors such as resting or being active, feeling well or having a fever, and medication. Heart rates in childhood SVT range from 140 beats per minute to more than 350 beats per minute. Because of the overlap in fast heart beats in otherwise normal children and those with SVT, the actual heart rate alone may or may not confirm that the child had an episode of SVT. In these cases, getting an electrocardiogram (EKG) during fast heart beats is the key.

Chris L. Johnsrude, M.D., is an associate professor in the University of Louisville Department of Pediatrics and serves as director of the pediatric arrhythmia service at Norton Children’s Hospital.