Boy regains use of left side of body after brain tumor, stroke

Boy regains use of left side of body after brain tumor, stroke

Anthony Brettnacher is thriving after receiving complex multidisciplinary care for brain tumor and stroke. He’s now walking and regaining movement in the left side of his body. 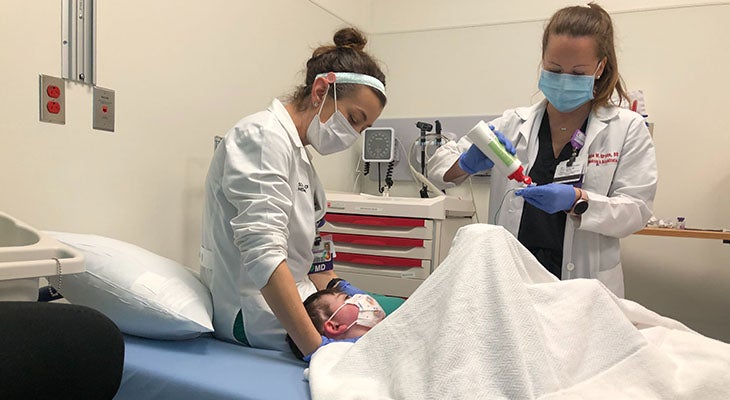 Anthony Brettnacher makes friends wherever he goes, according to his mother, Cierra Brettnacher. At age 2, Anthony was diagnosed with a brain tumor, juvenile pilocytic astrocytoma (JPA), an optic pathway glioma. Since then, he’s had brain surgery, stroke, chemotherapy, radiation, endocrinology care, multiple orthopedic surgeries and extensive physical medicine and rehabilitation to improve function in the left side of his body. But, according to Cierra, despite his health challenges, he is happy and wants to be social.

According to mom Cierra, prior to Anthony’s brain tumor diagnosis, he had some sensory issues and was underweight. Anthony had gone for an MRI scan to see the cause of his issues. Eight hours later, he underwent a craniotomy with William C. Gump, M.D., pediatric neurosurgeon with Norton Children’s Neuroscience Institute, affiliated with the UofL School of Medicine.

During his surgery recovery, Anthony experienced a stroke that left him with very limited use of his left side.

“After his stroke, his left arm stayed tucked up against his chest with his fist clenched. He didn’t want to walk,” Cierra said. “His optic nerves had adjusted to the brain tumor being there, and so when they removed it, his optic nerves didn’t adjust and he lost his vision. So, he kind of lost motivation to walk.”

Anthony also required a feeding tube due to experiencing failure to thrive, as he was not even 18 pounds at 2 years old.

“So we went from having a 2 year old who’s just got a few sensory issues and being a little underweight to now he’s got a brain tumor, he’s having brain surgery, he’s had a stroke. All these things happening and it was scary.”

Once Anthony was stable and released from intensive care at the “Just for Kids” Critical Care Center, he spent four weeks at UofL Health – Frazier Rehabilitation Institute, where he would begin his physical medicine and rehabilitation journey to get him moving with the limited use of his left side of his body. After his first discharge from the rehabilitation facility, he completed 18 months of chemotherapy with Norton Children’s Cancer Institute, affiliated with the UofL School of Medicine.

“He was stable for about two years on chemotherapy,” Cierra said.

However, two days after Christmas 2017, the family received heartbreaking news: The tumor had begun to grow again.

“Seeing that brain tumor come back after all we had been through, that was my lowest moment,” Cierra said. “I just broke down. It has been a journey to come back from that, for both of us.”

Anthony received radiation treatment for his brain cancer recurrence. Since this radiation therapy, he has remained stable, according to Cierra.

Childhood cancer survivors can experience different side effects or conditions after treatment, known as late effects. Due to the size of Anthony’s brain tumor when it was found, it “destroyed” his pituitary gland, according to Cierra. Because of this, Anthony requires extensive endocrinology care, and is treated by Kupper A. Wintergerst, M.D., pediatric endocrinologist with Norton Children’s Endocrinology, affiliated with UofL School of Medicine. Anthony receives hormone replacement therapy, including growth hormone therapy and thyroid replacement. He also receives treatment for diabetes insipidus, a rare condition where the body does not produce enough of the hormone vasopressin which leads to water loss and severe dehydration.

“So that’s actually been one of Anthony’s biggest struggles is his diabetes insipidus because he is just so finicky about his sodium level,” Cierra said. “If his sodium levels get to be 140 or higher, I can actually tell it in his personality. He’s not as happy; he becomes very grumpy. He doesn’t want to be touched, like a completely different kid. And so it’s been a struggle. We have a standing order for bloodwork —  you can’t test sodium at home, like people test blood sugar levels with other types of diabetes. Dr. Wintergerst has been amazing with his care of Anthony.”

“His brain is now rewiring itself from having the brain tumor and stuff,” Cierra said. “A lot of that is just learning how to give him the tools to cope with it.”

Physical medicine and rehabilitation and orthopedic care help with mobility, function and quality of life

Muscles have a certain amount of tone or activity; this tone is controlled by signals from the brain. When the part of the brain that sends these signals is damaged by stroke, then muscles may become tight or stiff and make movement difficult. This is a muscle control disorder called spasticity. About 30% of stroke survivors experience some form of muscle spasticity, with symptoms such as a clenched fist, bent elbow and arm pressed against their chest, a stiff knee and a pointed foot. According to Cierra, Anthony experienced all of these symptoms.

Anthony has required extensive orthopedic and physical medicine and rehabilitation care to improve function and mobility with the left side of his body. He has worked with Catherine P.  Schuster, M.D., pediatric physical medicine and rehabilitation specialist with Norton Children’s Physical Medicine & Rehabilitation, affiliated with the UofL School of Medicine; and Laura K. Jacks, M.D., pediatric orthopedic surgeon with Norton Children’s Orthopedics of Louisville, affiliated with the UofL School of Medicine, to manage his symptoms.

“When we started this process, Anthony was still on a feeding tube. He wasn’t walking. He was completely nonmobile,” Cierra said. “The journey that we have been on with him, we would do Botox with Dr. Schuster or Dr. Jacks, either one. And then about three weeks out from the Botox when it’s really at its peak, we would do at least a week, but usually a two-week inpatient stay at Frazier for really good, hands-on therapy.”

Botox therapy for spasticity care works by blocking the chemical signal between nerves and muscles that makes the muscle contract or tighten. It helps loosen the muscles, easing pain and muscle stiffness.

“Getting those muscles stretched out and not tight is really important for a kid on growth hormone,” Cierra said. “Because if the muscles are too tight, they can’t grow appropriately. But you’re forcing them to grow by giving them growth hormone.”

According to Cierra, they have used time during the COVID-19 pandemic to exclusively focus on Anthony’s orthopedic and rehabilitation care. In 2020, he had two tendon transfer surgeries performed by Dr. Jacks, one on his left arm and one on his left leg. Tendon transfers involve separating a tendon from muscle and reattaching it in a new location. This procedure lets a healthy muscle help a weak or hurt muscle perform more normally.

Anthony would have an inpatient rehabilitation stay and work with the Norton Children’s Physical Medicine & Rehabilitation team to “get in a good place” before each of his surgeries, according to his mother. He would then have another two-week inpatient stay after surgery, to adjust to his new cast and continue rehabilitation therapy.

“We have seen a ton of improvement with him in the last year, between the surgeries and spending the time at Frazier,” Cierra said. “He has seen more improvement in his Braille skills over the past year, because he’s getting one-on-one attention with his Braille teacher. So it was kind of a fun year for us because we were able to do all of these things to help him flourish. And don’t get me wrong, being inpatient anywhere is hard. But each time we go to Frazier, it’s kind of like going home again, because we’ve gotten so attached to Dr. Schuster and all of the staff. Dr. Schuster’s role is the rehab piece of Anthony’s care, but she helps us juggle so many other medical things he has going on. She knows if I say, ‘Hey, something’s off,’ she’ll order a sodium level so that we can check and see what it means. And she coordinates that with Dr. Wintergerst. She has helped us so much.”

The extended inpatient stays and surgeries have yielded positive results, according to Cierra.

“He’s now up and walking. He is squatting, which is huge, because for kids without vision, I think it really complicates the rehab journey even more because you can’t do a lot of typical rehab; going up and down stairs is really scary for him because he cannot see the steps. And then getting him to squat down or bend over to where if he dropped something he could pick it up. That’s a really scary place for him too because he’s less assured of where he is in space,” Cierra said. “And we are to the point now that he will at least [bear weight on his] left foot, he can stretch the elbow out, he can use the left elbow to help him sit up. … I mean, it’s completely different from where we started, a huge difference.”

While Anthony has made lots of progress through his care, he still has hurdles facing his mobility. His care teams discovered a leg-length discrepancy — his left leg is slightly longer than his right, which adds to the issue posed by his stiff left knee. Additionally, his left hip is somewhat displaced, with the ball of the hip slipping out of the socket (acetabulum) joint.

“Drs. Jacks and Schuster are kind of taking that hand in hand,” Cierra said. “It’s kind of a wait and see, I’m hoping we can put off any surgeries until we can better motivate him to walk.”

Cierra calls Anthony “Mr. Social,” because wherever he goes, he’s happy, and he wants to visit with his favorite nurses, doctors and staff.

“He made friends with the janitor who does the floor buffer on the pediatric floor at Frazier,” Cierra said. “You would think that as a blind kid, something noisy like the floor buffer would be absolutely terrifying for him. Well, Anthony would actually want to go sit in the hallway and listen to it because it’s a white noise and he liked it. And that’s how he developed a relationship with Reggie who does the floor buffer; and it’s really the sweetest thing.”

Anthony’s cheerful disposition is infectious for the doctors and nurses that provide his care, too.

“We all love Anthony,” Dr. Wintergerst said. “He reminds me why I went into medicine every single time I see him.”

While her experience with Anthony has felt traumatic at times, seeing his bright personality shine gives Cierra hope.

“And considering everything he’s been through and everything he’s got going against him, he’s just happy,” Cierra said. “And as a parent, that’s all you want. You want your children to be happy. It’s been a roller coaster. We’ve had our ups and we’ve had our downs. But with as far as he has come, I’m just excited to see where he’s going to go. Because at this point, he has no limits. I’m going to see him grow up and mature and that is worth everything.”