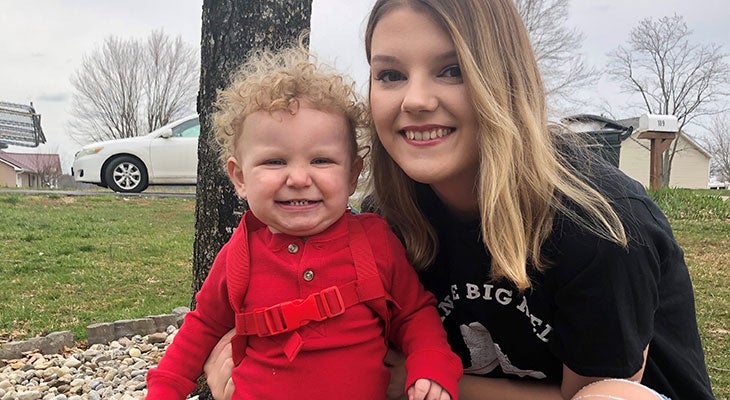 Molly Bostic will soon be dancing in honor of her 18-month-old nephew who has undergone two heart surgeries at Norton Children’s Hospital. His first lifesaving surgery took place when he was just 3 days old.

Molly will dance from 8 p.m. to midnight on March 20, as part of Western Kentucky University’s Dance Big Red, a student-led, virtual event to raise funds for Norton Children’s Heart Institute, affiliated with UofL School of Medicine. Participating students ask for donations through DanceBigRed.com in support of their efforts.

When she needs energy to keep dancing, Molly will find inspiration in her nephew, Johnathan, who was diagnosed shortly after birth with a congenital heart condition called tetralogy of Fallot (TOF) with pulmonary atresia.

TOF is marked by four defects:

Johnathan’s blue skin was the first sign something was wrong when he was born at Twin Lakes Regional Medical Center in Leitchfield, Kentucky. His family lives in Munfordville, Kentucky, 70 miles south of Louisville. According to Johnathan’s mother, Sarah Bostic, she and her husband, Tyler, (Molly’s brother) were anticipating a healthy baby.

When Johnathan was born, a pediatrician recognized quickly that something was wrong with the baby’s heart, and the “Just for Kids” Transport Team immediately flew Johnathan to Norton Children’s Hospital.

According to Molly, the experience was very overwhelming for the family.

“We didn’t know he was unhealthy. We thought he would go home within a day or so,” she said. “He went from being healthy, to not healthy, to being on a ventilator.”

Bahaaldin Alsoufi, M.D., chief of pediatric cardiothoracic surgery at Norton Children’s Heart Institute, performed heart surgeryon Johnathan at just 3 days old. Dr. Alsoufi installed a small tube, or shunt, connecting blood flow from his aorta to the pulmonary artery and his lungs until he grew large enough to have a complete repair. Dr. Alsoufi also augmented the size of Johnathan’s small pulmonary arteries using a patch made from Johnathan’s own tissue.

Sarah didn’t get to hold Johnathan until he was 1 month old.

“When Sarah held him for the first time, there were so many wires, she couldn’t really hold him,” Molly said. “She could just pick him up.”

Johnathan’s next heart surgery took place at Norton Children’s Hospital when he was 5 1/2 months old. This time, Dr. Alsoufi closed the ventricular septal defect, relieving the pulmonary obstruction and placing a pulmonary valve. These procedures allowed blood to reach the lungs more easily, easing the load on the right ventricle so its thickness will lessen over time.

Johnathan is expected to need subsequent surgeries as he grows — likely around age 4 or 5 and then again around age 14 or 15, as he reaches adulthood. From there, he will require close monitoring by a specialist in adult congenital heart disease.

“Dr. Alsoufi was fantastic,” Sarah said. “He came out before and after the surgery to talk to us. He was very thorough and explained everything to us so that we knew all the risks. His nurse gave us hourly updates, and never missed an hour.”

Dancing to give back

Johnathan now has follow-up appointments with a cardiologist at Norton Children’s Medical Group – Elizabethtown, which is closer to the family’s home. Aside from the large scar on his chest, he looks and acts like a healthy 18-month-old now, according to Sarah.

“People look at him and say ‘Really? Not this chunky boy,’” she said.

According to Sarah, they won’t know until he’s older if he will have limitations with physical activity, but they are optimistic.

Molly, a sophomore at Western Kentucky University studying pre-medicine, credits her experience seeing the care that Johnathan received at Norton Children’s Hospital with helping her realize she would like to be a neonatologist.

“Before Johnathan, I had never been there. I never had a need,” she said. “But once you have a reason to be there with your family, and you get a feel for other families and the reasons they are there, you see how much impact there is in that one hospital — just how much good they’re doing, and how many sick kids need them.”

Molly is excited about her first experience with Dance Big Red.

“I’m happy to be able to do it and give back to a hospital that helped save my family,” she said. “I don’t know where we’d be without that little boy.”