Luke Coward is back to work as a firefighter following surgery for adult congenital heart disease (ACHD) and care from the team at Norton Children’s Heart Institute, affiliated with the University of Louisville. 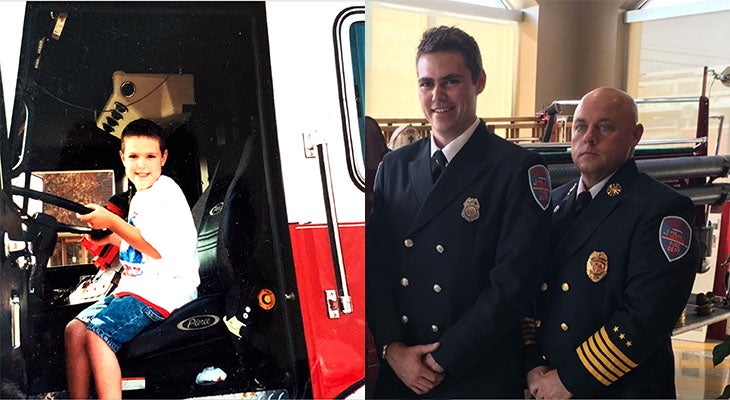 Luke Coward was born with Ebstein anomaly of the tricuspid valve, an extremely rare congenital heart condition that accounts for less than 1% of all congenital heart conditions. From the time he was diagnosed at 18 months old, he never felt limited by the condition. He was an active, healthy, happy child who just happened to see a cardiologist regularly. He felt called to service and became a firefighter with the Jeffersonville Fire Department in Indiana.

“I was an 18-year-old male; you think you’re invincible,” he said. “I felt fine, and I didn’t grasp the severity of what I was dealing with.”

At 20 years old, Luke began having intermittent heart symptoms that recurred for several years. He began experiencing episodes of a fluttering feeling in his chest and sustained, abnormally fast heartbeats — arrhythmias called supraventricular tachycardia (SVT). SVT is caused by abnormal behavior of heart tissue somewhere above the ventricles (which are the lower chambers of the heart). As a firefighter, Luke was used to pushing himself physically –– but these episodes would happen even during mild physical activity. He had gone to emergency departments on two occasions, and had been given IV adenosine, a medicine that stopped the fast heartbeats. He was put on a beta blocker, a medication to manage the irregular heartbeat, and he thought that would be the end of the spells. However, he had another breakthrough SVT episode and was told he should see adult congenital heart disease (ACHD) specialists.

Luke was referred to physicians with Norton Children’s Heart Institute, affiliated with the University of Louisville. A multidisciplinary team of physicians, including Bahaaldin Alsoufi, M.D., chief of pediatric cardiovascular surgery, and Chris L. Johnsrude, M.D., director of the pediatric and adult congenital arrhythmia service at Norton Children’s Hospital, strategized about how best to treat Luke. Ebstein anomaly is a condition marked by complex and interrelated structural and electrical issues. It can show up in very many ways and not be the same in every person affected.

The team decided that surgery would be needed to fix the structural issue. But before that, Luke would need an electrophysiology (EP) study and catheter ablation, scheduled on Valentine’s Day, to address the problems with SVT he was having. During the 10-hour procedure, Dr. Johnsrude created a virtual 3D model of Luke’s heart, which showed that his heart anatomy was very complex, and also that he had multiple types of SVT. Dr. Johnsrude then went through each location causing SVT in Luke’s heart, and using specialized catheters, applied a short burst of heat or cold to the spots to fix the abnormal rhythms. Although he did well during the procedure, Luke had an SVT episode after the procedure, probably related to the complex structure of his heart and the many locations where the abnormal rhythm originated.

“Because we knew he had more SVT after the ablation, Dr. Alsoufi and I spent a lot of time reviewing his anatomy and our findings, and planned out how a surgeon could address the remaining rhythm issues at the time of surgery,” Dr. Johnsrude said.

Adults like Luke living with ACHD make up a rapidly growing population due to successes in congenital heart disease treatment in childhood. Many of these adults will need complex valvular repairs or replacements at some point in their lifetimes. Due to the complexity of these surgeries, receiving care from a specialized team that is trained to treat congenital heart conditions in children and adults makes the difference in outcomes for these patients. Several studies have shown that the risks of ACHD surgery are up to three times lower for patients who have their surgery performed by a specialized team at a children’s hospital.
Norton Children’s Hospital provides comprehensive care to all children and adults with congenital heart disease.

Call for an appointment.

The team decided that the cone procedure would be the best surgical repair option to address Luke’s abnormal tricuspid valve, and that additional surgical ablation of remaining lesions as determined by the EP study would help eliminate any additional source of cardiac arrhythmia. The cone procedure was developed in the 1990s, and has gradually gained popularity, especially in the past decade, to become the surgical repair technique of choice.

“In this complex surgery, the tissue from the patient’s own tricuspid valve is extensively freed from its abnormal attachments to the right ventricle wall and mobilized to allow the creation of a cone-shaped valve that best simulates normal tricuspid valve function,” Dr. Alsoufi said. “This procedure has shown to be associated with the best quality of life and freedom from symptoms or reintervention, and is also especially important in children in whom we anticipate the growth of the valve, since we are using the patient’s own tissue.”

Luke had the cone procedure on March 7, 2019. The firehouse’s battalion chief, several members of crews and the union president sat with Luke’s wife, Lauren, a Norton Children’s Hospital nurse, during the whole experience.

“During that time, I was doing my cardiac rehab, walking and exercising, and doing all recommended exercises. There were other firemen out longer for shoulder surgery,” Luke said. “I was impressed by how quickly I healed.”

While he didn’t think much of his condition as a child, he’s come to respect and understand it as an adult.

“I’m glad of the reassurance my care has given me. I never was too worried about my condition, but when I had issues I was constantly worried,” Luke said. “After surgery and everything the doctors recommended, I feel 100% about my health and abilities. It’s so nice to have the heart team behind me. I feel so much better than I ever did before. I didn’t know I could feel this good.”

Luke and his wife are expecting a baby in March 2020 –– a full year after his surgery. He and Lauren consulted Norton Children’s Maternal-Fetal Medicine about risks of having a child with congenital heart disease.

“Despite my congenital heart disease, the current medical evidence about Ebstein anomaly doesn’t suggest that the baby should be at much higher risk to have a similar heart condition,” Luke said. “That was some good news to hear.”