Apphia Rosenthal’s family went from the ophthalmologist to the emergency room, receiving a brain tumor diagnosis - craniopharyngioma - the same day. 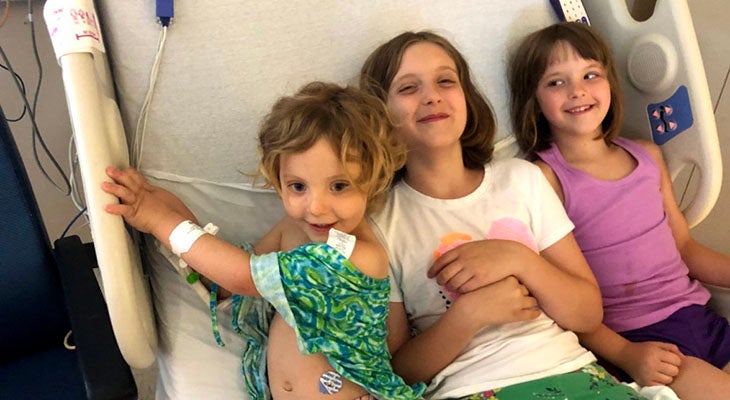 Three-year-old Apphia Rosenthal started a regular day last summer eating eggs and chatting with her parents. She was excited about what color glasses she would choose if she needed them (she was thinking something in pink). What her parents weren’t expecting was for Apphia to go from the ophthalmologist, to then have a magnetic resonance imaging (MRI) scan and receive a diagnosis of a brain tumor that same day.

Josh and Melanie Rosenthal, Apphia’s parents, had noticed that she was having trouble focusing and looking at things, as well as being a little wobbly on her feet. They made an appointment to check Apphia’s vision. At the ophthalmologist appointment, they learned that something was wrong with her vision.

The ophthalmologist referred Apphia to get a brain MRI scan and indicated that if her parents noticed any changes to go straight to the hospital. When they were leaving the eye doctor, Apphia had an issue with her speech. Her parents took her directly to the emergency department at Norton Children’s Hospital.

Her exam there indicated she had severe vision loss, and the ER team sent her straight for the brain MRI. She was admitted, and the Norton Children’s neuroscience specialists were consulted. Another eye specialist determined her left eye was “NLP” –– no light perception, blind. With her right eye, she could only “count fingers.”

As a craniopharyngioma grows, it impacts the optic nerve, pituitary gland and hypothalamus. This means it can damage vision, the hormone systems and balance in many of body’s fundamental functions; the hypothalamus controls body temperature, hunger, thirst, fatigue, sleep and circadian rhythms. For example, a child with a hypothalamus injury may not be able to control hunger and will compulsively eat or not eat at all. Injuries to the optic nerve, pituitary gland and hypothalamus cause lifelong concerns. Treating craniopharyngioma calls for protecting all of these important functions.

Choosing to stay at Norton Children’s

“We were strongly considering, basically making plans for, going to a hospital outside of Kentucky,” Josh Rosenthal said. “That wasn’t so much a reflection on Norton Children’s; it just never occurred to us that Louisville would boast a world-class pediatric neurology center.”

At the time of Apphia’s hospitalization, Josh and Melanie served as executives for a physician and hospital evaluation ranking service used by major health plans, elite academic research centers, and well-known hospital and physician systems across the country. Both had served as expert advisers to government health care programs and nonprofit clinical quality organizations.

“In other words, we regularly worked with some of the very best health care organizations across the county,” Josh said. “After decades of working with thousands of physicians, ranging from run-of-the-mill to nationally renowned, it was immediately clear to us that Drs. Moriarty, Wintergerst and Spalding and the Norton Children’s neuro team were special.”

The Norton Children’s neurosurgery team partners with many different care specialties. As part of our neurosciences multidisciplinary team, neurosurgeons offer surgical care for all types of neurological disorders affecting the nervous system, spine and skull, including traumatic injury, hydrocephalus, brain tumors and epilepsy.

Sometimes not all of the tumor can be removed through surgery because of the risk of damaging the optic nerve, hypothalamus and carotid artery. Surgeons then remove as much of the tumor as possible to relieve pressure, and follow with radiation therapy to treat the tumor remnants.

She had no injury to her pituitary or hypothalamus. As for the optic nerves, her vision improved immediately after surgery, and over the following months, her sight continued to recover.

A year after surgery, Apphia is an active, happy child. She has an adventurous streak, learning how to do parkour and gymnastics at classes and playing with her siblings. She loves swimming and playing with dolls and Legos.