Born with a seldom-seen combination of congenital heart conditions, Cayden Horton is a thriving child after ‘roller coaster’ heart treatment, including a rare combination of surgeries. 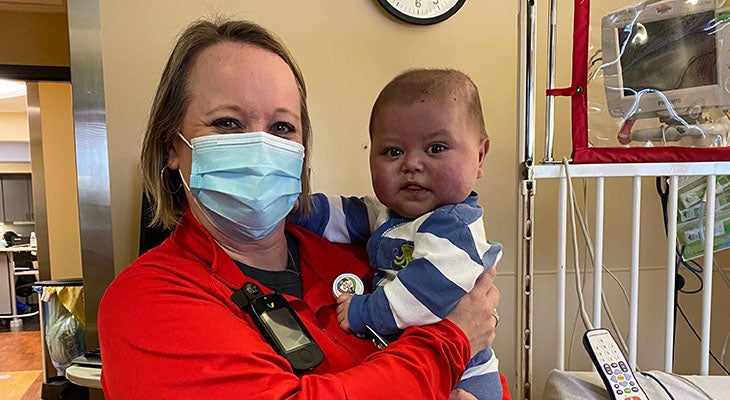 Alyssa Claycomb considers her first two children “healthy as horses.” So during her pregnancy with her youngest child, Cayden Horton, the thought of congenital heart disease never entered her mind, let alone a very rare and usually fatal complex heart abnormality. The anatomy scan during her 22-week OB/GYN visit would change everything.

“At my 22-week appointment, we did the anatomy scan, and after, my OB/GYN came in and said, ‘I hate to tell you this, but there is something going on with his heart,’” Alyssa said. “You just never think something like that is going to happen to you or your child.”

Her OB/GYN sent her to Norton Children’s Maternal-Fetal Medicine the next morning for another ultrasound with a maternal-fetal medicine specialist. Alyssa then met with Lucinda T.  Wright, M.D., pediatric cardiologist with the fetal cardiology team of Norton Children’s Heart Institute, affiliated with UofL School of Medicine, for her first fetal echocardiogram.

“The biggest series in the literature regarding Cayden’s rare disease showed that of 21 patients, only two patients were alive by 3 months of age,” Dr. Alsoufi said. “It is a very complex issue and can be associated with fetal demise [stillbirth], and the children will need emergency, very complex care which also can be associated with bad outcomes.”

With HLHS, the left ventricle of the heart is usually underdeveloped. But Cayden’s heart also showed mitral valve dysplasia syndrome, a very rare form of left-side congenital heart disease. In this condition, a child’s heart has a mitral valve which is too small. Instead of acting like a door that just won’t open, the mitral valve acts like a swinging door, allowing a small amount of blood to go forward, and then allows blood to leak backward with each heartbeat. The pressure of this backflow caused the left side of Cayden’s heart to be enlarged, instead of small and underdeveloped as it usually would with HLHS.

“Dr. Wright had told us to prepare for him to not make it to birth,” Alyssa said. “She let us know that as he grew, the retrograde flow would continue to get worse and worse, and it would likely cause his heart to stop beating. She has awesome bedside manner, and it’s really hard to have good bedside manner when you’re delivering bad news like that.”

“So, every week, we’d come in, and Dr. Holland would say, ‘The odds are against you, but he’s jumping through the hurdles that he has to jump through,’” Alyssa said. “From one appointment to the next, it’s obviously very hard to hear that, especially so far along in your pregnancy. It’s difficult because there’s nothing that you can do but hope that your baby still moves the following day.”

Toward the end of her pregnancy, Alyssa developed polyhydramnios, which is excessive amniotic fluid, putting her at a greater risk for preterm labor. To make sure Cayden would be as healthy as possible at birth, the team placed Alyssa on a high-protein diet to help Cayden gain weight. Due to Cayden’s heart condition, the team scheduled Alyssa for a cesarean section (C-section) to ensure the whole team needed for Cayden’s care would be ready immediately upon his birth.

A very clear plan was made for Cayden’s delivery. The care was coordinated between the obstetricians, neonatologists, cardiologists and surgeons to have him undergo an emergency intervention within half an hour of delivery. Cayden was delivered by C-section on April 30, 2020, weighing 7 pounds, 2 ounces, at 37 weeks and 3 days. According to Alyssa, her C-section went smoothly, and the plan the heart care team prepared Alyssa for played out. Immediately after birth, Cayden was cleaned up and taken to the catheterization lab for his first heart procedure with Edward S. Kim, M.D., pediatric interventional cardiologist with Norton Children’s Heart Institute.

“They cleaned him off and got him hooked up to monitors and then they wrapped him up,” Alyssa said. “He was breathing room air at first. They held him up to my face, and we took pictures and then my fiancé got to hold him. And then it wasn’t even five minutes went by and they took him to the cath lab to use a balloon to create an atrial septal defect, which was going to give the team some time before they had to do his first surgery.”

Cayden would have his first open heart surgery at 3 days old. Due to Cayden’s heart anatomy, Dr. Alsoufi consulted his team and made a plan to perform several procedures during that first surgery.

“Surgeons have tried different approaches that have been largely unsuccessful,” Dr. Alsoufi said. “The thought with this combined approach that we performed on Cayden is to address all the issues in his heart at once to increase the chance of survival.”

Cayden’s first surgery included multiple procedures. They included the Norwood procedure, a common procedure used in treating HLHS; the Batista procedure, a surgical technique where a portion of Cayden’s very large left ventricle was removed; and a mitral valve repair, to fix his leaky mitral valve.

“This combination seems to have addressed all aspects of this fatal combination of heart disease that he has,” Dr. Alsoufi said. “This combination of Norwood and Batista has been attempted in two patients in the literature that we’re aware of, although these patients were slightly different and seemed less sick than Cayden was. He is one of the very few patients to receive this type of combination of surgery. And he’s probably the sickest to receive it.”

Cayden would stay in the Jennifer Lawrence Cardiac Intensive Care Unit (CICU) for three months as he grew and recovered from the surgery. Alyssa remembers this time as being as a “very up and down roller coaster ride,” including Cayden being placed on extracorporeal membranous oxygenation (ECMO) at one point.

ECMO is a machine that can provide lifesaving therapy for children with lung and heart failure. Cayden acutely developed very low oxygen levels. The team initially suspected that a shunt placed in Cayden’s heart during the surgery had potentially closed with a blood clot. Deanna R. Todd Tzanetos, M.D., pediatric critical care specialist with Norton Children’s Critical Care, affiliated with the UofL School of Medicine, and the team successfully placed Cayden on ECMO. The next day, the cardiac catheterization team confirmed that the shunt was open. Cayden remained on ECMO for a few days, then spent several more days in the CICU learning how to breathe on his own and working on feeding and nutrition. As part of the CICU discharge planning process, Alyssa and her fiancé spent days receiving education on how to manage Cayden’s complex needs at home. They were taught how to give his medicines, how to monitor his oxygen levels, how to use his feeding tube and how to give CPR should Cayden’s heart stop beating at home. They were then given the opportunity to practice caring for Cayden in the CICU, with the support of the nursing staff close by, prior to his discharge home.

Catheterization, hospitalization, then the Glenn procedure

In preparation for Cayden’s next heart surgery, the Glenn procedure, he needed a catheterization to make sure the pressure in his lungs was adequate to undergo the surgery. The family went in for the procedure on Sept. 23, 2020. Cayden was admitted to the hospital after his catheterization and underwent the Glenn shunt procedure the following week.

Now at 9 months old, Cayden attends speech therapy, lots of physical therapy and has a gastrostomy tube (G-tube), which is how he gets all of his food.

Alyssa said despite all he’s been though, he’s a very happy child.

“We talk all the time about how crazy it is that he’s here, when we never expected him to take a breath,” Alyssa said. “I feel like it gives us a different outlook on life. This heart team worked miracles for our baby, along with God and everyone who prayed for us along this journey.”

According to Alyssa, it was a tough road for her and her fiancé, Victor Horton, managing their careers, schedules and care for their other children all while spending long days and nights at the hospital with Cayden. They delayed their wedding twice due to the COVID-19 pandemic and Cayden’s second surgery. While the couple has made lots of sacrifices in the past 16 months, according to Alyssa it has reaffirmed their partnership.

“I heard somewhere that couples with medically fragile children are 80% more likely to separate eventually,” Alyssa said. “But we’re over a year into this since the diagnosis and going strong. I really used to ask the question ‘Why us?’ constantly after our diagnosis, but now I know it’s because God knew we could handle it and that we’d get through it and come out stronger on the other end.”