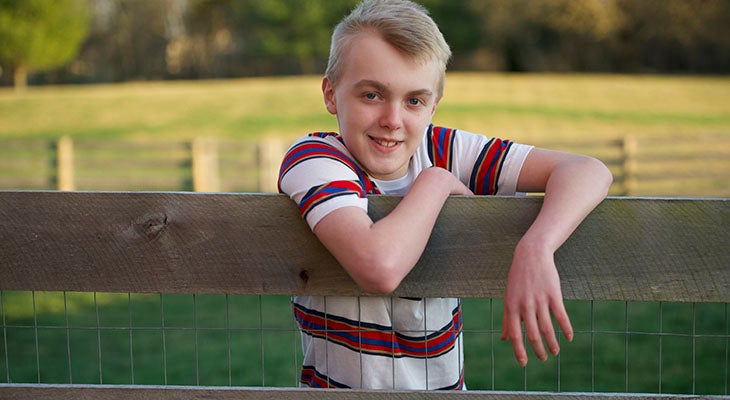 Erica Kelley was living in Arizona in 2007 when her son, Samuel, was born. Sam received his newborn screening before leaving the hospital, as is required in most states in the U.S. The screening indicated that Sam needed further testing, which showed that Sam has cystic fibrosis (CF). He was 15 days old when he when he was diagnosed.

“We were just so happy to have a baby,” Erica said. “And we had no family history of cystic fibrosis; I had no idea what it was.”

According to Erica, from the very beginning the family approached Sam’s CF diagnosis seriously, while maintaining a sense of composure.

“The approach that my husband and I have taken in his care has pretty much been to address the problem at hand, and to be aware of things that could come up but not really worry about it too much,” Erica said. “In Arizona, one of the big issues that he always had was gaining weight. He was very, very close to getting a feeding tube. But we managed to avoid that.”

The family moved to Louisville in 2012 due to a work transfer. According to Erica, transferring Sam’s CF care to Norton Children’s Pulmonology, affiliated with the UofL School of Medicine, was seamless: It even included a familiar face. Adrian R. O’Hagan, M.D., now a pediatric pulmonologist with Norton Children’s Pulmonology, was the doctor who diagnosed Sam with CF in Arizona.

“It looked like we followed him here, although we didn’t,” Erica said. “But it was fun to see a familiar face at clinic.”

According to Erica, the family has a great experience with all of the pediatric pulmonologists with the practice.

“They all take a similar approach, but it’s also really different,” Erica said. “Some of them are really aggressive in their treatments, and some of them are less aggressive. It’s good to have such well-rounded care.”

When people with CF catch viruses such as colds, the flu and respiratory syncytial virus (RSV), they may get sicker because of CF. The gene that causes CF impacts how salt moves in and out of the cells in the lungs, causing thick, sticky mucus. Viruses can stick and grow well in the mucus in the lungs of a person with CF. When white blood cells in the body attack the germs, it can cause inflammation in the lungs, causing the airways to swell. It becomes a cycle, and a condition that may be mild in some children can cause weeklong hospital stays.

“He has had several hospitalizations over the years,” Erica said. “With CF, you don’t just go to the hospital for one night. In our experience, it’s usually about a week for him to be able to recover from something like pneumonia or RSV. And because of his history, he can’t leave the room much except to get tests. The pulmonologists and nurses try their best to make him comfortable. Last time he had to be hospitalized, they brought him a gaming cart, which was fun.”

“It’s a really good opportunity for Sam to kind of have some face time with the pulmonologist, so that’s kind of an added bonus of a trial,” Erica said.

In 2019, Trikafta (elexacaftor/ivacaftor/tezacaftor) was approved by the U.S. Food and Drug Administration for use in children with cystic fibrosis for ages 12 and older. Trikafta is a combination of three drugs that target the abnormal cystic fibrosis transmembrane conductance regulator (CFTR) gene, the most common cystic fibrosis gene mutation. It helps the protein made by the CFTR gene mutation function more effectively. To qualify for the medicine, a person must have at least one F508del mutation in the CFTR gene. This represents at least 90% of the cystic fibrosis patient population.

“He’s been on Trikafta for a little over a year now, and it’s really been a game changer for us and for many other people with CF,” Erica said. “He’s been doing great. We’ve been able to reduce some of the other medications that he’s on. His lung function has gone up; his weight has gone up. And those things are correlated: the higher the weight, the higher the lung function. And so we always try to keep them at a healthy weight.”

While newer medicine has helped Sam experience improvements, he’d developed other complications due to CF, according to Erika. In summer 2020, Sam was diagnosed with cystic fibrosis-related diabetes (CFRD). Twenty percent of adolescents with CF experience CFRD, and about half of adults with CF experience CFRD. Sam’s CFRD care is managed by Heather M. Rush, APRN, CDCES, a pediatric endocrinology provider and certified diabetes care and education specialist with Norton Children’s Endocrinology, affiliated with the UofL School of Medicine. The pediatric endocrinologists with Norton Children’s Endocrinology and the Wendy Novak Diabetes Center work alongside Norton Children’s pulmonologists to provide individualized treatment plans to help children with CF manage their CFRD.

As Sam is now a teenager, they are entering a new phase with his care, according to Erica.

“He of course wants more autonomy in his treatment. And I am the nagging mom: ‘Did you take your meds? Did you take your shot? Did you do this?’ Nine times out of 10, I know the answer is ‘Yes.’ But we still have to ask,” Erica said. “But it’s good for him to navigate this on his own with support from my husband and I. Whenever we go to clinic now and they’ll ask him questions, I want him to try to answer those questions as much as he can. Because he needs to know that. And of course, I’m there to help him with the answers. But I encourage him to take ownership of that as much as he can to build that autonomy.”

According to Erica, for Sam and other children with CF, she has nothing but hope for the future.

“I never in my wildest dreams imagined that Trikafta would be a thing,” Erica said “And here it is. It’s part of our daily life. I’m hopeful for CF medication and treatment advances. Because there’s nowhere to go but up. I think it’s easy to get dragged down in daily life with CF, because there is a lot to do. There’s a lot of treatments; there’s a lot of medications to take. And it’s easy to get kind of weighed down with all of that responsibility. But, you see older people with CF living great lives with their families and accomplishing their life’s goals. And I want that for Sam and for his peers.”