When babies need care before birth

When babies need care before birth 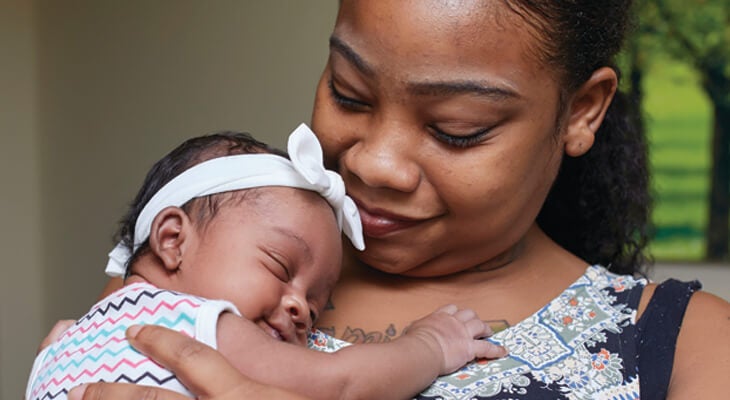 With a baby on the way, Ni’Eshia Andrews and her family were overjoyed. The family planned to welcome a baby girl, joining her big brother in summer 2017. Everything was going as planned until they hit a bump in the road.

During a 28-week fetal ultrasound, Andrews’ obstetrician discovered she had too much amniotic fluid volume and the baby was showing abnormal kidney function. This discovery led to a chain of events that would eventually land Andrews and her unborn baby in the hospital for a rare and risky intrauterine blood transfusion.

Andrews was reluctant to undergo percutaneous umbilical blood sampling, which involves taking a blood sample from the umbilical cord. She agreed to amniocentesis, a less risky procedure that takes a sample of the amniotic fluid. That test indicated that the baby was anemic, according to Mureena A. Turnquest Wells, M.D., maternal-fetal medicine specialist with Norton Children’s Maternal-Fetal Medicine.

Facing the choices ahead

Fetal anemia occurs when there are not enough red blood cells or there is an abnormality with the blood cells. The blood cells play a vital role in fetal development because they carry oxygen to cells and organs. Anemia can lead to many complications in the fetus, including heart failure and death.

Andrews, 28, had a normal pregnancy with her first child and was overwhelmed with concern when she was faced with the choices ahead of her.

Expert care for mom and baby

The team of Norton Children’s maternal-fetal medicine providers draws from years of experience in diagnosing and caring for women during pregnancy. Our specialists have a network of referral centers across the region, along with two Louisville locations, to provide care without patients having to make a long drive. Patients must have a referral from a physician.
Call (502) 629-7181.

The team of Norton Children’s maternal-fetal medicine providers draws from years of experience in diagnosing and caring for women during pregnancy. Our specialists have a network of referral centers across the region, along with two Louisville locations, to provide care without patients having to make a long drive. Patients must have a referral from a physician. Learn more at NortonChildrens.com or call (502) 629-7181.

“It was during a doctor’s appointment that I was told I needed to be admitted to the hospital immediately so they could monitor the baby. From there, I was given the option of having the blood transfusion or not, and Dr. Turnquest Wells explained the risks,” Andrews said. “I was scared, but the doctors and nurses gave me time to think it over and to answer my questions.”

Andrews was faced with the choice of having the procedure, which carries about a 1 percent risk of fetal loss, versus not having it, which could lead to the baby developing congestive heart failure, hydrops fetalis (severe swelling with fluid), premature birth, the baby being born anemic and needing a transfusion immediately following delivery, or death.

At 30 weeks’ gestation, Andrews and her baby underwent the intrauterine blood transfusion at Norton Hospital. Performed with guidance from an ultrasound, Dr. Turnquest Wells and colleague Vance Cuthrell, M.D., injected compatible red blood cells through the umbilical vein into the baby.

According to Dr. Turnquest Wells, the transfusion is the best medical option to prevent further complications in a situation such as fetal anemia. Once a transfusion is complete, the mother and baby have to be monitored frequently until delivery.

A ‘healthy and happy baby girl’

Andrews continued to see the maternal-fetal medicine specialist multiple times per week until her delivery at 37 weeks. On Aug. 28, Rose Chanel was born weighing 6 pounds, 10 ounces. Other than some fast and labored breathing, the baby girl was healthy and was not anemic at delivery. She went home with mom and big brother, Kerion, just four days later.

Although there are several potential causes for fetal anemia, most cases occur when the baby has a difference in blood antigens or proteins from the mother. The cause of Rose’s fetal anemia was unknown, but her mother is relieved it was discovered and treated.

“Our family is very thankful to have a healthy and happy baby girl,” Andrews said.

Maternal-fetal medicine physicians specialize in high-risk pregnancies like Andrews’, as well as women carrying multiples or who have certain health conditions. They partner with obstetricians to care for women with conditions as common as high blood pressure or diabetes to more serious issues that require advanced monitoring.