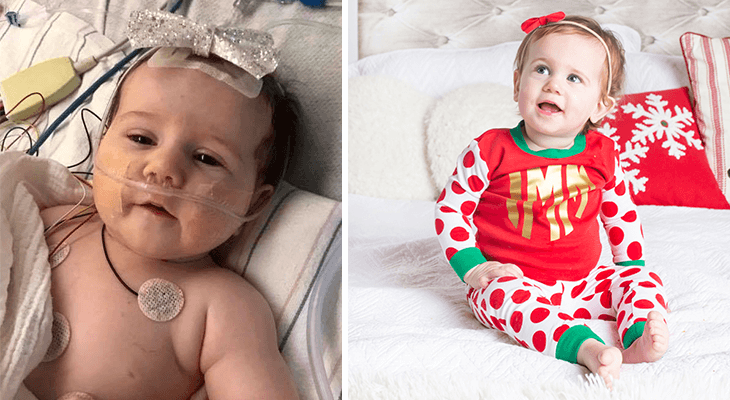 Alex McCoy shares her story about RSV in babies …

This time last year, my husband and I were sitting in the Norton Children’s Hospital ”Just for Kids” Critical Care Center — decorated for Christmas — praying for our daughter’s life.

Isla Mae was only 7 weeks old and relying on a ventilator to breathe. She had been diagnosed with respiratory syncytial virus (RSV) less than 24 hours before, and we had no idea that this “cold” would nearly take our precious girl’s life.

We started in our pediatrician’s office Monday morning and were sent home with an antibiotic for an ear infection. But her fever continued to rise, and her breathing became labored. We took her to an emergency department. She was diagnosed with RSV, but we were able to go home since she could still nurse.

The sickest person in the ER

She continued to get worse, so we took her to Norton Children’s Hospital at 4 a.m. As soon as the respiratory therapist saw her, he grabbed her from my arms and ran. We quickly followed and watched as a hurried team of medical professionals hooked her up to machines and placed IVs. It was like watching a movie — everything happened so fast and we had no clue what was going on.

We were told that Isla Mae was the sickest person in the ER. At that point in my life (not including what followed over the next few days), that was the worst thing I had ever heard.

After hours of watching our frail baby get worse, they moved us upstairs to a hospital room for further observation. I had no clue how serious things were about to become. Another hour passed, and she got worse. They finally told us that they would have to put her on a ventilator. I fell to the floor sobbing. In my mind, someone on a breathing machine was basically dead. The worst hit me when I blatantly asked if she could die and was simply told, “Yes.” I had only been this baby’s mother for seven short weeks; I could not lose her.

After five days, breathing on her own again

The doctors moved quickly and reluctantly let me stay by her side as they put a breathing tube into her mouth. We were moved to the critical care unit, where Isla Mae was under 24-hour watch by a very caring staff of Norton Children’s Hospital nurses. I was lucky to have a friend who worked in this unit and was able to explain to me how the next few days would go.

Each day she got worse. We were told that days four to six of RSV were the worst, but after that, she should improve. We cried. We prayed. We reached out to friends, family and even social media for prayers and positive energy. I would have done anything to take the pain from my daughter, anything to keep her alive.

By the grace of God and the talented hands of very capable doctors and nurses, our Isla Mae began to improve. After being on the ventilator for five days, we were told that she was ready to start breathing on her own again. And just like that, as quickly as she had gotten sick, she got better.

A week after hearing the worst news of my life, I heard the best. We were able to take our precious girl home. Her big brother was finally going to be able to get his sister back. We finally had our family back together.

A warning: Don’t kiss the babies this holiday season

What essentially is a common cold for adults almost killed my daughter. I’m far from the only one who has experienced RSV, but my hope is that Isla Mae’s story will help others avoid going through the same thing.

We don’t know how our daughter contracted RSV, but there are ways to prevent it. Things as simple as washing your hands frequently, keeping your new baby at home and not allowing anyone with even the slightest sniffle be near your small baby could save lives. Some people may deem you as “overprotective,” but the harsh reality is that letting someone touch your baby who just has a “slight cough, I’m not sick,” could kill your baby.

There is not enough education on RSV. I never knew that a baby’s head bobbing back and forth meant they were struggling to breathe. I wouldn’t have known to check for throat and stomach retractions to see if breathing was restricted. I had no clue that this illness could put a tiny baby on a respirator and nearly take her life.

People think “that won’t happen to me.” That’s what I thought, but it very easily can happen. I beg you, wash your hands and don’t kiss the babies. It’s not just a hashtag, it’s a lifesaver.

Not just a cold

RSV is a common respiratory virus that usually causes mild cold-like symptoms. Most people recover in a week or two, but the illness can be fatal for infants, especially those born premature. In fact, RSV is the most common cause of pneumonia in children younger than 1 year in the United States and leads to thousands of hospitalizations each year.

“Babies can get RSV any time of year, but it’s most common from November to April,” said William L. Weber, M.D., pediatrician with Norton Children’s Medical Group – Fern Creek. “In fact, we’re seeing cases in our office.”

Dr. Weber said there are steps you can take to help prevent the spread of RSV: