Natalie Jacobs, MSN, R.N., NPD-BC thought she might have lost her pregnancy. Instead a 105-day stay in the NICU followed the delivery of her daughter at 25 weeks. 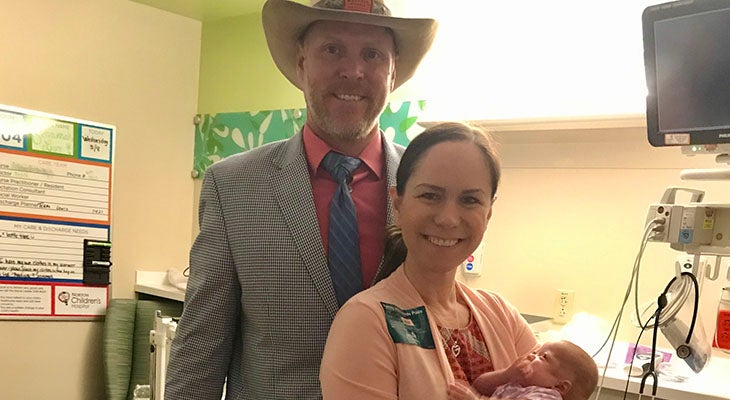 Emergency birth leads to quick action from neonatologist and team

Natalie’s pregnancy to that point had been without complications. During her 10-week ultrasound with Kristina McCormick, M.D., OB/GYN with Advocates for Women’s Health, a Part of Norton Women’s Care, she learned that she may need a cesarean section (C-section) to deliver. The ultrasound showed that uterine fibroids were sharing space with the baby, with one fibroid the size of a softball placed directly over the birth canal.

At Norton Women’s & Children’s Hospital, the care team administered a magnesium IV drip to try to delay or stop Natalie’s labor. But those efforts weren’t working, and Savannah was born at 8:57 p.m. that evening, weighing 1 pound, 7 ounces. Natalie had a friend with her for support, but her fiancé, Joshua, was out of state for work. Kathryn Kersting, M.D., OB/GYN with Advocates for Women’s Health, was on call that night and helped Natalie navigate the emergency delivery.

“Dr. Kersting said, ‘Let’s FaceTime him,’” Natalie said. “So he was able to see her being born. She was a great coach, positive and a great communicator. And she had hope, which is exactly what I needed.”

Terry Cohen, M.D., neonatologist with Norton Children’s Neonatology, affiliated with the UofL School of Medicine, placed a breathing tube in Savannah within 60 seconds of her being born, according to Natalie.

“He was able to get her hooked up to the ventilator and confirm that her lungs were able to expand on the ventilator. So that gave me a lot of hope and relief,” Natalie said. “He gave me all of the information about what the future could look like for a baby born at 25 weeks. I know that it was his skill and expertise in the initial minute of her life that saved her life and brought her great outcomes.”

From there, Natalie said that Savannah’s NICU stay was a “roller coaster.” Savannah was constantly monitored and remained on a ventilator for respiratory support. Physicians evaluated Savannah for a number of conditions, including potential heart conditions, such as patent ductus arteriosus (PDA).

“Some days were uneventful, and we were really grateful for those,” Natalie said. “And some days, we’d get calls at night after going home, saying ‘We had to bag her because she had an apnea bradycardia event.’ Those were really scary for us.”

Savannah was experiencing severe gastroesophageal reflux. Reflux, as it is often called, causes the contents of the stomach to go back up into the esophagus. While spitting up can be a common occurrence for babies, reflux for premature babies can cause apnea (a period where a person stops breathing) or bradycardia (when the pulse becomes slow).

Mukul R. Shah, M.D., neonatologist with Norton Children’s Neonatology, made the call to transfer Savannah to Norton Children’s Hospital for evaluation for the reflux. Savannah was evaluated by surgeons with Norton Children’s Surgery, affiliated with UofL School of Medicine. Savannah ended up having surgery, a Nissen fundoplication with gastrostomy tube (G-tube), for the severe reflux. In a Nissen fundoplication, the valve mechanism at the bottom of the esophagus is corrected, helping to prevent food and acid from flowing upward. A G-tube is placed in the stomach to allow a child to feed after surgery.

Surprise episode lands Savannah back in the hospital

“After she got the surgery, she was doing a lot better,” Natalie said.

Savannah was discharged from Norton Children’s Hospital a week after her surgery and confirmation that she was able to eat by mouth.

A month after going home for the first time, Savannah had a relapse of reflux.

“I found her blue in her bassinet,” Natalie said. “She had refluxed the formula that I had given her an hour and a half earlier.”

They went back to Norton Children’s Hospital. According to Natalie, during that admission, the medical team, as well as John T. Stutts, M.D., gastroenterologist with Norton Children’s Gastroenterology, affiliated with the UofL School of Medicine, decided that Savannah could tolerate only very small volumes of feedings, and her overnight feedings needed to be via G-tube.

“So it took some trial and error, but soon after those episodes of apnea and bradycardia resolved and she went home and she did fine. We fed her through the G-tube at night from June through October 2019,” Natalie said. “In December 2019, we removed the G-tube, and she’s been doing great ever since.”

With a proven team of accomplished neonatal specialists, our two Norton Children’s neonatal intensive care units (NICUs) are dedicated to caring for babies born prematurely or in need of advanced care or surgery.

Natalie said her training in health care likely made her more anxious during Savannah’s care.

“There was really no amount of experience as a nurse that really prepared me for this. I never thought if I had a baby that she would be born at 25 weeks,” Natalie said. “It meant everything to me knowing that I had this amazing team of OB nurses and doctors. And then the neonatology nurses and doctors and respiratory therapists who were there waiting for Savannah to be born and to take over her care. Everything was very controlled and very calm. And it felt I felt like I was safe and I was in the best hands possible. And the care they gave to her helped her have the best possible outcome for her life.”

Despite the challenges she faced, Savannah is a happy, healthy child, meeting all of her developmental milestones. She will follow up with pediatric cardiology when she turns 3 years old for a small patent foramen ovale (PFO). Natalie says that everyone who meets Savannah just loves her bright, happy personality.

“She makes people smile and laugh. She likes to dance and just be silly and run around. She attends a gymnastic class that she loves,” Natalie said. “She’s truly such a joy.”