So moved, Felicia Gross wanted to give back 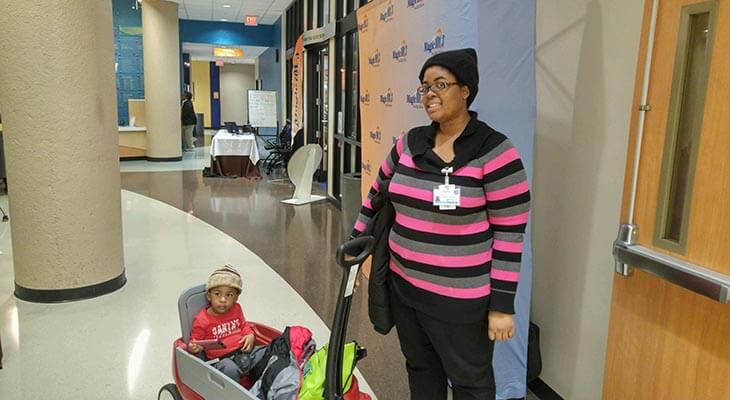 Felicia Gross didn’t set out to work for Norton Healthcare. She already had a career as a chef and was working hard to take care of her family. Little did she know that a life-or-death experience would change that path and provide an opportunity to help others during their toughest moments.

When Gross was pregnant with her son, Isaiah, what should have been a happy time became filled with anxiety. She started having complications and, in August 2015, Isaiah made a hectic entrance into the world at Norton Women’s & Children’s Hospital. He was nearly three months early and about the size of a grapefruit.

When Isaiah was born, there was no crying. He had no heartbeat.

“Scary doesn’t begin to describe the feeling,” Gross said. “I had no idea if Isaiah was going to be alive the first time I got to touch him.”

Doctors were able to revive Isaiah, but the danger was far from over. He had multiple holes in his heart. Surgery would be needed, but first his little body had to grow.

“He was hooked up to so many wires and lights,” Gross said, recalling the many nights she spent in the hospital’s neonatal intensive care unit (NICU).

The scariest moment happened three months into their NICU stay. Gross was holding Isaiah and he suddenly stopped breathing. A group of nurses rushed in to revive him. Gross stepped outside the room and fell to the floor.

“That was rock bottom,” she said. “I curled up into a ball and sobbed. Fortunately, I had great nurses who not only saved Isaiah, but supported me during those darkest times.”

Our NICUs are centered around caring for newborns and their families.

At 4 months old, Isaiah was transferred to the Norton Children’s Heart Center, where surgeons repaired his tiny heart. A month later, the day before New Year’s Eve, Isaiah was able to go home for the first time. Finally, a sigh of relief.

Turning a life-changing experience into a career

Gross credits the staff at both hospitals for getting her through the experience.

“My fiancé and I don’t really have family in the area, but we were never alone during that time,” she said. “Norton became our family. Not only was the care exceptional, but the compassion was off the charts. We even had a nurse who canceled a vacation just to take care of Isaiah.”

Gross was so moved that she wanted to give back. About six months after Isaiah left Norton Children’s, she quit her job as a chef and was hired as a food services supervisor for Norton’s downtown campus. The purpose was two-fold.

A challenging road with purpose

“It was the perfect fit,” Gross said. “Chefs work crazy hours. Norton Healthcare has not only given me a better opportunity to take care of Isaiah, but it also allows me to use my personal experience to help others.”

“I talk to new moms and families who come through the cafeteria,” she said. “Many times they feel helpless and scared. I listen to their story and then share my journey. I think it provides them comfort knowing there is light at the end of the tunnel and that their babies are in the best hands possible.”

Today, Isaiah is an active 2-year-old and loving life. It’s been a challenging road but one Gross knows has purpose. Her job allows her to make the most of that experience.

“I’m proud to work [for Norton],” she said. “To be able to show the same level of service and compassion for patients and their families as Norton showed to me — it’s a great feeling to give back.”