Brittany K. Martin, M.D., keeps a scrapbook of former NICU patients who are thriving on their first birthdays and beyond. 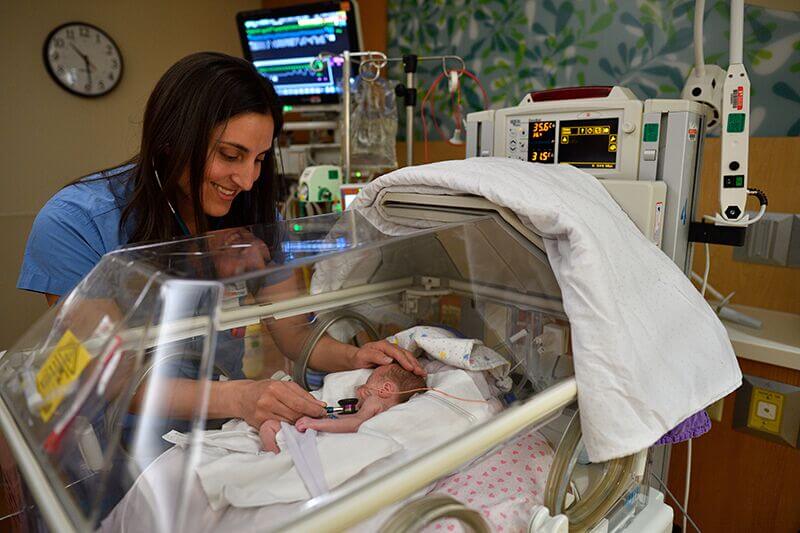 Brittany K. Martin, M.D., never had any doubt what she wanted to do for a living.

“I’m one of those lucky people who just always knew what I wanted to do,” she said. “I wanted to be a pediatrician as far back as I can remember.”

It wasn’t until she was in training as a young doctor that she realized she wanted to work in a neonatal intensive care unit (NICU). In the NICU, she says, people were just like her: meticulous, but also nurturing and kind.

Dr. Martin is now a neonatologist with Norton Children’s Neonatology. Neonatologists care for infants with a wide variety of health conditions. Some are born a few weeks prematurely and need help maintaining their body temperature and learning how to eat. Others are critically ill — born extremely prematurely with heart or lung defects, or serious infections. Some require a breathing tube, ventilator, chest tube and surgeries to stay alive.

Mother of two knows it can be terrifying

“A NICU stay is the toughest thing many families will endure,” said Dr. Martin, herself the mother of two children. “No parent expects to need our care when they learn they’re pregnant. The NICU is everyone’s worst-case scenario. It’s terrifying when your baby is sick.”

Dr. Martin said she has sat up all night with very sick newborns and had frank discussions with parents about their baby’s dire outlook. She tells parents to keep their heads up, eyes forward and, at the same time next year, to send her a picture on the baby’s first birthday.

“Newborns are a lot more resilient than we give them credit for,” she said.

As proof of their resilience, Dr. Martin keeps a scrapbook of former NICU patients who are now thriving on their first birthdays and beyond. The NICU also keeps a bulletin board filled with healthy children who began their lives on the unit.

More than 1,200 babies a year at the area’s only Level IV NICU

Dr. Martin grew up on a farm in Indiana. Her mother is a scientist, her father, an accountant. They raised corn, soybeans, chickens and turkeys. She attended Indiana University School of Medicine in Indianapolis and did her training at St. Louis Children’s Hospital in Missouri.

Dr. Martin recalled as a new doctor having to insert a breathing tube to keep a newborn alive, then three months later the joy of watching the baby — now thriving — go home.

Norton Children’s Hospital is the only Level IV NICU in the Louisville area. That means the hospital is a regional center with services to treat all medical and surgical needs of newborns, including extracorporeal membrane oxygenation (ECMO) for serious congenital heart and lung defects.

Norton Women’s Care and Norton Children’s offer expertise in caring for you and your baby. Include NortonBaby.com in your pregnancy.

Neonatal care is always improving, according to Dr. Martin.

“We’ve seen progress even in the course of my career,” she said.

When she began her training, babies who were born at 24 weeks could not be resuscitated routinely. Now, babies born as early as 23 weeks are resuscitated, she said.

Dr. Martin loves her job. Even though the baby is her patient, she says she’s taking care of the entire family.

“The NICU stay is often a long one, so we get to know families really well,” she said. “You get to see them through their toughest days and celebrate with them in happier times.”