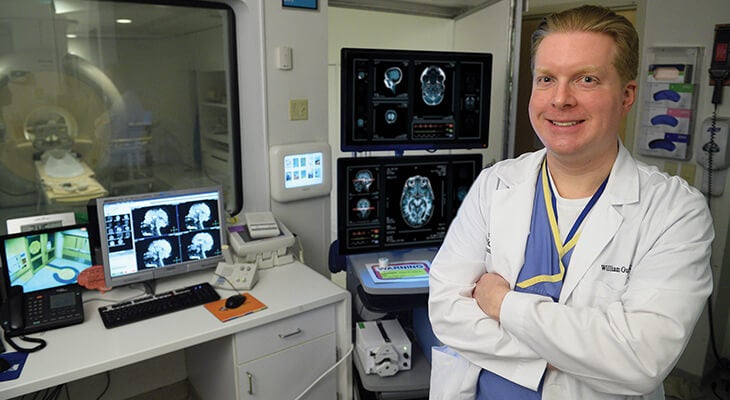 The technology, called Visualase, allows doctors to perform MRI-guided laser ablation surgery, which is less invasive and in most cases has a much shorter recovery time than opening the skull, currently the most common approach to brain surgery. Laser ablation requires a hole in the skull about the size of a pen top, which can be closed with a single suture. The surgery usually takes minutes to complete and most patients go home the following day.

“This approach allows us to much more safely get to deep targets and difficult-to-reach lesions in the brain,” said William C. Gump, M.D., pediatric neurosurgeon at Norton Children’s Hospital. “It’s an important next step in treating tumors and many debilitating diseases.”

Before laser ablation surgery, a frame is placed on the patient’s head and a CT scan orients the frame in three dimensions. Computer software plots the safest pathway to the lesion. The surgeon then inserts a laser applicator, which is about the diameter of a strand of spaghetti, and the patient is then taken to an MRI scanner to confirm the placement of the laser. After a test firing, the laser is heated to destroy the lesion.

Your gift to help Louisville’ not-for-profit children’s hospital could be tax deductible. Louisville-area families rely on access to specialized pediatric medical care. Help us ensure it will always be there when needed.

Previously, Kentucky’s pediatric patients had to leave the state to undergo laser ablation brain surgery. Now, thanks to a grant from the Children’s Hospital Foundation, Norton Children’s Hospital joins fewer than two dozen children’s hospitals around the country to have this technology.

While the procedure is brand new for local children, Norton Healthcare has been performing laser ablation surgery on adults for more than a year. It was the first hospital system in the region to offer NeuroBlate laser ablation therapy and has completed almost two dozen procedures using that technology.

Surgery often is needed for patients with epilepsy because medications only control seizures 60 percent of the time. In the United States, about 1 million people have epilepsy that can’t be helped through medication. For high-risk patients with deep brain tumors, laser ablation makes surgery possible because the laser probe traces a narrow path to the lesion. Open surgery in these patients would be impossible because it would damage surrounding brain tissue.

“Laser ablation surgery can be performed on children as young as a year old,” Dr. Gump said.