Schielar Skaggs almost didn’t make it – but he fought

Schielar Skaggs almost didn’t make it – but he fought

Schielar’s first surgery for hypoplastic right heart syndrome was on his third day of life. Things got tough before he got better. 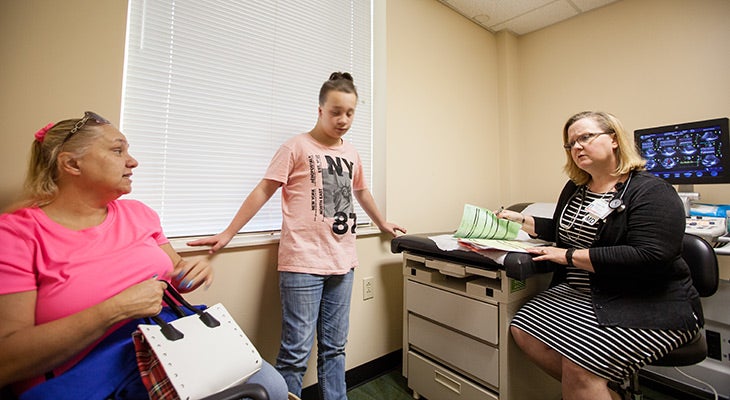 Before he was born, Schielar Skaggs’ parents, Terry and Melissa, worried about the life their son would have. Would he survive childbirth? If he did, would his life be short and filled with suffering and surgeries?

Tests during Melissa’s pregnancy showed Schielar had a complex congenital heart condition known as hypoplastic right heart syndrome with tricuspid and pulmonary atresia. Two valves on the right side of Schielar’s heart did not form properly, and his right ventricle was essentially absent. The right ventricle pumps blood to the lungs.

At the parents’ appointment, Lucinda T. Wright, M.D., a pediatric cardiologist with Norton Children’s Heart Institute, affiliated with the University of Louisville, reassured the couple that treatment options were available.

Dr. Wright told them about other patients she’s treated with the same condition who had successful surgery in childhood. According to Dr. Wright, medical science continues to make advances treating congenital heart disease. That information reassured the parents.

“We went home and we talked,” Terry said. “There was never any talk of terminating the pregnancy. We were in it for the journey.”

According to Dr. Wright, her goal is to educate and support parents faced with a diagnosis like Schielar’s.

Surgery on day 3, then the worst

Schielar had his first heart surgery at 3 days old, to use a Blalock-Taussig shunt, known as a BT shunt, to increase the amount of blood going to the lungs. He spent two weeks in the neonatal intensive care unit at Norton Children’s Hospital before going home.

At home, Melissa noticed Schielar was starting to turn blue and was having trouble breathing. By the time Melissa reached the local hospital, Schielar’s heart had stopped, according to Terry.

“She was just screaming, ‘My baby!’” Terry said. Doctors and nurses revived Schielar and he was airlifted to Norton Children’s Hospital. There, Terry sat next to his infant son, then only 2½ months old, with IVs and tubes giving him antibiotics and other treatments.

“The doctor said he might not make it through the night,” Terry said. “He was lying in bed. He wraps his hand around my fingers and looks at me with those beautiful blue eyes. He was saying I’m not ready to leave this world. I’m going to fight,” Terry said.

Schielar is now a healthy 13-year-old and needs to see Dr. Wright only once a year. He is a quiet seventh grader who does well in school and plays percussion in band.

Congenital heart disease care from pregnancy and into adulthood

According to Dr. Wright, Schielar is a great example of the continuity of care for congenital heart patients at Norton Children’s Heart Institute.

“We cared for Schielar’s mother when she was pregnant with Schielar, and we will continue to care for Schielar into adulthood,” Dr. Wright said.

The Skaggs family joined the Brave Hearts support groupto share their experience with others who are just starting their journey.

“There’s a lot of sharing and understanding,” Terry said.

Terry marvels at the courage and fight his son has shown in life.

“Most of us will never see half of what he’s had to deal with,” Terry said.