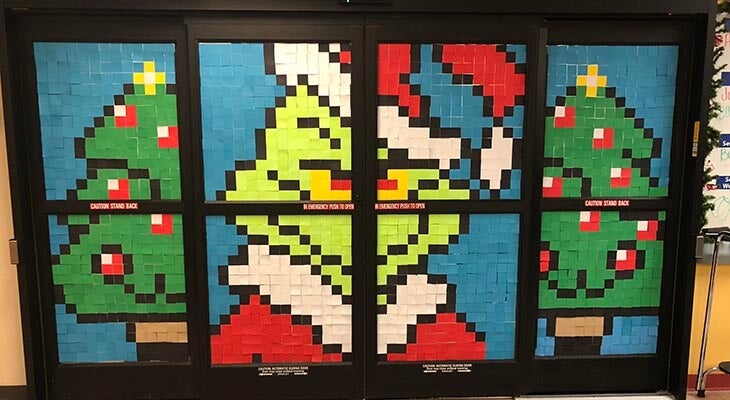 Norton Children’s Hospital is in the midst of its third annual holiday decorating contest. The contest is a way for staff to help children and families get into the holiday spirit while at the hospital. The competition also recognizes units that work together to decorate their areas of the hospital — and to get everyone excited with some friendly competition.

The Norton Children’s Hospital emergency department decided to decorate with one of the holiday season’s biggest villains: the Grinch from “How the Grinch Stole Christmas.”

The idea took shape after decorating the neon green poles in the main waiting area. While researching online, staff found a way to create the Grinch’s face using Post-it notes.

“I had originally thought of doing it on one of our walls outside our trauma area,” said Steven Stivers, R.N. “Nurse Manager Liz Younger suggested putting our Grinch on the ambulance doors, and that got me headed down that direction.”

Time to get creative

“At that point, I had to figure out how many pieces we needed of each color,” Stivers said. “I originally thought Post-it notes but realized we wanted something a little thicker. So I bought card stock in all the different colors and hand cut them on a paper cutter.”

The next day, Stivers and his co-workers went about decorating the ambulance doors during their downtime. Stivers counted and directed the placement of the squares. The intermittent work stretched between 8 a.m. and 2:30 p.m.

“I just love being creative,” Stivers said. Before becoming a nurse, he worked in graphic design for 18 years.

“The reactions have been astounding,” he said. “There have been so many EMS, medical personnel and patients that just look at it and smile in amazement. It can be seen from inside and outside. It was a fun project and people are just amazed when they see it.”