The dangers of screen time, and how to limit it within your family 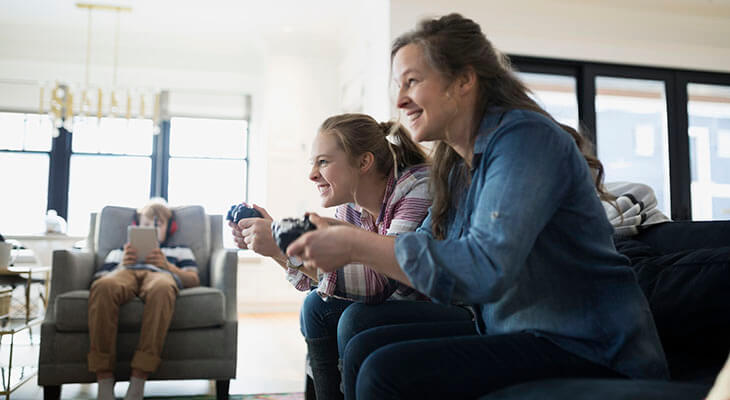 Jay spent the start of summer glued to his Xbox. When his mom brought him to Healthy Living Workshops, a wellness series sponsored by Kohl’s Cares and held by Norton Children’s Prevention & Wellness at Shively Community Center in Louisville, he admitted that sometimes he would spend all day in front of the screen.

Kids and teens are feeling more isolated due to screen time. The World Health Organization identified gaming disorder as a diagnosable mental health condition in June.

Kids are spending less time with family and friends. They are missing out on being outdoors. The danger in spending too much time in front of a screen — whether it’s a smartphone, video game, tablet or TV — is that we’re seeing an alarming trend in higher rates of depression and anxiety that seems to have a connection to excessive screen time.

Limiting screen time is easier said than done. I struggle with this issue myself as a mom of two young daughters. At a recent community dinner and conversation about digital life held at Norton Children’s Medical Group – Shelbyville, families were invited to discuss issues and solutions to limiting screen time. A mom of a teen daughter expressed the dilemma. Shortly after giving her daughter a smartphone, mom noticed that the device was causing a rift in their relationship.

“Sara is on her phone all afternoon and does not come out of her room,” she said. “Before she had a phone, this used to be family time.”

Many parents share the frustration. From the teens’ perspective, many feel that they are missing out if they are not consistently plugged into their devices.

Tia Alton, M.D., pediatrician with Norton Children’s Medical Group – Shelbyville, suggests limiting screen time simply by not allowing children to have phones. If that’s not an option, she urges parents to think about setting limits.

As parents, we need to set clear limits and be models for healthy screen time use. Encourage your kids to invite friends over and see each other face to face, rather than socializing through group chat or social media. Host a friendly dinner in your home. Create a family media plan by holding a family meeting and deciding together what your family’s screen time limits are and how you will hold each other accountable.