Meredith Zuhars was totally surprised by her pregnancy with her son, Zachary. Even more surprising was his birth three months prematurely, with a NICU stay of 80 days. 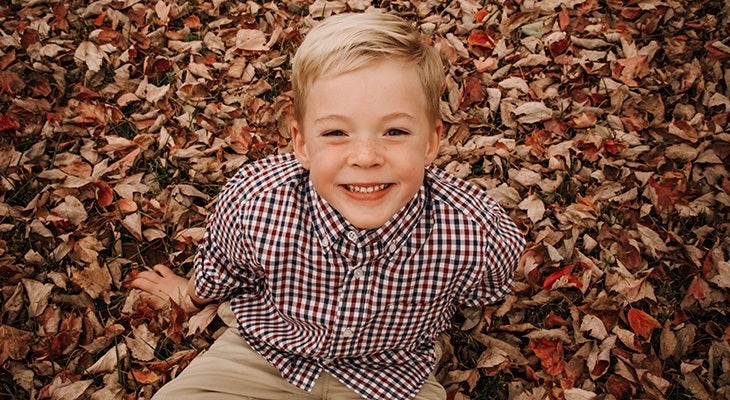 Meredith Zuhars and her husband, Dave, were totally surprised by her pregnancy with their son, Zachary. They were raising a teen and preteen at the time, and both working, Meredith as a nurse. They were not even entertaining the idea of another child. Their “surprise baby” had another surprise: Zachary was born Aug. 5, nearly 2½ months shy of his Nov. 4 due date. Zachary experienced an 80-day stay in the neonatal intensive care unit (NICU).

“This little surprise came along while we were raising a 12- and a 16-year-old,” Meredith said. “It was a pretty uneventful pregnancy for me being well older than 30.”

One night, Meredith came home after her nursing shift at Norton Audubon Hospital. Her daughters had friends over for a sleepover when Meredith started to feel unwell.

“I ended up going to the hospital and ended up having Zachary 12 hours later,” Meredith said.

According to Meredith, the obstetrics team she worked with at Norton Women’s & Children’s Hospital tried to delay Zachary’s delivery with “everything in their arsenal.” When it became clear Zachary was coming, the team prepared for his delivery and Zachary’s transfer to the NICU. Zachary would be in the Level III NICU at Norton Women’s & Children’s Hospital for over 2½ months.

“He had a pretty uneventful NICU stay,” Meredith said. “He just needed the time to grow. It was uneventful in the fact that he didn’t have to have emergency heart surgery or [experience] necrotizing enterocolitis. We didn’t have any of that stuff, but it was a long and drawn-out process.”

After Zachary’s first six weeks in the NICU, Meredith returned to work.

“It added a wholly different twist to the experience. Trying to manage having big kids at home, going back and being a nurse and taking care of other people and having a little one in the hospital. It was all very tricky to manage.”

When she, Dave or her mother couldn’t be with Zachary during the day, Meredith would ask the NICU staff if one of the hospital volunteers who hold NICU babies could hold him.

“I didn’t want him to get used to lying there without touch or warmth. I wanted all of that for him,” Meredith said. “So if I couldn’t be there, or my mom couldn’t be there, I wanted someone else to come. [The staff] would usually let someone else come in and rock him and talk to him, which was awesome. It kind of helped with that mom guilt a little bit.”

While Zachary did not experience any congenital conditions that require complex intensive care, he did experience some common conditions associated with babies born prematurely.

Zachary experienced patent ductus arteriosus (PDA), a heart condition which often occurs in premature babies. PDA usually resolves on its own as a child grows. Zachary was monitored by pediatric cardiologists due to his PDA. He also experienced retinopathy of prematurity, an eye condition which can require surgery in serious cases.

“One of my biggest fears was transferring downtown [to Norton Children’s Hospital] for eye surgery,” Meredith said. “He did have immature retina, and they do these eye exams once a week on these little guys. And if it goes past a certain point, then they are usually rushed downtown for emergency eye surgery. So, I was always terrified that that was going to happen, but he never progressed that far.”

The most fragile babies get quality care at top-rated neonatal intensive care units that work in collaboration with Norton Children’s Maternal-Fetal Medicine.

Zachary went home on Oct. 28, which was the day that Meredith was originally scheduled to have a cesarean section (C-section). Zachary was seen in the Norton Children’s Neonatal Follow-up Clinic for several months after going home, but was soon graduated to care with his pediatrician. He graduated from cardiology care on his first birthday.

Now in the second grade, Zachary is a happy, busy child, according to Meredith.

“He loves to play baseball and golf and swim. He is into everything, especially if it involves any kind of machinery. He loves taking things apart and putting things back together. He’s very inquisitive.”

Looking back on her family’s experience while Zachary was in the NICU, Meredith says she doesn’t know how they did it. But she says that while there’s no way a family truly can plan to have a child in the NICU, trusting your child’s neonatologists and the NICU team can keep you strong.

“What helped me the most was getting close to the staff,” Meredith said. “He would have the same two nurses during the day, the same two nurses at night. And then the same one on the weekend. So it’s that continuity of care that helped me feel the best, because those ladies knew him better than me. They had the experience to look at him and know when something was wrong, even if his bloodwork was OK, and could help prevent a bad situation from happening. They know the babies; they know what to do. And they’ll be the ones who look out for your child.”