Devin Naik discovered during pregnancy that her daughter had bilateral clubfoot. The family has embraced the Ponseti method for daughter Mila’s condition. 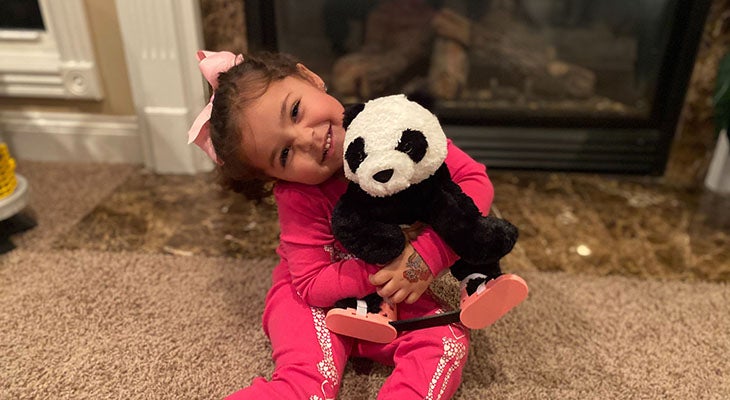 On Christmas morning, 2 year-old Mila Naik woke up without her clubfoot brace. She was not happy with her mom, Devin, who in the midst of Christmas Eve merriment, thought it best for Mila to have a clubfoot-treatment-free night’s sleep.

“She woke me up Christmas Day and said, ‘Mom, where are my boots?’ She let me know she did not appreciate it,” Devin said. “For Christmas, we got her a little stuffed animal that actually comes with clubfoot braces, the boots and bars on it. Now, every night, she likes to put the braces on the panda before I put her boots and bars on.”

It’s a sweet nightly ritual that Devin says helps keep her and her husband motivated with Mila’s clubfoot treatment — Mila’s bracing will need to continue until she turns 5 or 6 years old. According to Devin, clubfoot treatment for children can be stressful and hard on parents, but the dedication and results speak for themselves.

Devin’s pregnancy with Mila was her third. Her first two pregnancies had no issues. So when Joilynn M. Evans, M.D., OB/GYN with Advocates for Women’s Health, a Part of Norton Women’s Care, told her after her 20-week anatomy scan that Mila might have clubfoot, Devin was shocked. Dr. Evans referred her to Jonathan W. Weeks, M.D., maternal-fetal medicine specialist with Norton Children’s Maternal-Fetal Medicine, to confirm the potential diagnosis and look for any other conditions Mila might have.

Clubfoot can affect only one of the baby’s feet or be bilateral (affecting both feet).

“Dr. Weeks did an ultrasound in his office and confirmed that he saw bilateral clubfoot,” Devin said. “He didn’t see any other issues, which was reassuring. As a mom, I think your mind can go to a worse-case scenario, so I wanted to start planning for her care immediately.”

After the presumptive bilateral clubfoot diagnosis also was detected by Dr. Weeks, Dr. Evans referred Devin to James E. Moyer, M.D., pediatric orthopedist with Norton Children’s Orthopedics of Louisville, affiliated with the UofL School of Medicine. Dr. Moyer, one of only a handful of nonsurgical orthopedists in the nation, is the lead physician for the clubfoot clinic at Norton Children’s Orthopedics of Louisville.

“We met with Dr. Moyer at the 28-week mark of my pregnancy,” Devin said. “In the weeks leading up to meeting, I’d started doing my own research online and reading other people’s stories, and what treatment methods they used for their kids. It seemed like the Ponseti method had the best success. So then once Dr. Moyer said he was very big on following Ponseti to the book, and exactly what he envisioned for Mila’s care, I was like, ‘OK, this is who I want to stick with, this is who I feel comfortable with.’ He’s so personable, and we’ve only seen Dr. Moyer for her clubfoot care.”

Mila was born in March 2018. Soon after, Devin called Dr. Moyer to let him know that Mila’s bilateral clubfoot diagnosis had been confirmed at her birth.

“And he had said, ‘Enjoy your baby, you know, act as if nothing is wrong, just enjoy her and bond with her for a couple weeks,’” Devin said. “He told me to bring her in whenever we felt ready — there’s no certain time frame to start treatment. He stressed that he wanted us both to be very sure that we were emotionally ready to start the process. Because once it starts, it’s very involved, and you have to be 100% committed.”

The Ponseti method begins with the correction phase, where a child is put in casts for about four to eight weeks, depending on a child’s unique situation. During casting, a child has a cast removed and then reapplied every week. The initial material is a plaster cast to mold the foot optimally. At Norton Children’s Orthopedics of Louisville, this cast is overwrapped with fiberglass material.

Three weeks after her birth, Mila began her clubfoot treatment, receiving her first set of casts. At the time, Dr. Moyer said that treatment could help move both of Mila’s feet to a neutral/correct position, but that her left foot may have more trouble than her right.

“One of the things that stuck out to me as a mom during the casting process is just how patient Dr. Moyer was with her,” Devin said. “He would pull back on her feet to where she was comfortable going. If she would start squirming or there were any signs of discomfort, he would say, ‘That’s enough, and we’ll do more next week.’”

The casting phase comes with challenges for parents. According to Devin, the first couple of days after a new cast was applied would be difficult for Mila. She would have trouble sleeping, would cry and have difficulty being in a comfortable position. Dr. Moyer explains the pain of casting much like the experience of adjusting orthodontic braces on teeth; a sore, achy feeling from the foot being stretched and pulled while being stuck in a new position.

“Casting was challenging,” Devin said. “Having a newborn baby is challenging enough, let alone when they’re uncomfortable and hurting. After those first few hard days with a new cast, she would get totally comfortable with them, and she’d be kicking her legs around no problem. And then it was almost time for the next cast.”

Mila’s casting phase lasted four weeks; at her fourth casting appointment, her feet were in a neutral/correct position. She was then ready for a heel cord tenotomy performed by Star L. Nixon, M.D., pediatric orthopedic surgeon with Norton Children’s Orthopedics of Louisville. A heel cord tenotomy is a minor surgery during which the Achilles tendon is cut to help lengthen the tendon. This helps release the foot from a stuck-down position. Nearly all children with clubfoot will need a heel cord tenotomy as part of their treatment.

“It was stressful as none of our children had surgery before,” Devin said. “We loved Dr. Nixon, and Dr. Moyer was with her during surgery, too, to put on her cast.”

Mila was in the cast for three weeks after her procedure to let the tendon heal and hold the feet in the correct position. After the cast, she was fitted with a clubfoot brace, which includes two open-toed boots that are connected by a metal bar. The brace holds a child’s feet turned outward and in the corrected position. Bracing lowers the risk that a child’s foot will revert to its clubfoot position. Without bracing, recurrence of clubfoot in the first year is close to 90%, according to Dr. Moyer.

“So she’s still in them at least 10 to 12 hours a day,” Devin said. “We have a set schedule with her, and at seven o’clock at night, we get her ready for bed and put the boots and brace on. And then she would still, you know, be up for a little bit and play with them. And then we would take them off every morning at 10 o’clock. It definitely helps me as a parent to stay on top of her clubfoot treatment because she loves them. They are almost like her little security blanket going to sleep that that she has to have.”

Helping other parents on their clubfoot journey

Devin has joined social media groups and talked to other parents about her experience with Mila, in hopes of inspiring other parents to stay strong through what can be a tough process.

“Having your newborn baby diagnosed with clubfoot is terrifying,” Devin said. “I cried myself to sleep several times wondering if my daughter would have any quality of life, wondering if she would walk. If your OB tells you that your child might have clubfoot, seek out pediatric orthopedists and do your research. Find someone you trust, and I tell other parents to trust the process, trust your care team, and never give up. I would take pictures of her feet so I could see the progress and remind myself of how far we’ve come. It helped me keep going and to push forward when things would get tough. Clubfoot is a very treatable condition, and your little one will walk.”