An ear infection can cause hearing loss in a child, but the symptom is usually temporary and can last a few weeks or more even after the infection clears. 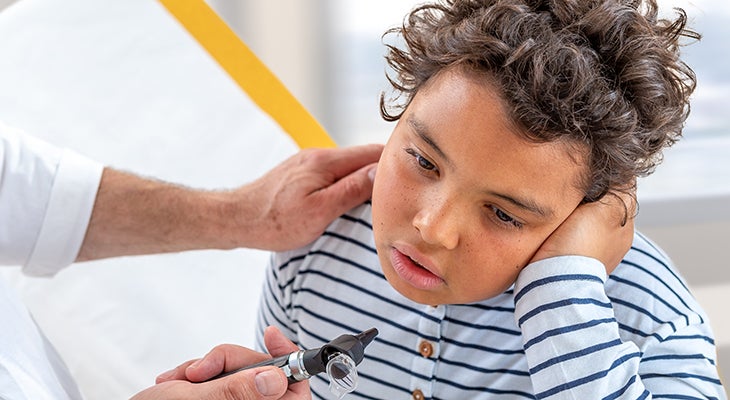 An ear infection can cause hearing loss in a child, but the symptom is usually temporary and can last a few weeks or more even after the infection clears.

If the fluid and any hearing loss are still present after more than three months, ear tubes may be recommended. An ear, nose and throat surgeon can install the tubes while your child is under general anesthesia. Children typically go home the same day.

The surgeon makes a small hole in the eardrum and places the tube to allow air pressure in the middle ear to equalize with outside air pressure, allowing fluid to drain. Once the fluid is gone, hearing should return. The tubes usually will fall out after six months to a year.

“Children are more vulnerable to ear infections as the eustachian tube that drains fluid from the ear and equalizes air pressure is shorter and more horizontal than in adults. The adenoids in children also can interfere with the eustachian tubes,” said Swapna K. Chandran, M.D., pediatric otolaryngologist with Norton Children’s ENT & Audiology, affiliated with the UofL School of Medicine.

Three quarters of children have at least one ear infection by age 3, and about half of them will have three or more ear infections.

Too much fluid in the ear eventually can tear the eardrum. A ruptured eardrum usually will heal within a few weeks to a couple months with no lasting hearing loss. More severe ruptures, typically due to injury, may require surgery.

When would ear infections cause permanent hearing loss?

“Call your pediatrician if your child has an earache or sense of fullness in the ear, especially when combined with a fever. Even if you can work through ear infections at home, keep your pediatrician informed of how frequently they happen in case treatment is needed to prevent permanent damage,” Dr. Chandran said.

The ear, nose and throat and audiology providers of UofL Physicians – Pediatrics are now part of Norton Children’s, located downtown in the Novak Center for Children’s Health.

Permanent hearing loss can result from a chronic infection in the middle ear. Recurring infections over time can cause permanent damage to the eardrum, the bones of the middle ear or the hearing nerve.

Signs of hearing loss in children

A child whose eardrum has ruptured might have ringing or buzzing in the ear and not hear as well as usual.

Signs of an ear infection in an infant or toddler

Older kids can complain about ear pain, but a younger child might just tug at the ear or be fussy and cry more than usual.