Child with SMARD1 thriving with 5-in-1 home ventilator

Child with SMARD1 thriving with 5-in-1 home ventilator 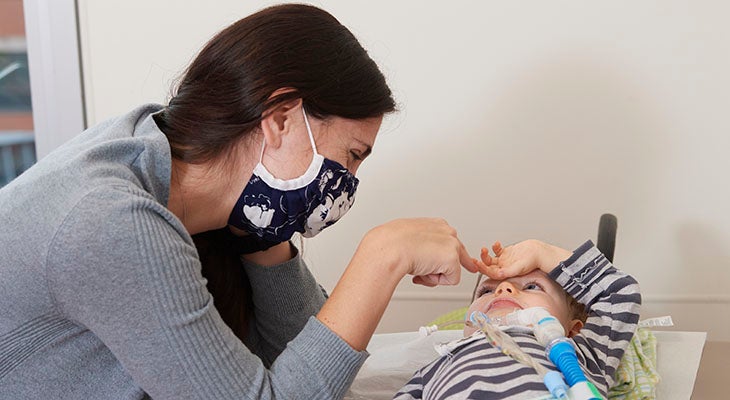 The day before Thanksgiving 2018, the Howell family was traveling from Louisville to Frankfort to visit relatives. During the drive, 4-week-old Brooks started crying. It was the beginning of the family’s journey with the rare disease spinal muscular atrophy with respiratory distress, Type 1 (SMARD1).

“It was a very different cry,” said Jessica Howell, Brooks’ mom. “It sounded very strange, and we realized he wasn’t breathing. We gave him CPR and called 911. The ambulance took us to Norton Women & Children’s Hospital. They were great and gave Brooks a full work-up.”

The care team mostly was concerned with how small Brooks was. He hadn’t gained any weight since birth. They believed that Brooks might have gastroesophageal reflux, which can interfere with gaining weight and cause breathing issues in babies. They sent the Howells home with medicines for reflux, and told them to look into higher-calorie formulas and to follow up with their pediatrician.

The following week, Jessica gave Brooks a bath to prepare for the visit he had with his pediatrician. Jessica again heard the cry that startled the family in the car.

“It sounded like he was so panicked,” Jessica said.

She gave him CPR, and when the paramedics arrived he was breathing shallowly.

“The paramedics put him on oxygen and he seemed fine,” she said.

Once they arrived at Norton Children’s Hospital, Brooks’ blood oxygen levels began to drop again. He was taken to the pediatric intensive care unit (PICU) to be monitored. The next day, he experienced another episode of his blood oxygen levels falling rapidly. Brooks’ care team decided that he should be intubated and placed on a ventilator.

“He was unstable when he was intubated … he coded twice,” Jessica said. “But what they did notice when he got intubated, his lungs opened up — it was almost like he liked the pressure of the ventilator.”

The PICU physician asked for a pediatric pulmonologist to look at Brooks. The pulmonologist ordered a bronchoscopy, a test where a camera is guided down the throat so doctors can see a child’s airways.

“Every time he took a breath, his airway was closing,” Jessica said.

According to the pulmonologist, Brooks showed bronchomalacia in the airway to his left lung. Bronchomalacia is weak cartilage in the walls of the bronchial tubes, which causes the main stem bronchus (airway) to collapse when breathing out (exhalation). The condition typically happens in children younger than 6 months old. Children usually show signs of the condition with louder breathing or wheezing. Most children outgrow symptoms of bronchomalacia, with the condition usually resolving itself between 2 to 6 years of age. Brooks’ medical team suggested tracheotomy — surgery to create a breathing hole in the windpipe — to allow for long-term ventilation, as well as genetic testing to understand what could be causing the bronchomalacia. Brooks had gastrostomy tube surgery to help with feeding and drinking in early January 2019. He then began to gain weight consistently.

And then in February 2019, the genetic testing came back and the Howell family received Brooks’ diagnosis: spinal muscular atrophy with respiratory distress, Type 1 (SMARD1). The condition is considered to be an extremely rare type of spinal muscular atrophy (SMA). In SMARD1, there is permanent weakening of alpha motor neurons of the spinal cord. Alpha motor neurons supply nerves to skeletal muscle and stimulate muscle contraction.

Early symptoms of SMARD1 can include a weak cry; feeding issues; difficult and loud breathing, especially when inhaling (inspiratory stridor); and recurring pneumonia. Symptoms of SMARD1 usually develop between 6 weeks to 6 months of age due to paralysis (loss of strength and control over a muscle or group of muscles) of the diaphragm and abdomen. Paralysis means that a part of the body is unable to move. As the diaphragm of a child with SMARD1 becomes more and more paralyzed, the child starts to breathe with an increased respiratory rate (tachypnea). It eventually causes an inability to breathe (respiratory failure). Children with SMARD1 may die from respiratory failure before 13 months of age if not supported with mechanical ventilation.

“There are only about 100 kids in the world with this gene mutation,” Jessica said. “So currently there’s no access to any kind of treatment at this time.”

“He can still use his hands and his arm. But he doesn’t have any trunk strength,” Jessica said. “So he can’t hold up his head. He can’t sit up.”

His lower body is also affected: According to Jessica, Brooks can kick his legs from his knees but can’t lift his legs to his chest.

At the hospital, Brooks was connected to a portable home ventilator at the time of his diagnosis, in preparation for going home, according to Jessica. She and her husband, Cameron Howell, began to prepare for leaving the hospital and learning to care for Brooks at home, including how to use the ventilator.

“We were learning all of his care management,” Jessica said.

Before he could go home, a setback happened when Brooks experienced a collapsed lung at the end of February. He was placed back on a hospital ventilator, which produced a complete change, according to Jessica.

“I was like, ‘This is my kid,’” Jessica said. “I knew that he was acting funny, but I didn’t really know why. He wasn’t interacting because he was working so hard to breathe.’”

In hopes of sending Brooks home as he improved, the team again placed Brooks on the portable home ventilator, and he struggled again.

“He actually got sick,” Jessica said. “And so we said, ‘You’re not putting him back on that.”

According to Jessica, because so few children are affected by SMARD1, the community of children and parents is a close one. She talked with other SMARD1 families about Brooks’ experience, and an 11-year-old child with SMARD1 shared her experience with a similar ventilator. Jessica brought her concerns to Scott G. Bickel, M.D., pediatric pulmonologist with Norton Children’s Pulmonology, affiliated with the UofL School of Medicine.

“We were lucky enough to have Dr. Bickel,” Jessica said. “He sat and listened to us.”

Dr. Bickel, alongside Ronald L. Morton, M.D., another pediatric pulmonologist with Norton Children’s Pulmonology, investigated and presented a solution to the Howells: the VOCSN. It’s a medical device which integrates five separate functions including a ventilator, oxygen concentrator, cough assist, suction and nebulizer, into one unified respiratory system device.

“At the time, it was such a setback that he couldn’t get on a home ventilator comfortably,” Jessica said. “But looking back now, it’s such a blessing, because the [VOCSN] has five functions in one. So anytime we go anywhere, we don’t have to lug around all these different machines; we have it all in one place. And that was purely because Dr. Bickel was willing to investigate and find something that worked better for Brooks. We couldn’t be more pleased with how they went above and beyond to find something that was going to be best for him.”

Brooks was placed on the VOCSN for the first time in April 2019. However, according to Jessica, he didn’t adjust well to the machine at first.

“But the Norton Children’s doctors, as well as the VOCSN engineers, got together and they tweaked things and modified things and made changes and came back in May and put him on it,” Jessica said. “That time, it was just seamless. He didn’t even notice he was taken off the hospital ventilator.”

Unfortunately, Brooks became ill soon afterward and again had to be placed on the hospital ventilator. Once he recovered, he was able to go back to the VOCSN. The family once again began learning care management. Within about a month, Brooks went home in July 2019 after 225 days in the hospital.

According to Jessica, aside from some small setbacks, including Brooks catching an occasional respiratory illness and needing a visit with Dr. Morton for additional breathing treatments, her son has been doing extremely well.

“We’ve had to call their on-call number once,” Jessica said. “It’s really great knowing that we have an on-call number, and we have the number of their nurse and their respiratory therapist, and they always answer. And they’re so responsive to what Brooks needs, whether it’s seeing him because he needs a new prescription or whatever it is. They’ve been integral in us being able to keep him home and healthy.”

Looking toward the future and potential gene therapy for SMARD1

“Dr. Lakhotia is super supportive,” Jessica said. “She’s been so positive about the type of life he can have. But she did say, you know, there’s nothing, nothing that we can do for him other than address his symptoms. But if you find anything, you know, let us know.”

According to Jessica, Dr. Lakhotia has participated in calls with the family and researchers looking into therapies.

“In terms of our experience with the doctors and the care, it’s been nothing but encouraging,” said Brooks’ father, Cameron. “We know, unfortunately, for a lot of the SMARD families that we’ve been in contact with, when their hospitals told them about their kids, it was communicated in a very hopeless and crushing way for some of the families that we know across the country. It was the exact opposite with the doctors at Norton Children’s, and I think that was makes pretty big difference. There’s hope.”