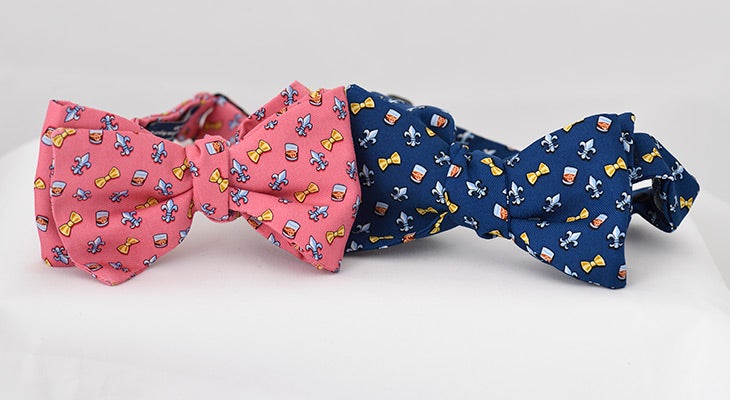 Derby week is the time to get that new bow tie or neck tie for the festivities.

The ties feature bourbon, Fleur de Lis and bow tie images, and come in pink, navy blue and red. Bow ties retail for $60 and straight ties for $70, with all proceeds benefiting the hospital.

Bourbon & Bowties is a culinary event that features more than 40 chefs from many of Louisville’s best-known restaurants, who prepare specialty hors d’oeuvres. This year’s event will be June 6 at Fleur de Lis Farm in Prospect, Kentucky, and benefits Norton Children’s Hospital through the Children’s Hospital Foundation. It is presented by Northwestern Mutual.

Each year, Bourbon & Bowties is held in honor or memory of a Norton Children’s Hospital patient. Bourbon & Bowties was established in 2010 and was held in memory of Charles W. Gant, a loving and energetic 8-year-old boy who passed away from viral encephalitis on June 3, 2009. Family and friends established this event to give back to Norton Children’s Hospital for the wonderful care Charles received during his illness, as well as to ensure other children have access to top-notch medical care. On this year’s 10th anniversary, the event also will honor and remember former head chef and host Dean Corbett.

Tickets for Bourbon & Bowties will go on sale May 9 at 9 a.m. and usually sell out in less than 10 minutes. Tickets will be available at NortonChildrens.com/BourbonAndBowties.