A boy’s parents’ desire to raise money for the Children’s Hospital Foundation and one of Louisville’s top chefs teamed up 10 years ago to start Bourbon & Bowties. 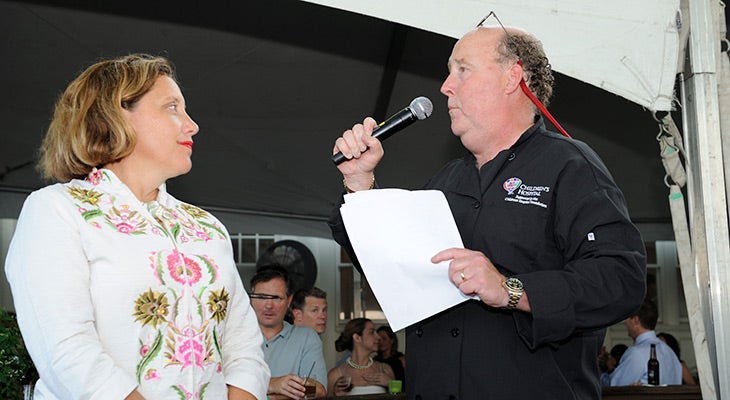 Two families with one common cause. That’s what led to the creation of Bourbon & Bowties, now celebrating its 10th year as a premier fundraising event for the Children’s Hospital Foundation.

Finding a way to turn grief into a positive force after losing their son, Charles, in 2009, Lenny and Kelly Gant began to plan a fundraiser for Norton Children’s Hospital. They wanted to give back to the team who had taken such great care of Charles. The Gants sought to host a dinner and sell a specially created bow tie with all of Charles’ favorite things on it.

At the same time, a community group was working with the late Dean Corbett, then head chef and owner of Corbett’s: An American Place, to hold a fundraising event for Norton Children’s Hospital. Dean had offered to not only host the event, but also close the entire restaurant just for the cause.

“Through his vision for this event, $1.7 million has been raised to directly benefit children in need of specialized care at Norton Children’s Hospital so that they don’t have to travel away from their hometown.”

Each year since then, the event has honored a different child who has been cared for by Norton Children’s. It also has grown to include 43 chefs. A highlight of each year’s event remains a specially created bow tie and bangle designed to reflect each child’s personality.

In late 2018, the community lost Chef Dean. With this year being the 10th anniversary of Bourbon & Bowties, the June 6 event will look back at the past nine years’ incredible children as well as pay tribute to Dean.

Tickets go on sale May 9 at 9 a.m. at NortonChildrens.com/BourbonAndBowties. Sponsorships also available. Call (502) 629-8060 for details.

“Chef Dean would want nothing more than for his legacy to continue in a way that serves the community he loved,” said Lynnie Meyer, Ed.D., R.N., CFRE, senior vice president and chief development officer, Norton Healthcare.

“Through his vision for this event, $1.7 million has been raised to directly benefit children in need of specialized care at Norton Children’s Hospital so that they don’t have to travel away from their hometown.”

This year’s event promises another amazing lineup of chefs. Geoffrey Heyde, owner and head chef of Fork & Barrel, has stepped into a leadership role with chefs Tavis Rockwell and Paul Sant.

“We will be carrying on the legacy of Dean and his vision of helping children and families of Norton Children’s Hospital,” Geoffrey said. “I am honored to be a part of such an amazing charity that gives back so much to the community.”