Babies get a health boost

Babies get a health boost

Helping more babies live to see their first birthdays is the goal of a new coalition in Louisville. 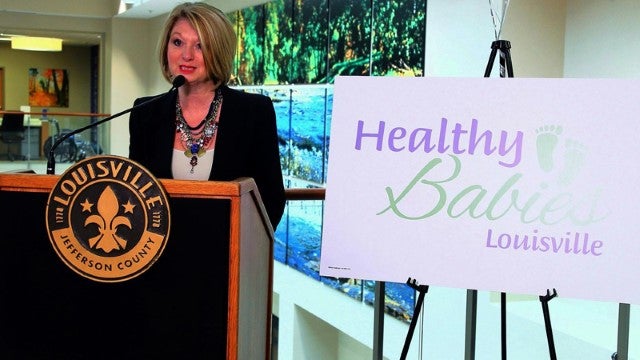 Helping more babies live to see their first birthdays is the goal of a new coalition that includes Norton Children’s Hospital and Norton Healthcare. In Louisville, there are nearly seven infant deaths per 1,000 children, which is higher than the national average of 5.5.

“Health has been a top priority of my administration since day one,” said Louisville Mayor Greg Fischer. “Good health for each person begins even before birth. It begins with a safe, healthy pregnancy. My goal is for every mom to have a safe pregnancy and every baby to get that healthy start. Healthy Babies Louisville unites some of our city’s best healthcare and social service agencies in a shared goal of improving infant health in our community.”

“Healthy Babies Louisville will allow us to build on past successes and share what each of us has learned,” said Charlotte Ipsan, RNC, MSN, NNP-BC, chief administrative officer, Norton Women’s & Children’s Hospital and Healthy Babies Louisville steering committee member. “With all of us coming together, we can leverage our resources and achieve better health for our community’s infants and their families.”

Victoria Jones, a Louisville mother of six whose oldest daughter is headed to college on a full scholarship, said families often need support in child rearing. “My husband and I have a huge support system of parents and relatives, but we’ve also benefited from family programs like Healthy Start.”

Immediate projects that Healthy Babies Louisville plans to take up include reinstituting the Fetal and Infant Mortality Review Board to investigate the causes of fetal and infant deaths, increasing referrals to prenatal and perinatal services through the Metro United Way 211 call center and increasing access to mental and behavioral health services for families and children.

“The 2-1-1 information line is the number to call when you don’t know who to call,” said Glenn Powell of Metro United Way. “Moms and dads can call us at 2-1-1 to find all the services they need to help them raise healthy children.”

Healthy Babies Louisville will use the Collective Impact Framework to achieve its goals. The Collective Impact approach is premised on the belief that no single policy, government department, organization or program can tackle or solve the increasingly complex social problems we face as a society.

The approach calls for multiple organizations or entities from different sectors to work on a common agenda, shared measurement and alignment of effort. Unlike collaboration or partnership, Collective Impact initiatives have centralized infrastructure – known as a backbone organization – with dedicated staff whose role is to help participating organizations shift from acting alone to acting in concert.

For more information on the Healthy Babies Louisville, visit www.healthybabieslouisville.org or call 574-8661.