The two main arteries leading to and from Miles Fitzmaurice’s tiny heart were switched and had to be restored to their correct position. 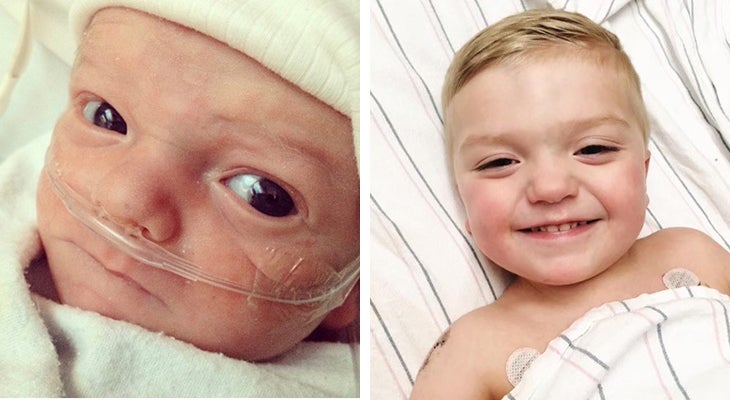 For Lauren Fitzmaurice of Owensboro, Kentucky, after 30 weeks of pregnancy, her due date was starting to seem like it was within reach. Pregnant with her second son, Miles, she was diagnosed with gestational diabetes, prompting another ultrasound — all pretty normal stuff.

But Lauren’s local OB/GYN noticed something not normal, an anomaly that needed further evaluation during an ultrasound at 37 weeks to monitor the low fluids around Miles and his size. That same day, within hours of her ultrasound, Lauren was meeting with a maternal-fetal medicine specialist at the Norton Children’s Hospital Outpatient Center – Owensboro.

His body wasn’t getting the oxygen it needed. The condition — transposition of the great arteries — was untreatable just a generation or two ago and was almost universally fatal within the first year of life.

The plan to save Miles takes shape

That wasn’t going to be Miles’ fate. Thirty years or so ago, pediatric heart surgeons started performing arterial switch operations to reconnect the arteries to the correct sides of the heart.

Erle H. Austin III, M.D., started performing the procedure at Norton Children’s Hospital shortly after completing his pediatric cardiothoracic surgery fellowship at Boston Children’s Hospital Medical Center in Massachusetts in 1987. As these babies started to grow up, it became apparent that the procedure didn’t merely allow survival, but the kids were going on to live normal lives; some became athletes.

Since then, Dr. Austin has performed hundreds of arterial switch operations.

Within a few days of Miles’ diagnosis, Lauren and her husband traveled to Louisville to Norton Children’s Heart Institute, affiliated with the UofL School of Medicine, to meet with the team of heart specialists. Dr. Austin would be Miles’ surgeon.

Lauren, her husband and the medical team created a plan for before, during and after birth for both mom and baby.

“Meeting the full team and having a plan brought a comfort level to ease my concerns,” Lauren said. “I felt more confident. I spent the last several weeks working closely with the doctors as they monitored Miles.”

“My husband and I were fortunate to spend his first moments of life together, peacefully knowing the heart team was ready and waiting,” she said.

Miles was taken across a pedway from the delivery room to the neonatal intensive care unit (NICU) at Norton Children’s Hospital. Dr. Austin restored Miles’ arteries to their correct position in the infant’s first week of life.

“Miles was born with a range of congenital heart defects and abnormalities causing his infant body to work in overdrive to pump blood and deliver oxygen to the tissues of the body,” Dr. Austin said. “Our team was able to minimize risk and maximize time with Miles’ early diagnosis and the execution of an early treatment plan.”

According to Lauren, the entire team clearly explained what would be done with compassion and a very professional demeanor.

“We were given updates every hour and knew he was in the best hands with Dr. Austin,” she said.

A nurse provided a full explanation of everything to expect in what is now the Jennifer Lawrence Cardiac Intensive Care Unit, where Miles recovered for two days before returning to the NICU.

“It was phenomenal to see the problem-solving among his respiratory therapists, physicians, nurses, etc., to give our baby the very best care and attention,” Lauren said.

Thanks to your donations, children like Miles can recover after heart surgery in the Jennifer Lawrence Cardiac Intensive Care Unit at Norton Children’s Hospital.

After two weeks, Miles and his family headed home to Owensboro. While Miles recovered, his family was trained on how to care for him, provide his medication and watch for complications. If they had any concerns about Miles’ recovery, a team member from cardiology was available by telephone around the clock.

Miles continued to gain strength with each passing day. He hit all major milestones, including crawling and walking earlier than planned. He had routine appointments with both his cardiology team and neonatology specialists in Louisville and closer to home in Owensboro.

Around the time of Miles’ first birthday, the team decided he would need another procedure to treat pulmonary stenosis — a malfunction of the pulmonary heart valve. The condition typically doesn’t require treatment, but after further collaboration with the surgeons and cardiologists, the team decided it needed to address the condition.

With the new plan, Miles was scheduled for a second heart surgery to be performed by Dr. Austin to address the pulmonary stenosis. The surgery would take place the following summer to accommodate mom’s and dad’s teaching schedules.

The hardest part for Lauren was having to place Miles in the arms of the heart team again, even with full confidence in the team. The same nurse who cared for Miles with his first surgery provided frequent updates once again. After an eight-hour surgery, Miles was brought to recovery.

“The constant updates calmed our nerves and reinforced our trust in Dr. Austin and his team,” Lauren said. “All the doctors made a visit to see Miles during recovery. We were overwhelmed and blessed by the attention and care given to our son.”

Moving forward with a zipper and battle wounds

Today, Miles is an energetic 7-year-old eager to show his heart surgery scars. He calls them his zipper and battle wounds.

“Miles continues to grow and thrive,” said Smitha Bullock, M.D., pediatric cardiologist with Norton Children’s Heart Institute. “It is a privilege to be a part of his heart journey and hear every year during his annual cardiac follow-ups how he comes to understand it more for himself.”

“He is stronger because of his two heart surgeries,” Lauren said. “That journey is one of the beautiful stepping stones of his life.”