Ewing sarcoma is the second-most common type of malignant bone tumor that affects children and teens. Learn more about the rare disorder. 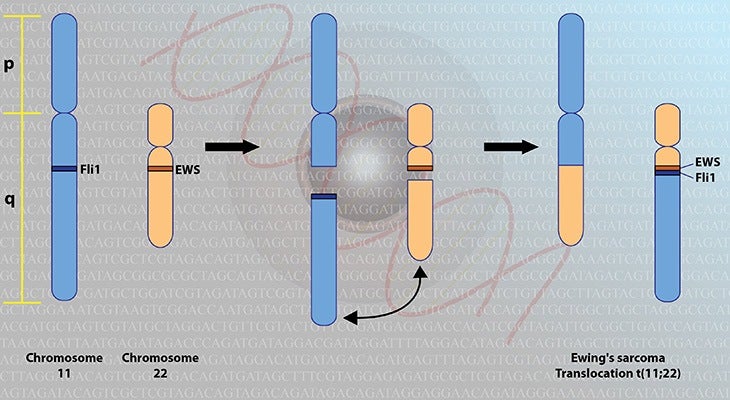 Ewing sarcoma is a type of malignant tumor that can occur in bone or soft tissue. Ewing sarcoma is the second-most common type of malignant bone tumor that affects children and young adults, ages 10 to 20 years old. Approximately 200 to 250 children and adolescents in the United States are diagnosed with a Ewing’s tumor each year. It occurs more often in boys than in girls. Ewing sarcoma is found most often in the pelvis, accounting for approximately 25% of cases, but also can be found in long bones including the femur, tibia and humerus.  About a quarter of children with Ewing sarcoma will have a metastatic condition, where the tumor has spread to other parts of the body, such as the lungs, other bones or bone marrow. Metastatic Ewing sarcoma is more difficult to treat.

The exact cause of Ewing sarcoma is unknown. However, most cases of Ewing sarcoma are characterized by a genetic change that occurs randomly after birth through a process known as reciprocal translocation between chromosomes 11 and 22. In translocation, the chromosomes 11 and 22 switch small parts of each chromosome to form an abnormal gene called EWS-FLI1 protein. At this time, the medical community doesn’t know why this translocation happens, but the abnormal gene can be found through genetic testing.

The kind of symptoms a child will experience from Ewing sarcoma will depend greatly on where the tumor is located and its size. Ewing sarcoma symptoms can appear as:

Talk to a member of our care team about advanced pediatric cancer care.

Diagnosing Ewing sarcoma early can help treatments and outcomes be more successful. Ewing sarcoma can be diagnosed by using tests such as:

Treatment for Ewing sarcoma will depend on whether the tumor is localized or if it has spread to other locations. Treatment will include chemotherapy, surgery and/or radiation, and in some rare cases, bone marrow transplant.

“Ewing sarcoma is a treatable disease, particularly if we diagnose it early and the tumor has not spread. Like many childhood and adolescent cancers, Ewing sarcoma can present with vague symptoms that can be easily overlooked or attributed to other causes,” said Natalie Slone, D.O., pediatric hematologist/oncologist with Norton Children’s Cancer Institute, affiliated with the UofL School of Medicine. “With any symptom, particularly pain in a child’s back, arms or legs, if it persists for up to two weeks, worsens over a short time, or if it wakes the child up from sleep, then I would recommend seeing a doctor urgently.”