The robots allow the procedures to be minimally invasive while dramatically reducing recovery times for children undergoing surgery, such as a pyeloplasty. 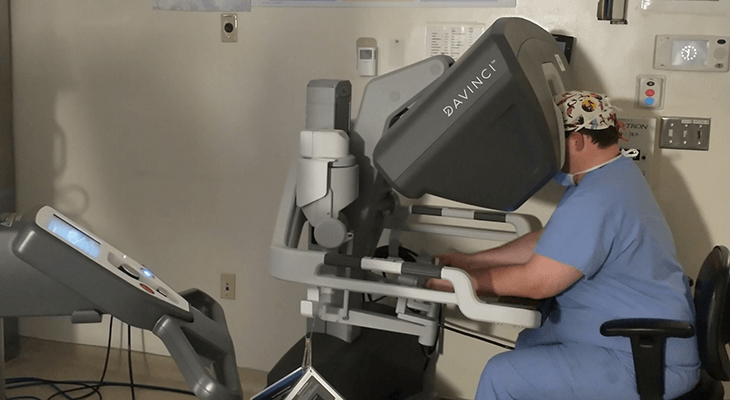 State-of-the-art robots are assisting surgeons at Norton Children’s Urology, affiliated with the UofL School of Medicine, offering minimally invasive procedures while dramatically reducing recovery times for children undergoing surgery, such as a pyeloplasty.

“Using robots for surgery is a huge benefit, and it eliminates the need for large, open incisions,” said Jeffrey T. White, M.D., pediatric urologist with Norton Children’s Urology. “The healing is significantly different.”

Norton Children’s Urology is the only pediatric robotic-assisted surgery program in Louisville, and it is one of only two programs in Kentucky using this cutting-edge technology.

Robotic-assisted surgery is similar to laparoscopic surgery — where the doctor performs the procedure using a camera and small surgical tools through several small cuts in the abdomen — except the instruments are held in place by a robot that is controlled by the surgeon.

Currently, there are seven da Vinci Xi robots across Norton Children’s and Norton Healthcare. This robot model’s vision system displays highly magnified, 3D views of the surgical area, guiding the surgeon as they move tiny surgical instruments through a console that translates their hand movements in real time.

The robots commonly are used during surgical procedures like pyeloplasty and ureteral reimplantation.

Our pediatric urology specialists provide comprehensive care for children from newborns to age 18. Speak with a member of our team today.

Pyeloplasty surgery is necessary when the ureter (the tube that connects the kidneys to the bladder) becomes too narrow or obstructed, causing urine to back up into the kidney. The procedure removes the blockage and restores the normal flow of urine.

Children who undergo robotic-assisted pyeloplasty, like the procedures performed at Norton Children’s Urology, typically make a full recovery within three to four weeks, less than half of the recovery time of a traditional open pyeloplasty surgery.

A ureteral reimplantation strengthens the connection between the kidney and the bladder by repositioning the ureter tube and reconnecting it to a different location in the bladder. The recovery time also is reduced significantly during a robot-assisted surgery, according to Dr. White.

“The robot is just a means,” he said. “The special part is the pediatrics robotics team!”