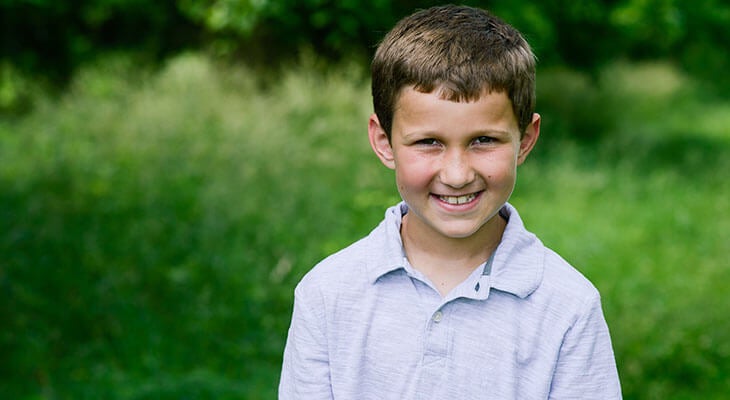 Just like any other boy his age, 9-year-old Oliver Thomas is always on the move. From fishing to swimming, riding his bike, golfing and playing baseball — he keeps busy. But Oliver, who has Type 1 diabetes, balances being an active kid with the discipline of taking responsibility for his health.

A doctor’s visit on June 13, 2015, changed the Thomas family forever. Oliver, then 6, had felt fatigued, irritable and had lost weight. He was drinking a lot of water. A test revealing sugar in his urine helped determine a Type 1 diabetes diagnosis. Type 1 diabetes is an autoimmune disease that develops when the pancreas stops producing insulin — the hormone that controls blood-sugar levels.

“He is super responsible,” said Oliver’s mother, Shawna Thomas. “He’s a little boy, but he has to be responsible.”

Oliver had to adapt to a whole new lifestyle to control his disease. He quickly had to learn about insulin, why his body needs it, how to administer his own injections and how to check his blood sugar.

“Oliver has never once said ‘I am not going to do this’ or ‘I don’t want to do this,’” Shawna said. “I think it was explained to him so well by a nurse at Norton Children’s Hospital that this is not an option — this is how you will live — and he has done it ever since our admission to the hospital.”

Oliver wears a device on his arm that manually pumps insulin into his body. Another device reads his blood sugar, providing updates every three to five minutes. He also does manual blood sugar checks, pricking his finger between six and 10 times per day. If his blood sugar gets too high, he has to gradually bring it down, checking its status every hour. Without these pricks, he runs the risk of reducing his blood sugar too fast, which could cause swelling in the brain and lead to a stroke.

“We could not be in a better place to care for him,” Shawna said.

About 200,000 children are living with Type 1 diabetes in the United States. The Thomases set out to connect with other families in the community who are affected by Type 1 diabetes. In doing so, they developed the Type 1 Club through the Children’s Hospital Foundation as a resource for support. Since 2016, the Type 1 Club has grown to more than 100 families.