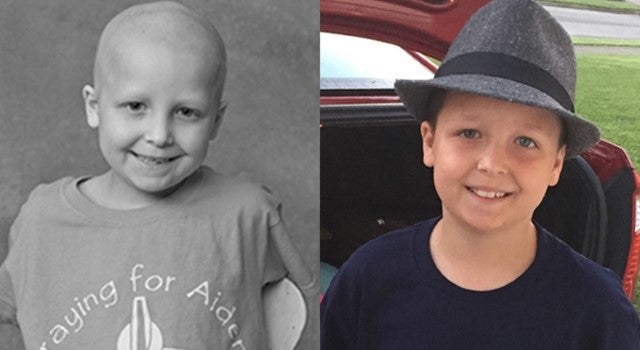 Johnson, a 12-year-old who courageously fought cancer not once, but twice, is an avid philanthropist, a master at assembling Legos and a super hero for his peers fighting cancer.

Now in remission again, he’s excited about the upcoming Chili’s Clip for Kids event and serving as the honorary chair.

“As honorary chair it means I can be the face that will encourage people to donate,” Aiden said. “I like being the face and I like sharing my story.”

Chili’s Clip for Kids is both a fundraising event and a show of support for children who may lose their hair during treatment. Aiden understands — he lost his hair a total of five times throughout his treatments.

“I remember my head would be really itchy and it made me sad when my hair began to fall out,” he said. “I dreaded being out in public because I was afraid people would make fun of me for it.”

Although he isn’t shaving or trimming his own hair this year (he shaved his head in 2016), he has assembled a team who is raising money, and several members are clipping their hair on May 21.

Team Aiden’s Legacy is a compilation of Aiden’s supporters who he has met over the years. They are hosting bakes sales, auctioning items online, doing Facebook promotions and more to raise money. According to his mom, Gena Johnson, “We are very competitive, so let the fundraising begin!”

“I personally invite everyone to join us at Fourth Street Live! on Sunday, May 21. Please consider supporting my team or forming your own team and clipping for kids,” Aiden said.