The Jackson family hadn’t expected twin boys for their second pregnancy — or congenital heart block for the youngest of the two, Walker. 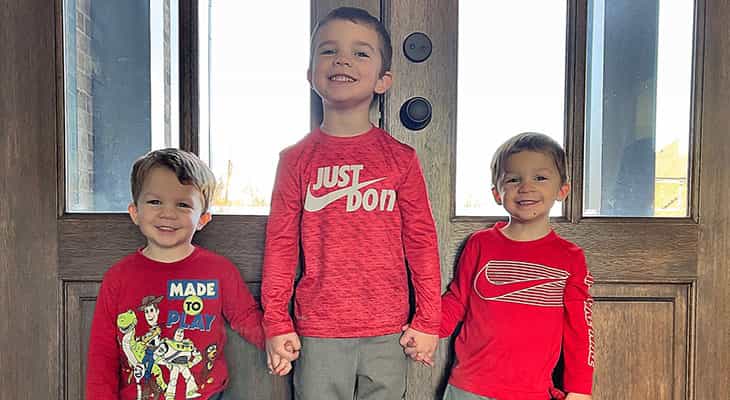 The Jackson family discovered the first surprise of their second pregnancy at their scheduled 14-week appointment: They were having twin boys. A few days before Christmas 2017, the family went for the 20-week anatomy scan, which showed the first sign that there might be a heart issue with “baby B,” their son, Walker. Already reeling from the unexpected news of a twin pregnancy, the family began their heart journey as they navigated Walker’s congenital heart block, a type of heart rhythm disorder (arrhythmia). The condition meant he would need a pacemaker.

According to Jordan Jackson, Walker’s father, during the 20-week scan conversation, the OB/GYN explained to the family that babies can experience arrhythmia from time to time. Marcy Jackson, the twins’ mom, was referred to specialists with Norton Children’s Maternal-Fetal Medicine, who have expertise when there are multiples like twins or other health concerns about mom or baby.

“We were hopeful that the arrhythmia would go away,” Jordan said.

The Jacksons worked with Jonathan W. Weeks, M.D. and Whitney E. Jamie, M.D., both specialist physicians with Norton Children’s Maternal-Fetal Medicine. During the Jacksons’ appointment in January 2018, they learned from Dr. Weeks that there likely was a heart issue.

“Dr. Weeks explained that when you see twin A’s heart rate at 150 to 160 and then twin B’s is at 65, you know that there’s something going on in his heart,” Jordan said. “He told us that it was likely not structural and probably more of an electrical issue, and that we needed to see a cardiologist with Norton Children’s Heart Institute.”

Jyothi Matta, M.D., pediatric cardiologist with Norton Children’s Heart Institute, affiliated with the UofL School of Medicine, confirmed Walker’s diagnosis: congenital third-degree heart block. Congenital heart block, also called atrioventricular (AV) block, is an interference of the electrical nerve impulses (conduction) system that regulates the heart’s pumping action. AV block prevents the electrical signals originating in the atria (upper chambers of the heart) from reaching the ventricles (lower parts of the heart). This can slow or interrupt the heartbeat and can make it difficult to pump blood to the rest of the body. Congenital AV block can be first-, second-, or third-degree. Third-degree heart block is when no electrical signal goes into the ventricles.

For the rest of the pregnancy, Marcy was closely monitored by the maternal-fetal medicine and fetal cardiology teams. While Wesley, or “baby A,” and Walker both were developing well, Walker’s heart rate was concerning to the teams as they considered whether an emergency delivery would be needed.

“Every appointment was really nerve wracking. We were seen twice weekly, usually Mondays and Thursdays. The teams were monitoring his heart rate, watching to see if it dropped into the 50s, which can be indicative of heart failure,” Jordan said. “We would go and his heart rate would be hovering in the mid- to upper 60s, and we would just have this overwhelming feeling of relief.”

Like many children whose congenital heart defects are found before birth, the twins were delivered via a planned cesarean section (C-section). This allows for a total coordination of care from the various Norton Children’s teams to provide the baby the care needed immediately upon birth. Ahead of delivery, the Jacksons met with the team that would be on hand for the twins’ birth. The specialists included Jonathan R. Malowitz, M.D., pediatric neonatologist with Norton Children’s Neonatology, affiliated with the UofL School of Medicine; and Erle H. Austin III, M.D., pediatric cardiothoracic surgeon with Norton Children’s Heart Institute.

“Our team was honest and upfront about what could happen and helped to set expectations for delivery,” Jordan said. “We were prepared that we may not be able to hold Walker, and that should Walker’s heart rate drop after birth, he may need to go immediately to surgery for a temporary pacemaker to be placed.”

The Jackson twins were born in April 2018 at 37 weeks. Wesley was born first, with Walker soon following.

Walker’s heart rate was his “normal,” in the mid- to upper 60s, so the Jacksons got to spend some time with both twins, before Walker was taken to the neonatal intensive care unit (NICU). The Jacksons couldn’t hold Walker again in the first 36 hours, as he was adjusting to life outside of his mother. After two days in the NICU, the pediatric cardiologist cleared Walker to go home. However, he was still feeding poorly and had not gained weight. The team was focused on getting Walker to eat well and gain weight so that when he went home, the family would need to be concerned only with monitoring his heart.

While the family was prepared to go home without Walker, it still did not make it any easier. Walker had to stay in the NICU for nearly a week before being cleared to go home with a 30-day event recorder to monitor his heart rhythm to see if there were any significant changes after he went home.

“While the NICU stay was only six days, and from a heart perspective, he was good after two days, but we just felt this the sense of relief that now we’re all home together for the first time. And so the journey begins, right? Not just Walker’s heart journey, but this twin journey, too,” Jordan said.

Doctors used the initial 30-day monitor, as well as other monitors of various duration, to collect data on Walker’s heart. According to Jordan, they were creating the baseline set of data that showed Walker’s average heart rate, his lowest heart rate and his maximum while using the monitors. His cardiologists were looking for trends, and should Walker’s heart rate trend lower, they would need to begin thinking about surgery to place a pacemaker. The heart team and the Jacksons knew he would need pacemaker surgery; it was just a matter of when.

In November 2018, they went to the cardiologist’s office for a follow-up. The event recorder (Holter monitor) showed that Walker’s lowest heart rate had dropped as low as 45 beats per minute, but the average was much higher.

“The cardiologist said he would be comfortable going another two to three months between the Holter monitors, as Walker had been doing so well, but he believed his heart rate was going to continue to decrease,” Jordan said. “Much like with the scheduled C-section, they would rather plan for surgery on our terms, to try to control it versus doing it as an urgent or emergency situation.”

“Dr. Kozik was extremely helpful in explaining his surgery and how noninvasive and how routine of a heart surgery it is,” Jordan said. “She expected it to be two to three hours.”

After the surgery started, the Jacksons were told someone would come in every 30 minutes to the waiting room to inform them about how the surgery progressed. According to Jordan, that included keeping the family informed if the doctors found that Walker’s chest cavity wasn’t large enough for the pacemaker model they hoped for and if they had to make some adjustments in the plan. It had only been an hour before a representative from the pacemaker manufacturer came in to talk to the family and share the good news — the pacemaker was successfully implanted. They explained that Walker’s chest cavity was big enough to get the Bluetooth model pacemaker which has a lot more battery life and other advanced technology, according to Jordan.

“Dr. Kozik said that he did beautifully; he was perfect,” Jordan said. “I joked and said, ‘I’m assuming it went well — it only took 45 minutes!’”

Walker then went to the pediatric intensive care unit (PICU) for his post-surgery care.

“When we finally got into the PICU, he was asleep,” Jordan said. “The first thing I did was look straight at that monitor and follow his heart rate at 143. For the first time in his short life, his heart was beating like his twin brother’s. It was just this overwhelming relief that his body is functioning completely normal now. In just a few hours, he was sitting up, and playing with his toys and flirting with all the nurses.”

According to the family, Walker is a thriving boy who likes to test his limits and roughhouse with his two brothers. Jordan has an app on his phone that they now place close to Walker’s pacemaker once every 3 months, which sends data to the Norton Children’s Heart Institute electrophysiology team, including Christopher L. Johnsrude, M.D., pediatric cardiologist, and Barbara Russell, RNC, nurse clinician. This remote monitoring allows the electrophysiology team to check in with the Jacksons on Walker’s current health as well as the health of the pacemaker.

“Barbara calls us and updates us on the estimated remaining battery life, status of the wiring and if they see any arrhythmias,” Jordan said. “So, that’s the routine and hopefully the long plan for now — the goal is to have this pacemaker last until he is big enough that they can do an transvenous placement of a regular adult pacemaker.”

Walker will continue to do yearly heart checkups with Dr. Johnsrude, including an electrocardiogram.

Wesley and Walker are turning 3 in April 2021. According to Jordan, the family has learned a lot with Walker’s heart journey, but the most important thing is to find your support system.

“Obviously, reach out to friends and family for support,” Jordan said. “But if you can, find support with other families facing similar diagnoses. It’s one thing to share that you’re nervous about a procedure with a loved one, but if you can share with someone who relates to you and has been there and can share in those wins and empathize, that’s invaluable for parents going through something like this.”