Anna, Reece and Trey weighed less than 3 pounds each. The triplets’ tiny diapers were the size of a Kleenex, and their little hats were no larger than an orange. 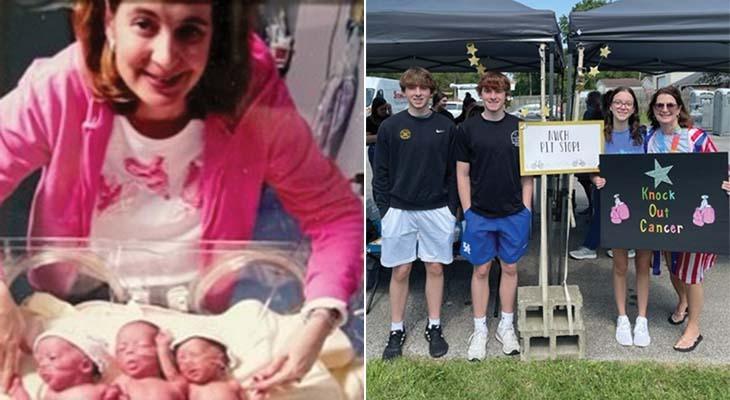 Maria Mozzali was at her doctor’s office for a routine checkup. The expectant mom, pregnant with triplets, was having her babies’ heart rate checked when the provider noticed something was wrong. The smallest baby’s heart rate was too low, and Maria would need an emergency cesarean section.

Within a few hours, two boys and a girl were born 10 weeks prematurely on Feb. 10, 2005. Anna, Reece and Trey weighed less than 3 pounds each. Their tiny diapers were the size of a Kleenex, and their little hats were no larger than an orange.

For nearly two months, the babies were cared for in the neonatal intensive care (NICU) unit at what is now Norton Women’s & Children’s Hospital.

“It’s super scary for parents when they’re that early, because there are a lot of major things that can go wrong,” said Maria. “It was so stressful, but the staff was just so amazing.”

The babies were not born with any major health issues; they were “feeders and growers,” who just needed more time to gain weight and learn how to eat. Maria had been under the care of maternal-fetal medicine physician Jonathan W. Weeks, M.D., who specializes in complex pregnancies, including multiple gestations like triplets.

Norton Children’s Neonatology, affiliated with the UofL School of Medicine

“She saved their lives, but she also saved my life, too, because it was so stressful and I was so nervous,” Maria said. “Charlotte, the nurses and the social workers not only took care of the babies, but they took such good care of me.”

The triplets are now sophomores in high school in Louisville. Reece and Trey attend St. Xavier and Anna attends Assumption. They plan to go to college after graduation, and Anna wants to be a pediatric physical therapist.

For Maria, her positive experience at Norton Women’s & Children’s Hospital inspired her to return for a career. She currently serves as department secretary in the hospital’s nursing administration.

Each year, the family is involved in events that support the Norton Children’s Hospital Foundation. Maria wanted to teach her triplets the importance of giving back after so many people supported their journey more than 17 years ago.

“I’m just so grateful and blessed we got the care that we did,” she said.