What is Treacher Collins syndrome? Ask an 11-year-old

What is Treacher Collins syndrome? Ask an 11-year-old 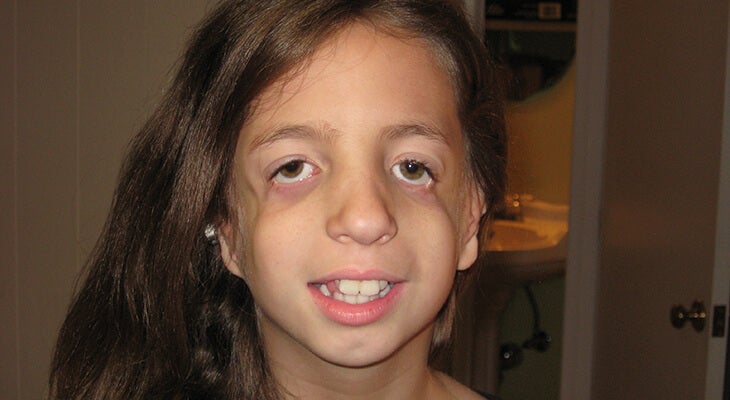 Victoria Dicken is no stranger to challenges. The 11-year-old girl from Louisville has Treacher Collins syndrome.

Treacher Collins syndrome is a rare genetic condition that affects the development of bones and other tissues in the face. Most people with the condition have underdeveloped facial bones, particularly cheek bones, and a very small jaw and chin.

Victoria was born without fully formed ears. She had no openings and extreme hearing loss. Mark Chariker, M.D., chief of plastic surgery at Norton Children’s Hospital and a team of specialists with Norton Children’s Neurosurgery have performed dozens of operations to help shape her ears.

“It’s a challenging condition to treat,” Dr. Chariker said. “Treacher Collins not only can impact hearing, but also breathing and sight.”

Surgeons and the entire team around them care for kids with disorders affecting the nervous system and skull, including traumatic injury, brain tumors, epilepsy and more.

Dana Dicken, Victoria’s mom, recalled when her daughter was diagnosed moments after she was born.

“As a parent in that situation, you just don’t know what to do,” she said. “You take it day-by-day, moment-by-moment.”

A rarely talked about disease, Treacher Collins syndrome recently has become a topic of national conversation. It’s thanks to the movie “Wonder,” in which the main character has the condition.

Dr. Chariker treats only a couple Treacher Collins patients — one in 50,000 babies are born with the condition — but sees hundreds of kids with other craniofacial deformities every year. He hopes the movie will get more people talking and create a better understanding of what his patients deal with.

“This helps open up an insight to what these children go through,” he said. “They’re quite inspirational in how they confront problems in life and day-to-day things we take for granted, such as our appearance.”

Victoria said she’s used to people staring and asking questions, but she’s not bothered. She plays basketball and soccer and has lots of friends. In fact, she and her class went to watch “Wonder” together.

“I’m fine with being different,” she said. “Even if the times are hard you have to keep your head high.”

Dana admits life has taken some unusual turns since Victoria’s diagnosis, but she’s grateful for everyone who has cared for daughter.

“There truly are no words for all the doctors, nurses and other medical personnel who have given Victoria the chance of a normal life,” she said. “Dr. Chariker is so talented and compassionate — we would not have gotten through the years without his support and caring ways. He’s a true human being who obviously loves his job but probably does not realize just what a positive impact he has had on our family, especially with Victoria.”