To the physicians who saved my son

To the physicians who saved my son

A mother’s letter about Drs. Austin and Holland, fathers who sacrifice for thousands of kids. 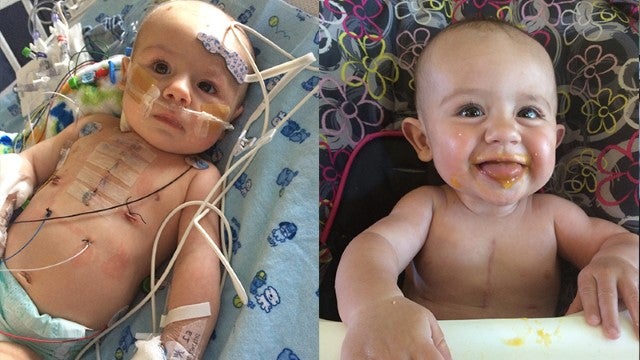 I’ve thought about writing this letter about a million times since March. Now that things have settled down and Miles is thriving, I feel like I can finally gather my thoughts and attempt to put into words just how much two physicians have impacted mine and my family’s life.

A week before Miles’ open heart surgery, we had a pre-op visit with Dr. Erle Austin, and he was late. He was called into an emergency surgery and his patients were left to wait, myself included, for an unspecified amount of time while he likely saved someone’s life.

As I was sitting there, it dawned on me — the sacrifices that he makes on a daily basis. I wondered if he had a family; how often they were probably let down because, once again, dad was on call; how many dinners his wife ate alone because her husband had to rush off to the hospital.

I thought about all of the sacrifices he had and continues to make for his profession. How saving someone’s life has become just another day at the office for him.

When we met with him an hour after our appointment time, he was so nonchalant about his surgery. I think he could see the worry on my face, and he comforted me by telling me how often he does this surgery, and that this surgery has been performed for decades.

I have never used the word “hero” to describe someone in my life, but Dr. Austin is hands-down a hero. I am so thankful that he sacrificed his early 20s to pursue a dream. A dream that requires 100 percent of his own heart. A dream that didn’t consist of a 9 to 5, home every weekend schedule.

Miles spent 10 days in the hospital and do you know who was there every morning to check on him? Dr. Austin and Dr. Brian Holland. They shared our joy when Miles’ heart started fully beating on its own, and his pacemaker was removed. They shared our disappointment when he left after eight days, only to return the next day with a virus. When alarms were going off, they ran tests at 2 a.m. to make sure he was okay. They covered all of the bases and they cared for him as if he were their own. I will sing their praises until my last breath.

The beginning of our story …

It started when I was pregnant with my second child, Miles. A routine anatomy scan, turned into a fetal specialist referral that turned into several fetal echo appointments and sent my son into the care of Dr. Holland, a pediatric cardiologist at Norton Children’s Hospital and University of Louisville Physicians. For months, I endured long, uncomfortable fetal echoes in an attempt to determine if something was wrong with Miles’ heart, and if so, what it was.

Up until 2 weeks before Miles was born, it was a mystery. It was hard to get a good, clear picture of his heart.

I had one last echo scheduled to try again for a good image. It’s ironic because I almost didn’t go to that appointment. This was the first appointment that I wasn’t expecting an answer. I never got one at any of the others, and I was expecting the same outcome for this appointment.

Once again, the technician was unable to get the images, and Dr. Holland tried to get them himself. He left the room to review everything and came back in with (finally) an answer! Tetralogy of Fallot. I had no idea what this meant, but he drew pictures and wrote out details.

Tetralogy of Fallot (TOF) meant that he had not one, but four issues with his heart: a hole; the aorta lying over the hole; an obstruction from the heart to the lungs; and a thick muscle wall. This diagnosis required, at minimum, one open heart surgery. Not the answer that I was hoping for. I kept it together in the office, with the knot in my throat on fire. I cried when I got to my car. This diagnosis took the excitement out of Miles’ birthday and replaced it with dread.

Miles was born on Oct. 23, 2015, the same day as his big sister’s birthday! We were overjoyed that he was born PINK. His oxygen levels? 100. He was a healthy 8 pounds, 3 ounces and 19.5” long. He had no other health problems. There was an entire heart team in the room as he was delivered, ready to jump in, and I am happy to report that they weren’t really needed.

The first echo showed Miles did NOT have TOF, the hole in his heart would most likely heal itself and he would not need surgery. I can’t tell you how happy we were. But that exciting news was short lived.

Dr. Holland performed a second when Miles was a week old and determined that Miles’ hole would not heal itself. He was confident that Miles would require open heart surgery in the first six months, however, the TOF story was still not clear. Since Miles was doing so well, we planned his surgery for May, once we were out of cold and flu season.

Miles showed no symptoms in the first two months, other than a heart murmur, but then he started to show other symptoms. His growth slowed down almost completely, with him only gaining a few ounces in a month. He became very tired all the time and couldn’t finish a nursing session without falling asleep. He began to nurse every hour for just a few minutes, and then would fall asleep. His heart was always pounding through his chest. He had retractions all the time. He was diagnosed with congestive heart failure. He was put on Lasix to see if that would temporarily resolve the issues, but it didn’t.

Miles’ surgery was scheduled for March 11. Part of his surgery was determining whether or not he had TOF, or just a ventricular septal defect (a VSD – the hole). Even at four months old, we still weren’t sure what the future held for him – if he would need multiple surgeries, or just one.

I often think about the period where Miles started to show symptoms, and I wonder if I would have noticed if Miles wasn’t diagnosed. I don’t think I would’ve noticed had Dr. Holland not prepared me to look for the signs. And I wonder what would’ve had to happen for me to notice?

Dr. Austin performed Miles’ surgery and discovered he does not have TOF. He only had the VSD and it is not expected that he will need any more surgeries.

I see my son now, bearing the scar of their work and absolutely thriving. He said his first word yesterday, and took his first swim just last week. It is because of Dr. Austin and Dr. Holland that he is able to do these things: That his quality of life is that of a normal 7 month old, that he is not restricted; he is not tired; he is not having congestive heart failure; that he will live to see his first birthday; that his life expectancy is just four years short of a healthy baby.

I also have to thank all of the dedicated nurses, therapists and technicians who cared for him throughout our stay. The ones who made sure not only that Miles was okay, but that I was okay. One nurse in particular, encouraged me to leave the room and get some air while he was still sedated. “We are the most qualified babysitters,” she told me. I could hug her for that push to not forget about myself. It was exhausting; it was hard; it was emotional; it was so many emotions wrapped up into 10 days, and I would do it all over again for Miles.