‘How do you tell a 3-year-old they have cancer?’

‘How do you tell a 3-year-old they have cancer?’

Patient’s dad opens up about the realities of cancer 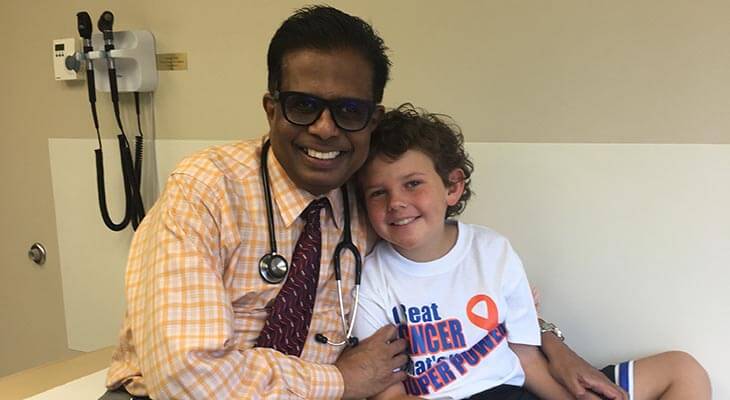 No parent is prepared to hear their child has cancer. Josh Collins opens up about his experience after receiving the toughest news.

The silence was deafening as the early summer day wound down. Finally, all three boys had been put to bed, allowing my wife and I the opportunity to put our feet up and discuss the day we had, plan for the days ahead or to take a cat nap before turning in ourselves for the night. But none of these normal things were happening.

We both sat up on the couch.

Not uttering any words.

Staring at our phones.

After a couple of minutes, we both leaned in and offered the other a look at what the other was checking out. We were doing the same thing that all concerned parents do at one time or another: searching symptoms for a quick internet diagnosis. We were on totally different sites, but one big scary word was at the top of both lists. Neither of us dared to say it.

For two or three weeks our 3-year-old son, Logan, had been carrying an on-again/off-again fever, leg aches that we could dismiss as growing pains, and some bruising — but what rough-and-tumble 3-year-old doesn’t have some bruises on their legs?

Logan refused to get lost in the shuffle

Laura and I weren’t prepared for Logan. Our parenting was on cruise control. Our twins, Marcus and Caleb, were well-balanced, well-mannered, good decision-making young fellas — 10 years older than Logan also!

Help us fight childhood cancer. Become a Hero for Kids by making a monthly donation to Norton Children’s Cancer Institute.

Logan’s personality and demeanor differ from the twins slightly. I will always remember, late in her pregnancy with Logan, Laura saying, “There is a party going on in my belly!” This was a small indicator to prepare us. Since his birth, his spirited attitude and zeal for life has served him well. He refused to get lost in the shuffle of active teenage boys or busy work schedules.

That’s why we grew more concerned when Logan was asking to go inside to play, or for momma to carry him from station to station on the playground. That big word was still looming, but not spoken.

The silence is broken

On Friday, June 6, 2014, the silence was broken with the words: Acute lymphoblastic leukemia.

Our worst fears were now our reality. In a small exam room downtown, he sat looking out the window for ambulances and fire trucks, oblivious to the fact that his normal life was over. Immediately we were whisked away through a maze of hallways and skywalks, and when the elevator doors opened to Addison Jo Blair Cancer Care Center on the wall, my knees literally buckled.

My wife built Logan a fort made of hospital sheets. No medicine or doctors were allowed in there. I think Laura and I wanted to crawl in more than he did. I still can hear his little voice saying, “But I’m all full of medicine!” How do you tell a 3-year-old they have cancer? We never made it that far in the discussion with him. We just kept reinforcing that these people are here to help you. The things we are doing are out of love.

His acute leukemia was met with acute treatment. Every blood cell in his body was to be destroyed. For two weeks we stayed at Norton Children’s Hospital surrounded by family and friends. I was so proud of Logan while he was held captive on 7 West. He was a flood light in a dark hallway, dragging his IV pump around like it was his friend from preschool. Doctors, nurses and even the cleaning crew loved seeing Logan high-stepping the hallways of a somewhat solemn wing of the hospital where parents are often caught crying in the coffee room.

Logan is in remission now! He recently finished a three-year marathon treatment plan that consisted of more pills, port accesses and blood tests than we care to count.

We are so excited that Logan may now realize a normal life of a 6-year-old doesn’t consist of daily chemotherapy pills and monthly visits to a hematology/oncology clinic.