'It doesn’t matter how bad things are, it always gets better.' 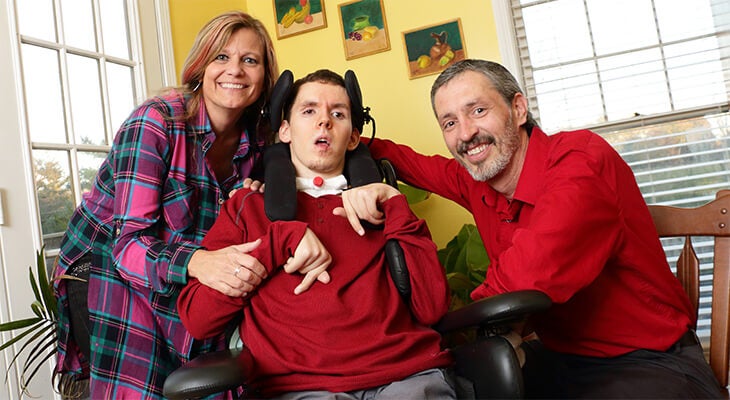 On Nov. 6, 2008, Norton Healthcare employee Casey Phillips got the call no parent ever wants to receive. It was his father-in-law telling him he needed to get to the Shelbyville emergency room as fast as he could. His 14-year-old had tried to hang himself.

“My heart stopped,” Phillips said. “As I was walking out the door, I couldn’t do anything except pray. I had to pick up my wife. We had to get to Shelbyville. I cried and prayed all the way to her office. I asked God if Robbie was alive. I heard, ‘Yes,’ like a whisper.”

Phillips and his wife, Debbie, arrived in Shelbyville minutes before the helicopter came to transport Robbie to Norton Children’s Hospital. Robbie had an anoxic brain injury, and doctors warned of a strong possibility that Robbie wouldn’t make it through the night. If he did survive, he would be left in a vegetative state.

Robbie survived the night, and spent six weeks in the hospital and three more at Frazier Rehab Institute.

“Robbie opened his eyes seven days after our arrival at Norton Children’s Hospital,” Phillips said. “They saved his life.”

Phillips describes Robbie as a very intelligent, quiet and caring kid who loved his family and his pets. He recalls memories from a family vacation just five months before his son’s attempted suicide, where Robbie and his sister, Serena, swam with dolphins. He talks about the many car shows they went to together and that Robbie liked to fish.

That day eight years ago changed everything for the Phillips family. Although Robbie survived, he is 100 percent dependent on his family for care. He can’t communicate and requires a feeding tube, trachea care, medication schedules, bathing and range of motion exercises. The family’s dining room became a hospital room, and Debbie left her job to assume the role of Dr. Mom.

“It has been difficult,” Phillips said. “It changed us. We hold on to our faith and continue to fight for our son.”

That fight led them to seek alternative treatments for Robbie in an effort to improve his condition. In 2011, the family began to explore stem cell research as a way to heal his brain injury; however, most treatments were risky due to his poor health.

A few months into their search, hope came from an unlikely place: Robbie’s grandparents’ dog was undergoing autologous adipose stem cell treatment for hip dysplasia at a veterinary clinic in Shelby County. Soon after treatment, the dog began to walk again.

When they told the veterinarian about their grandson’s condition, he suggested researching this type of stem cell treatment for Robbie because it uses the person’s own fat cells to generate new stem cells, making it lower risk.

The family found a reputable facility that performed autologous adipose stem cell treatment in Phoenix, Arizona. The next hurdle was finding a way to pay for $8,200 experimental treatments, plus travel, lodging and additional nursing support. There was no doubt the family would make the trip in an effort to help Robbie. The question was how to get over that hurdle.

If you or a loved one is struggling with depression or thoughts of suicide, speak up and seek out help.

“A close friend suggested we have a music benefit concert to raise money,” Phillips said. “We called the event RobFest.”

Encouraged by overwhelming support from the community, Phillips was determined to spread hope to teens facing thoughts of suicide.

“Helping those in need is a great feeling, and we wanted to do more to prevent another death by suicide,” Phillips said.

Money raised from RobFest helps support ASAP (Adolescent Suicide Awareness Prevention), a charity Phillips started with the help of a close family friend. The small group has been mighty in their efforts to support teens like Robbie who feel suicide is the only answer. ASAP has provided a scholarship to a teen who submitted an essay on her battle with depression and suicide attempt. It also assisted with burial costs for a teen who had died by suicide. Other funds raised by the organization are spent on educating the public about bullying and teen suicide.

Through his faith, family and support of his community, Phillips has turned tragedy into purpose.

“I want people to realize that it doesn’t matter how bad things are, it always gets better. Just live. Never give up,” he said.