Sunshine on a cloudy day

Sunshine on a cloudy day 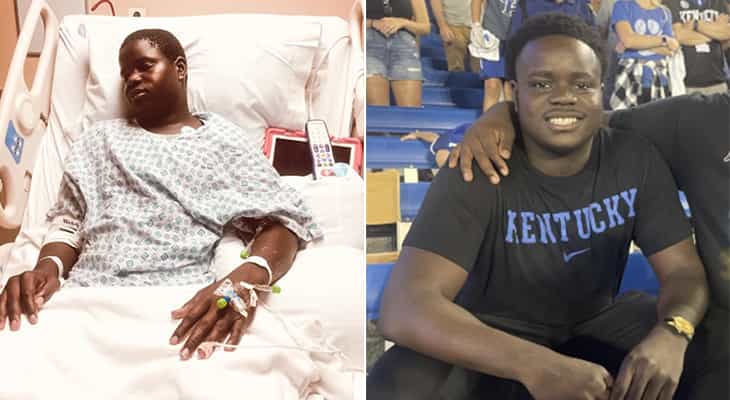 Determined to one day be a dual-certified general and orthopedic surgeon, Said completed 21 hours of prerequisites through a dual-credit program at Butler Traditional High School his senior year so he could start classes in his major, biology, immediately.

What makes his achievements especially remarkable is that, as a 16-year-old high school sophomore, he was diagnosed with stage 4 embryonal rhabdomyosarcoma, a soft-tissue tumorous cancer that forms from embryonic skeletal muscle tissue.

“I was at the doctor getting my sports physical before basketball tryouts when she found a tumor and sent me straight to Norton Children’s,” Said said. “Within a couple of weeks, we had a treatment plan that would mean 52 weeks of chemo and radiation.”

Said finished his treatment in October 2019, but he still required maintenance therapy through May 2020.

“I was declared in remission on May 15,” Said said. “That’s like a new birthday to celebrate.”

Those who know Said understand that he is a natural celebrator who finds the positive side to nearly every situation he encounters.

Even through months-long stays in the hospital, Said found a way to stay in the light with help from the Norton Children’s staff.

“Everything changed around December,” he said. “Nurse Sarah encouraged me to get out of my room and visit the nurses’ station because I’d basically just been on my phone for two months. I did and started talking to everybody. There were such good vibes there. They were filled with positivity and laughter. That inspired me and became my routine from December to October of the next year.”

In addition to the nursing team, Said drew inspiration from his team of physicians, especially Kerry K. McGowan, M.D., a hematology/oncology specialist with Norton Children’s Cancer Institute, affiliated with the UofL School of Medicine.

“I really tried to take the best care of my health, do additional research on areas of interest and be especially on top of things,” Said said. “I tried to be the best patient I could be to make Dr. McGowan’s — and the whole team’s — life easier. I try to shed light in what could be a dark environment.”

Not many teenage patients worry about worrying their care team, but Said is not like many teenagers.

Putting his mind where his mouth is

Said recognizes that cancer has changed him, but in a surprising way.

“It has matured me. I think before I act. I analyze situations before I make a decision.

“Being around the nurses and doctors so much helped me start to think on a higher level. Now, instead of thinking, ‘It’s me on this earth,’ I think, ‘How can I affect and help the people around me on this earth?’ You never know what someone else is going through.”

Said believes cancer also has made him an even more positive person. His social media features daily reminders for his followers to “say or do something nice today.” He is a believer in the impact of a smile from a stranger.

When asked to recall the most difficult parts of his cancer journey, Said had very little to say.

“I never looked at it as a curse. I try to live and encourage others to live in the good of every moment. I never want to look back at the negatives. I only remind myself of the positives.”