Stories of service: Breaking down barriers

Stories of service: Breaking down barriers 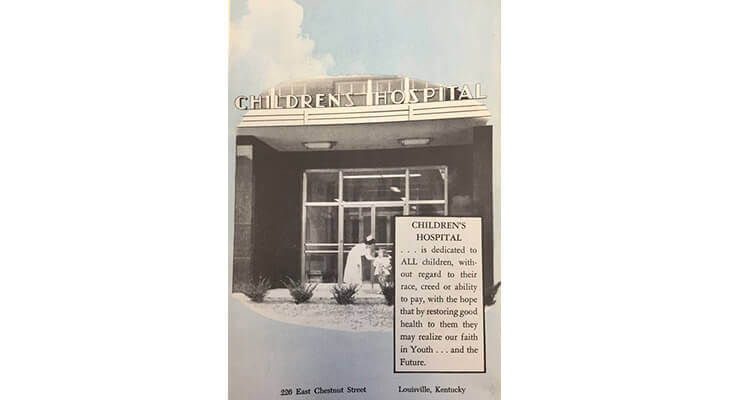 Did you know that Norton Children’s Hospital was the nation’s second site to perform an infant heart transplant … or that the hospital was founded on the heels of the deadliest tornado in Louisville’s history? You can learn about the hospital’s 125-year history by visiting “Hope and Healing: Celebrating 125 Years of Norton Children’s Hospital” at the Frazier History Museum.

The 4,200-square-foot exhibit explores how the hospital has served the community in good times and in bad, all the while shaping the evolution and innovation of care for children and families. We are exploring the history on display at the Frazier in a series called “Stories of service.”

African-American children were in grave need of care during the hospital’s early years as racial tensions mounted within the community that was helping to fund the hospital. Although the hospital had no racial exclusion rules, some children whose families could not pay were turned away.

RELATED: Video: Inside Norton Children’s exhibit at the Frazier

By 1947, physicians demanded barriers be dropped on who could be cared for in the hospital. In 1951, the Children’s Hospital became the first nongovernmental hospital in Louisville to desegregate. This came on the heels of an incident in which three African Americans were denied care at a Hardinsburg hospital after being injured in an auto accident. One died in the waiting room. The event prompted 10,000 Louisvillians to sign a petition and 200 to march in Frankfort in support of a state law that would prohibit hospitals from denying emergency treatment to anyone.

About the Frazier History Museum

The Frazier History Museum is located at 829 W. Main St. on Louisville’s downtown “Museum Row.” The Frazier is where the world meets Kentucky, bringing history to life for visitors through exhibits, artifacts and live performances every day. The Frazier is open Monday through Saturday, 9 a.m. to 5 p.m., and Sunday, noon to 5 p.m. For more information, call (502) 753-5663. or visit FrazierMuseum.org.