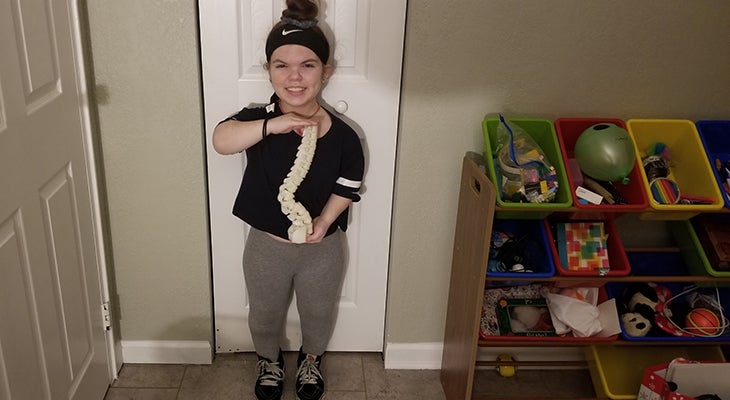 An innovative surgery using 3D printing technology is alleviating pain for some of the most critical and complicated cases. A 13-year-old girl from Clarksville, Indiana is one of those cases.

Haley Kessinger was born with achondroplasia, a common form of dwarfism, as well as a deformity in her spine. As Haley got older, the curve became worse, putting pressure on her hips and impacting her ability to walk.

“I was in a lot of pain and didn’t really want to move much,” Haley said.

And it was getting worse. That’s when Haley went to see Kent L. Walker, D.O., orthopedic surgeon with Norton Children’s Orthopedics of Louisville.

“Haley’s condition was very severe,” Dr. Walker said. “If left untreated, she would have eventually become paralyzed from with waist down.”

The next step was surgery to fix the spine, but this was far from an ordinary procedure.

“This was an extremely complex case,” Dr. Walker said. “And when you’re dealing the spine, you have to be very precise.”

Due to the complexity of Haley’s case, Dr. Walker used new technology that converts computed tomography (CT) images of a patient’s spine into digital files that can be printed using a 3D printer. He printed an exact replica of Haley’s spine and created custom-made drill guides for each of her affected vertebra

“The result of the 3D printed models and guides is increased accuracy and increased safety putting those screws in,” Dr. Walker said. “Having the ability to practice before the procedure makes the surgery safer and more effective.”

“It was probably one of the largest spine surgeries in America that day,” Dr. Walker said. “And it went very well.”

The surgery helped straighten Haley’s spine, making her a few inches taller. The surgery also better balance her spine so she can walk and sit more comfortably.

“It used to hurt when I walked. But now it just feels normal,” Haley said. “I was so scared that I would become paralyzed and now I don’t worry about that anymore.”

Spine model a symbol of triumph

Dr. Walker gave Haley the 3D spine model he used for her surgery. She’s keeping it as a reminder of how far she’s come.

“It (the model) shows that I’ve overcome a lot,” Haley said. “Now I can focus on doing things I enjoy and just being a normal teen.”