After their first child received a new, lifesaving treatment for spinal muscular atrophy (SMA), Alex and Aaron Haas of Paducah, Kentucky, were prepared in case their second child had inherited the same genetic disease. 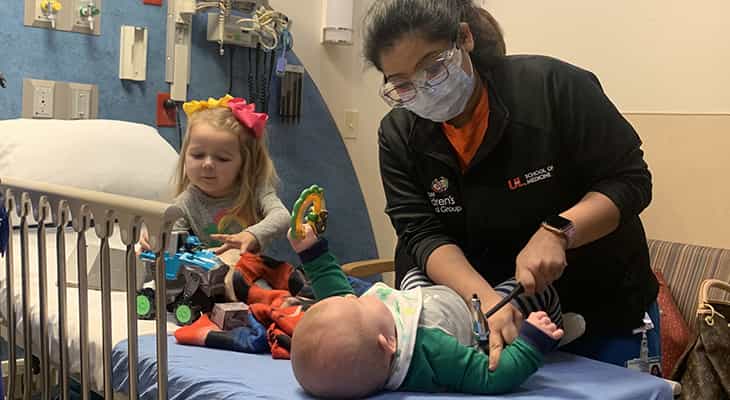 Alex and Aaron Haas had heard of spinal muscular atrophy (SMA) — a former neighbor of Aaron’s had a grandchild who died from it — but didn’t know much about it when 3-month-old Riley seemed less active than a family friend’s baby of the same age. A small knot in the back of Riley’s neck was enough to prompt an urgent call to the family’s pediatrician.

The pediatrician agreed Riley needed further evaluation and sent her to Norton Children’s Outpatient Center – Paducah, with a referral to a neurology specialist with Norton Children’s Neuroscience Institute, affiliated with the UofL School of Medicine.

The exam showed Riley was extremely weak, and the small knot appeared to be a result of restricted head movement. The neurology specialist suggested the possibility of SMA. The condition causes the progressive loss of motor neurons, which carry signals from the spinal cord to muscles. With the gradual loss of the neurons, a child loses the ability to breathe, eat, sit, crawl, stand and keep the spine straight. SMA does not affect learning or cognitive function in children.

SMA affects about 1 in 11,000 births and is a leading genetic cause of death for infants.

“Our bodies need a protein called SMN protein or ‘survival of motor neuron protein’ to keep motor neurons healthy and alive,” said Arpita Lakhotia, M.D., child neurologist with Norton Children’s Neuroscience Institute. “This protein is made by a gene called SMN1. Most of us have at least one working copy of this SMN1 gene, which makes the SMN protein and helps motor neurons stay healthy.”

Patients with SMA either don’t have both copies of the SMN1 gene or the genes have mutated and aren’t functional.

After bloodwork for genetic testing that typically takes two weeks, Alex was contacted two days later to come in for an appointment.

“My first thought was, ‘Oh, it means they did not find anything due to the quick turnaround,’” she said.

But both the local pediatrician and the specialist were there when the family arrived, increasing their concern. Because of the need to start treatment of SMA right away, the symptoms were enough to rush the test.

“Our hearts were shattered, but we knew we could not be weak,” Alex said. “Riley was staring at us with her big, brown eyes and smiling with no knowledge or understanding of this diagnosis. She made us stronger. We were ready to fight this disease.”

After arriving in Louisville to meet with the team at Norton Children’s Neuroscience Institute, Alex and Aaron were asked if they were interested in starting a new drug, nusinersen, sold under the brand name Spinraza, that halts the progression of the disease. Any lost motor neurons can’t be restored, and Riley now uses a wheelchair to get around.

The Food and Drug Administration had approved the drug only months earlier. Alex and Aaron jumped at the chance to start the treatment, and Riley got the first of four initial injections via lumbar punctures less than two weeks later. Riley will need a maintenance dose every four months for the rest of her life.

The drug forces production of the functional SMN protein to save the motor neurons Riley still has. She was the youngest SMA patient at Norton Children’s Hospital treated with Spinraza.

“This was new territory due to Riley’s early diagnosis and response to treatment,” said Nemr S. Eid, M.D., pediatric pulmonologist with Norton Children’s Pulmonology, affiliated with the UofL School of Medicine. “Typically if an infant or a child with SMA has delayed diagnosis, they may need a tracheotomy and feeding tube to survive.”

“Riley had so much promise since she was not the typical SMA case — she was unique with so much hope,” Dr. Eid said.

“Quick diagnosis and treatment made a world of difference for Riley in eliminating the progression of the disease. If we would have waited another week, there’s no telling what would have happened,” Alex said.

Addition of a sibling … and another diagnosis

When Alex found out she was pregnant with Shepard a couple years later, Alex and Aaron opted to test in utero to best prepare for his first few weeks of life and promptly halt the effects of SMA if he had it.

“Riley has shown us how you can’t let something like SMA totally define your life,” Alex said. “We were going to give Shepard the best life no matter the outcome; SMA would not define him.”

The genetic test at Norton Children’s Hospital confirmed Shepard had SMA. The family was prepared and ready to embrace the challenges of this disease. Shepard’s cry was loud, and he had strong movements after birth, not the typical signs of SMA.

At 16 days old, before any indication that SMA had caused damage, Shepard was injected with his first dose of Spinraza.

“Dr. Lakhotia and her neurology team did an amazing job of staying on top of things, making sure we had everything that we needed at our disposal,” Alex said.

“At 7 months old, Shepard continues to grow even stronger,” Alex said. “He continues to hit milestones such as rolling over and sitting up on his own. He eats orally. He squeals loud. Shepard walks around in his walker and pulls things off the counters.”

Shepard was recently approved for yet another new treatment, Zolgensma, to restore a copy of the SMN1 transgene in a single injection. The treatment is approved only for SMA patients less than 2 years old.

The hope is that once the SMN1 transgene is in the cell, it will continue to make the SMN protein indefinitely.

Your generosity helps bring the latest treatments for SMA and other conditions to families across Kentucky and Southern Indiana.

“I would not be the person that I am today if it wasn’t for Riley and Shepard,” Alex said. “My hope is that Shepard walks. My hope is that Riley will eventually walk as well. We know that it may not ever happen, but we also continue to try and push them both. Now 4 years old, Riley sits up on her own and scoots all over the floor. She is learning to crawl with improved strength.”

Riley will continue to receive a maintenance dose of Spinraza every four months. Shepard will be monitored on a regular basis for his response to the single dose of Zolgensma.

“I consider the Haas family an extension of my family,” said Kristen Riley, APRN, PNP-PC, nurse practitioner with Norton Children’s Neuroscience Institute at Norton Children’s Outpatient Center – Paducah. “It is inspiring to see how far Riley has come from day one of diagnosis and now to see Shepard responding to the treatment at such a young age. “

“Positivity is critical in all aspects of SMA, even when days are hard,” Alex said. “Parents with a child diagnosed with this disease must continue to remain hopeful in the research and advanced treatment options impacting these children.”