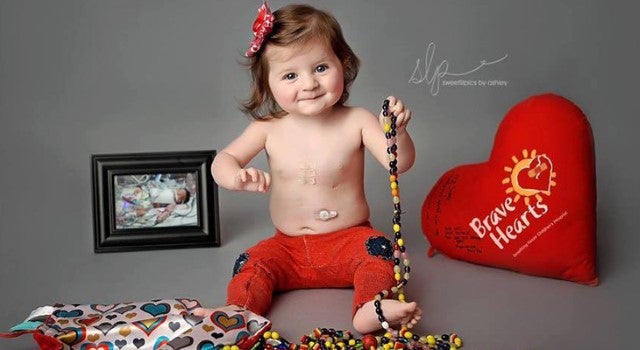 Cari and Kyle Whalen were ready for their standard anatomy ultrasound around the 24th week of Cari’s pregnancy. They knew they were having a girl, so this was to be a routine check of the baby’s brain, spine, abdomen and heart.

But the result was anything but routine.

“The ultrasound technician noticed something, and we could tell there was a concern,” Cari said. “The test was being done in the office of an obstetrician who specializes in high-risk pregnancies, so he was able to come in and take a closer look.”

What they found was a heart defect, though the specifics were not entirely clear at the time. The Whalens were sent to the children’s hospital’s heart center, where they met Brian J. Holland, M.D., pediatric cardiologist with University of Louisville Physicians.

“During pregnancy, we can get a good idea of what is going on with the developing heart using specialized ultrasound testing called a fetal echocardiogram,” Dr. Holland said. “Once we identify a heart problem, it is important to monitor things closely over time as the baby continues to develop and grow.”

Around 34 weeks, another defect surfaced. This one made things much worse. It was total anomalous pulmonary venous return, or TAPVR, which meant that the four veins taking the blood from the lungs to the heart did not attach properly to the left upper chamber in the heart. Instead, they went to the wrong part of the heart.

“That cracked us and made it really, really hard,” Cari said. “I didn’t want a baby shower. I didn’t even want to make up her room. I didn’t know what was going to happen.”

You can help today

It takes the commitment of everyone to help Norton Children’s fulfill the mission of providing for the physical and emotional health of all children.

The Whalens met with Erle H. Austin III, M.D., pediatric cardiovascular surgeon at the children’s hospital and U of L Physicians. He described what needed to be done to give their baby a chance — possible open-heart surgery at just hours old.

She was strong enough that Cari was able to hold her for about 5 minutes — something she wasn’t sure she’d even be able to do. Then the children’s hospital neonatal intensive care unit specialists got to work reducing the amount of stimuli and stress on Emma Grace’s heart. The longer heart surgery could be avoided, the better.

At 18 hours old, Emma Grace’s heart could wait no longer. Dr. Austin and the heart center team went to work to repair her heart.

Dr. Austin found not two but four heart defects that all affected circulation and would surely have caused death if left untreated. In the operating room, he was able to repair the defects, but the extent of the repairs meant that Emma Grace’s chest would need to remain open for several days.

After surgery, Dr. Austin followed Emma Grace to the “Just for Kids” Critical Care Center and sat watching her for several hours, making sure she’d be OK.

“He wasn’t ready to leave her side because he thought he might be needed,” Cari said.

Emma Grace continued to fight but had a few setbacks, as is common in children with complex congenital heart defects.

One day Emma Grace’s heart rhythm was off and her temporary pacemaker was not regulating it. The only option was to stop her heart completely and then restart it.

“Our nurse warned me what was going to happen, but it was so scary,” Cari said. “We all watched the screens go dark and then they gave her medicine and brought her back. It worked! It completely reset her heart and it started beating correctly.”

Emma Grace’s heart began to get stronger, but other issues arose. She developed a feeding intolerance, which meant she had to be fed through a tube; a frozen diaphragm, which caused her lungs not to function properly; and chronic lung disease that causes low oxygen levels and makes it difficult for her to breathe. This last, rare disease is often fatal.

Through it all, the Whalens remain hopeful. Emma Grace’s breathing could improve over time, as lung tissue reproduces until around age 7.

Her first stay at the children’s hospital was 10 weeks, but she’s been back numerous times.

“At almost 1 year old, she’s had a total of eight surgeries, but she’s getting stronger, going to therapy and starting to be interested in food,” Cari said. “Because of all the issues she’s had and the length of time she was on a ventilator and in the hospital, she still doesn’t understand putting things in her mouth.”

The family credits the children’s hospital team for their expertise that has helped get Emma Grace and the entire family to where they now are.

“Our nurses were constantly doing special things for us so that I could still have the mom-with-baby experience,” Cari said. “They helped me dress her up for Halloween, they made Christmas ornaments with her toe prints and they knew I liked bows, so she always had one in her hair.”

“It has been a roller coaster ride, and we know there are more challenges ahead,” Cari said. “We’re looking forward to celebrating her first birthday – something we didn’t know at first if we’d ever get to do.”

Approximately eight out of every 1,000 children are born with congenital heart disease, which translates to about 450 children each year in Kentucky alone. About one-quarter of these children have what is considered critical heart disease that will require either catheter-based or surgical intervention within the first year of life. These defects may involve the heart valves, cardiac chambers, blood vessels in or around the heart and lungs, the heart muscle itself or cardiac rhythm. Any of these may be quite serious if not properly addressed by a pediatric heart specialist.

The children’s hospital, working with specialists from U of L Physicians, is home to the heart center, which provides comprehensive services for patients of all ages born with heart defects (congenital heart disease) and for children with acquired heart conditions. It is also the only pediatric heart failure and transplant program in the commonwealth of Kentucky.

For more information, call (502) 629-KIDS. Or, support these critical services offered to children by making a donation to the Jennifer Lawrence Heart Center Challenge.