Responsive neurostimulation system gives teen with epilepsy her life back

Responsive neurostimulation system gives teen with epilepsy her life back 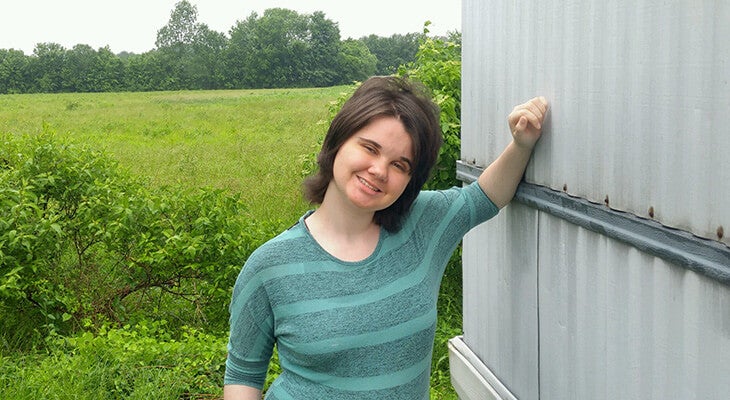 When Destiny Beavin tackled her 260-pound brother to the ground, it was cause for celebration. Not just because he’s quite a bit larger than his younger sister, but also because Destiny used her right arm for the takedown. That arm — and the rest of her right side — had been severely weakened by seizures less than a year ago.

The Hartford, Kentucky, teen has dealt with focal epilepsy since she was 3 years old. She had multiple seizures a day, shaking for minutes at a time and collapsing. They impacted every aspect of her life.

“I felt like I was flopping around like a fish,” Destiny said. “I couldn’t breathe, couldn’t see. It was very scary.”

The lesion causing Destiny’s seizures was in a difficult spot in her brain. It overlapped the area that controlled the right side of her body. After having a seizure, she would have an extremely difficult time walking and had little function of her right arm.

“She was very depressed,” said James Beavin, Destiny’s father. “She couldn’t go out and be a normal teen. She pretty much stayed inside all the time.”

Destiny had been under the watchful eyes of  Vinay Puri, M.D., child neurologists with Norton Children’s Hospital and University of Louisville Physicians. They had been working to control the seizures with medication, because surgery to remove the lesion would likely render Destiny’s right arm completely paralyzed.

“The medications weren’t working like we had hoped,” Dr. Skjei said. “We decided to explore other options.”

Dr. Skjei started researching a new, innovative technology known as the NeuroPace Responsive Neurostimulation System, or RNS. The RNS is similar to a heart pacemaker. The device is attached to the skull with electrodes implanted in and around the lesion. The system constantly monitors for seizures and interrupts them without the patient feeling a thing.

Our renowned pediatric neuroscience team incorporates some of the most advanced diagnostic systems available to evaluate and diagnose each child for a full spectrum of spine and brain conditions. Our team of highly skilled neurologists and neurosurgeons develop customized treatment plans to meet the needs of your child while involving your family in every step, from diagnosis to treatment and beyond.

Norton Healthcare has implanted several of the devices in adult patients, but Destiny is the first child in Kentucky and among only a few dozen children in the country to receive the implant.

“Ideally, we want to remove areas that cause seizures,” Dr. Mutchnick said. “But after careful mapping of Destiny’s brain, we felt that it would be better to leave it and carefully place RNS electrodes to hopefully stop the seizures and leave her with a right arm that worked well.”

Dr. Mutchnick performed Destiny’s 10-hour procedure in August 2017. Several months after the operation, they turned on the device.

The result was what everyone hoped for. Destiny hasn’t had a seizure in nearly six months, and function in her right side has drastically improved.

Another benefit of the RNS is that it transmits data about Destiny’s brain activity to her doctors.

“This allows us to see any seizure activity, even if Destiny can’t feel it,” Dr. Skjei said. “It also can allow us to assess her medications and make changes if needed.”

Destiny has gained a new outlook on life. She’s going out, making friends and is looking to get her driver’s permit.

“It changed my life — it gave me a life,” Destiny said.

“She’s a completely different person,” James said. “I’m so grateful to the doctors at Norton Children’s for helping Destiny.”

Dr. Mutchnick also couldn’t be happier with the outcome.

“It’s always great to help a patient overcome their challenges,” he said. “I expect we’ll be performing more of these RNS procedures in the future.”