Ava Bale was diagnosed with and recovered from congenital diaphragmatic hernia (CDH). 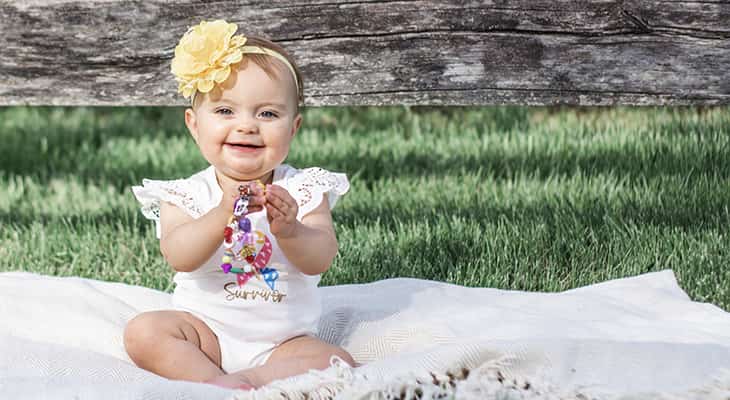 When Leacoln Bale got a thumbs-up on her 20-week prenatal scan, she and her husband, Jeremy, felt relief. The scans looked great, and they were thrilled about having another healthy baby girl.

Like her two older sisters — Ellie, 6, and 3-year-old Nora — Ava was born at home with assistance from a midwife. But with Ava, things got tricky soon after her birth in April 2020. She seemed fine when a midwife and emergency medical technicians examined her, but several hours later, the Bales noticed that Ava’s breathing was labored and irregular, especially after she nursed for the first time.

Following the advice of their midwife, the Bales took Ava to Norton Children’s Hospital.

“During the drive, her skin began to turn purple,” Leacoln said.

After a harrowing ride, at the hospital Ava was quickly diagnosed with a rare birth defect: congenital diaphragmatic hernia (CDH).

The diaphragm muscle that separates the chest from the abdomen had a hole in it throughout her development. Intestines and other organs can squeeze through the hole while in utero, putting pressure on the lungs and other organs in the chest. The lungs are typically smaller than they should be, and blood vessels aren’t as developed, causing high blood pressure in the lungs.

The result can be severe breathing issues, as Ava was experiencing hours after birth.

Cynthia Crabtree, D.O., and Keri A. Marques, M.D., neonatologists with Norton Children’s Neonatology, affiliated with the UofL School of Medicine, requested the assistance of a pediatric general surgeon and a pediatric cardiologist to treat this condition rarely seen in the neonatal intensive care unit (NICU).

CDH is most severe when symptoms show shortly after birth. If a child goes on longer without symptoms, it’s likely a less severe case.

“We think this is because the lungs have more time to grow before the intestines move into the chest and start squishing them,” said Tiffany N. Wright, M.D., pediatric general surgeon with Norton Children’s Surgery, affiliated with the UofL School of Medicine. “Even so, it is fairly remarkable that Ava was born at home, where she cried, swallowed air and nursed for several hours.”

Although Ava was in significant distress when she arrived at the hospital, she improved quickly once she was placed on a ventilator and a tube was put into her stomach to decompress her intestines. After Ava stabilized, Dr. Wright repaired the diaphragm through a minimally invasive technique that uses small incisions and a camera.

Babies with CDH may have ongoing health issues that need medical attention during the first few years of life, from respiratory issues to gastroesophageal reflux and feeding difficulties.

Ava’s family likes to say she came with some assembly required.

“When we left the [neonatal intensive care unit], her cardiologist, Edward S. Kim, M.D. [with Norton Children’s Heart Institute, affiliated with the UofL School of Medicine], told us we were bringing home a pretty much normal baby,” Leacoln said. “We just couldn’t have asked for anything better.”

Ava, now 15 months old, receives follow-up care from her team of specialists, including neonatologists; pulmonologists; cardiologists; dietitians; and speech, physical and occupational therapists all in the same visit.

Depending on the condition, children also may be treated or receive follow-up care at a multidisciplinary clinic.