How to prevent common school illnesses and injuries

How to prevent common school illnesses and injuries

Sharing classroom supplies, close contact on the playground and seasonal viruses lead to missed school days and visits to a healthcare provider. 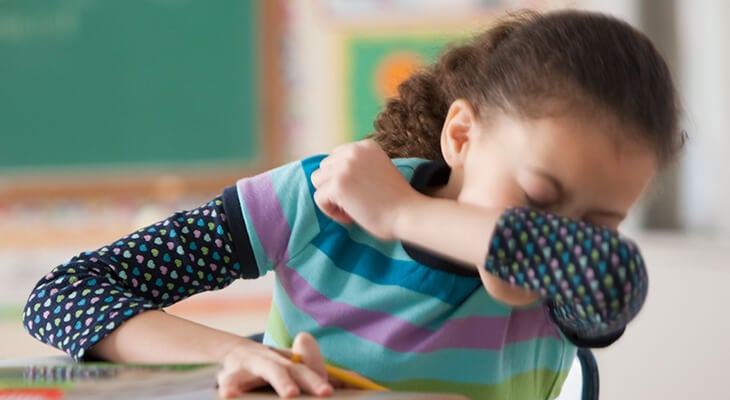 School is a place for learning, creating and socializing. However, it also can be a place where illnesses spread and injuries happen.

Strep throat, which is very common among young children and teens, is a contagious bacterial infection accompanied by fever, swollen lymph nodes and white patches on the roof of the mouth. Sometimes a fever may accompany a sore throat. Most sore throats are caused by viruses and go away on their own.

Not all sore throats are caused by strep. A strep infection can be verified and diagnosed by special testing at the doctor’s office. According to Dr. Mims, testing and treating strep throat early reduces the duration of symptoms and prevents complications, such as rheumatic fever.

Pinkeye, also called conjunctivitis, appears as redness in one or both eyes. It often is accompanied by drainage, discharge and itchiness.

“Pinkeye is one of the most contagious illnesses we see during the school year,” Dr. Mims said. “Yet a diagnosis by parents and caregivers is made more complicated because redness of an eye can be from allergies or lack of sleep too.”

Pinkeye can be caused by a virus or bacteria. A viral infection will go away on its own. Waking up with one or both eyes sealed shut may be a sign of bacterial pinkeye. In this case, the child might need antibiotic eye drops before returning to school.

New to parenthood? New to Louisville? Looking for a pediatrician?

Preventive measures, such as good hand washing and not sharing towels, pillows or personal items, will help keep an infection from spreading at home.

Head lice is one of the most discussed and confusing school-related conditions.

“Though there are many misconceptions about head lice, it is not dangerous and often does not require children to miss multiple school days,” Dr. Mims said.

Teachers, parents and students often see lice on the scalp, where they lay eggs, called nits. Nits attach to the scalp or hair follicles and cause moderate to severe itching.

“Parents sometimes see white flakes on a child’s shoulder or clothes and assume it’s head lice,” Dr. Mims said. “The general rule is if it flakes, it’s not head lice.”

Getting rid of head lice can be challenging. Dr. Mims advises using an FDA-approved, over-the-counter treatment. In addition, lice and nits should be removed from wet hair with a fine-toothed comb. Children with head lice should not share pillows or combs with others in the house, or have head-to-head contact with others.

In addition to playing sports, students are in close contact on the playground during recess and are active in physical education classes.

“We see a lot of strains, sprains, bumps and bruises — and for most of those, if there is swelling and pain associated, they need to be evaluated right away,” Dr. Mims said.

Dr. Mims warned that children in elementary and middle school are still skeletally immature and can have an undetected injury.

“We don’t see a lot of sprains in those age groups. For example, a rolled or sprained ankle might actually be a growth plate fracture with the same symptoms and we would need to evaluate (it) a little closer,” Dr. Mims said.

Before seeing a physician, Dr. Mims said that following the RICE steps — rest, ice, compression and elevation — is a great way to kick-start recovery.