When families hear that Gregory N. Barnes, M.D., has a son with autism, the relief and connection of shared experience is immediate. 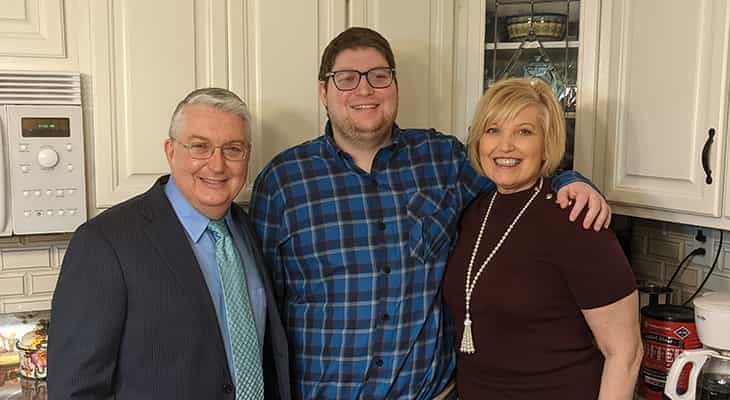 For the past 25 years, Gregory N. Barnes, M.D., PhD. has worked with thousands of families to help diagnose, adapt to and overcome autism. Autism is personal to Dr. Barnes, whose son, Joshua, was diagnosed with the condition as a young child.

It was clear to Dr. Barnes, a pediatric neurologist with the Norton Children’s Autism Center, affiliated with the UofL School of Medicine, and his wife, Kay, that something was off when Joshua was a baby.

“He did not sleep at all, so he already had a sleeping disorder, which occurs in 60% of patients with autism,” Dr. Barnes said. “Secondly, very early on, besides speech delay, in the speech that he did have, — he manifested what’s called a restricted interest.”

Restricted interest is a characteristic symptom where the child gets fixated on something they can’t shake.

Joshua was diagnosed with autism at age 4, when Dr. Barnes was in Massachusetts as a physician resident at Boston Children’s Hospital and Harvard Medical School in 1997. At the time, Dr. Barnes was completing a fellowship for advanced training in epilepsy.

“When I was in medical school, I’d never even heard of the term autism spectrum disorders,” he said. “There was so little information then.”

“The only thing you knew of autism was ‘Rain Man’ with Dustin Hoffman,” Kay said, in reference to the 1988 film. “It was extremely hard because it’s a world in which the normal learning process is nonexistent. Your child doesn’t play with other children — they might just hit them, or push them away, or take something away from them. Having a child with autism feels very isolating.”

Family-centered care with a focus on helping children and families meet their goals through collaboration with the area’s leading autism resources.

As time went on, Dr. Barnes found himself seeing autism patients in addition to epilepsy cases. His personal journey allowed him to connect to the families. Before he knew it, Dr. Barnes was treating more autism cases than anything else. He was then asked to serve as a member of the Autism Speaks Autism Treatment Network.

“From a professional standpoint, I saw this as an opportunity to use my knowledge to contribute to the disease that my son had,” he said.

For the past seven years, Dr. Barnes has treated autism patients through Norton Children’s and the University of Louisville School of Medicine. He said his ability to relate to his patients and their families is very beneficial.

“You can look a family right in the eye, no matter whether you’re in the clinic or when you’re on Zoom, and say, ‘I have a 27-year-old son with autism.’ Then all of a sudden there’s this huge sigh of relief, sometimes audible, but certainly it’s on their face, of, ‘You know what I’ve been through,’” he said.

It also helps him develop a plan for care.

“I have always told people that having Joshua gives me an enormous advantage,” Dr. Barnes said. “I know the questions to ask. Also, parents aren’t afraid to tell me what’s really going on, so I get a better, more accurate history. Being able to take what I’ve learned from my own situation has been an enormous contribution to the care of my autism families.”

When Joshua first was diagnosed, there were few therapies and services for autism. Fortunately, those options are growing.

According to Dr. Barnes, treating autism also requires an approach that brings in specialist providers from many fields.

Hope for the future

Joshua continues to seek treatment for his autism, but he’s come a long way. He has a job through a UPS program for people with cognitive mental disabilities and spends his spare time playing video games, reading his Bible, and talking on the phone or Skype. He’s also learning some important life skills, like cooking and cleaning.

“Our dreams are the same as many autism families,” Dr. Barnes said. “We want our son to do well and be happy. It’s a daily challenge, but we see progress all the time. My goal is to help Joshua and all my patients live the best lives they can.”

“We hope that at some point Joshua will be able to live on his own, with support,” she said. “It’s important for us to know that he’ll be OK when we’re not around anymore.”