Periods: What is “normal?”

Periods: What is “normal?”

No two periods are the same, however, there are some signs your daughter may need to see a pediatric and adolescent gynecologist. 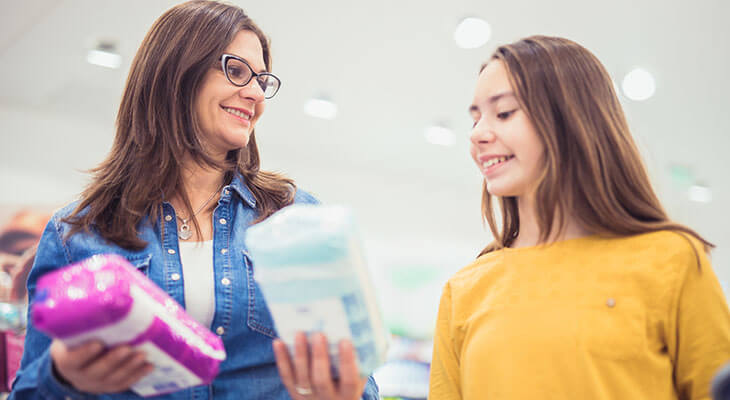 No two periods are the same, however, there are some signs your daughter may need to see a pediatric and adolescent gynecologist.

“The menstrual cycle can be thought of as another vital sign, just like height, weight and blood pressure,” said Paige Hertweck, M.D., Norton Children’s Gynecology. “It’s important to keep track of the age at which menstruation began, how often a girl is having a period and what the flow is like.”

Knowing these things can help determine if there are issues to be concerned about.

On average, girls in the United States get their first period around age 12. This typically is two to three years after breast buds develop. Those buds signal the start of estrogen flowing in the body.

“In the last 30 years, this age has not changed,” Hertweck said. “Though, we do see girls in the non-Hispanic, African-American population getting their periods at younger ages. Girls who are heavier in weight also sometimes start their periods earlier.”

If a girl does not develop breast buds by age 13 or does not start her period two to three years after first getting buds, she should see a gynecologist.

Schedule an appointment with a pediatric/adolescent gynecologist. Call (502) 559-1750.

Girls should get their periods every 21 to 45 days. Counting begins on the first day of bleeding and goes until the start of the next period.

“While periods can be irregular, most girls do not go shorter than 21 days or longer than 45 days,” Dr. Hertweck said. “If a girl does not have a period for 90 days, that is very concerning.”

Those young women need to be evaluated to be sure there isn’t an underlying health issue, such as weight loss, polycystic ovarian syndrome, inflammatory bowel or celiac disease, thyroid dysfunction or excessive stress.

What is the flow?

The flow of a girl’s period also can help determine if there are any issues. Bleeding should happen for less than seven days and shouldn’t be so heavy that she goes through more than three to six pads or tampons a day.

“Needing to change a pad or tampon every one to two hours or a period lasting longer than seven days is not normal and should be evaluated,” Dr. Hertweck said. “We also get concerned about patients passing blood clots larger than a quarter, bleeding that results in soiled clothing and/or a history of easy bruising or a family history of blood disorders.”

Menstrual flow usually is heaviest on the first two days of a period and then gradually gets lighter.

Another thing to watch for is sudden abnormal bleeding or bleeding between periods.

“One of the best things to do is keep track of these things so they can be discussed with a physician,” Dr. Hertweck said. “It also helps you watch for anything abnormal.”

“Periods can be difficult to talk about, for both teen and parent,” Dr. Hertweck said. “But knowing this other ‘vital sign’ is important for health and wellness.”

If your daughter has any issues with starting her period, how often she is having her period or has heavy flow, she may need to see a pediatric and adolescent gynecologist.

Teen girls should first visit an OB/GYN between age 13 and 15, with subsequent annual visits. The first visit generally does not include a pelvic examination.